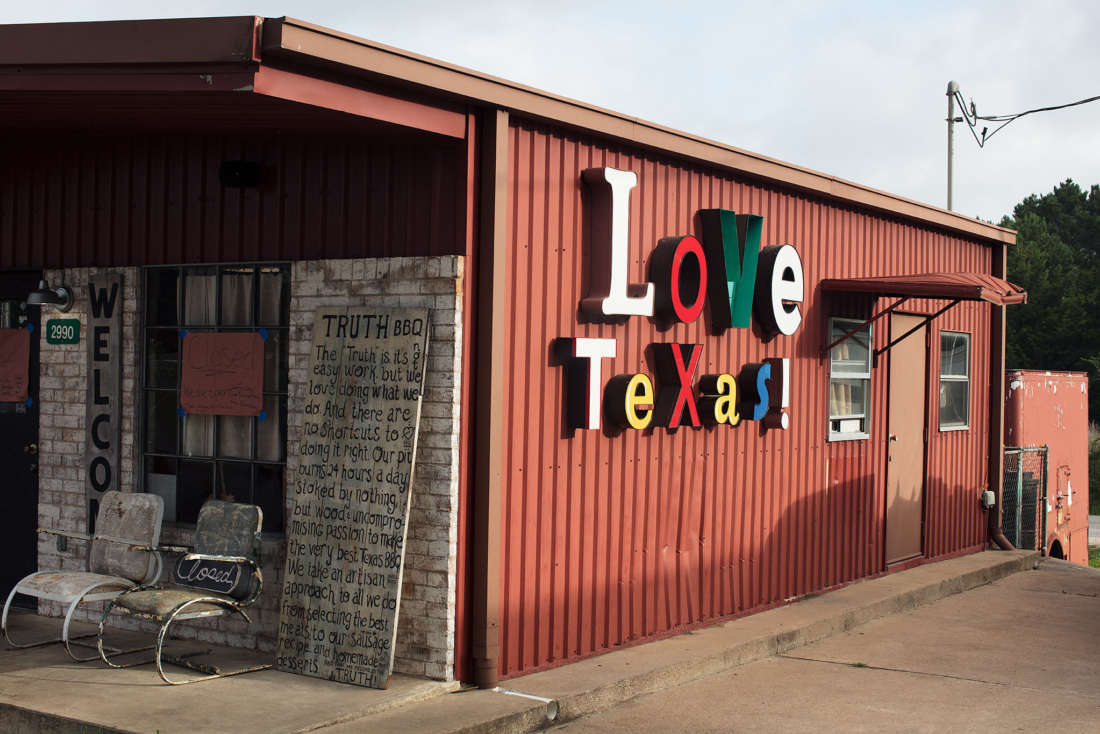 Barbecue is a serious pastime in Texas. In Austin, folks line up outside the doors to Franklin Barbecue at six in the morning so they are first in when it opens at 11. The barbecue enthusiasts bring camp chairs to sit on and coolers full of snacks and beer; they throw footballs and befriend the folks next to them who have also made the pilgrimage.

In a state full of barbecue it is “The List”, Texas Monthly’s Top 50 List, which ranks the top Texan barbecue joints. To be considered for The List your business must have been in operation for two years. Truth Barbecue in the small town of Brenham is run by 29-year-old Leonard Botello IV and only needed two years to make number ten on the prestigious list, just behind Texan greats like Franklin Barbecue, Snow’s BBQ, and Louie Mueller Barbecue. 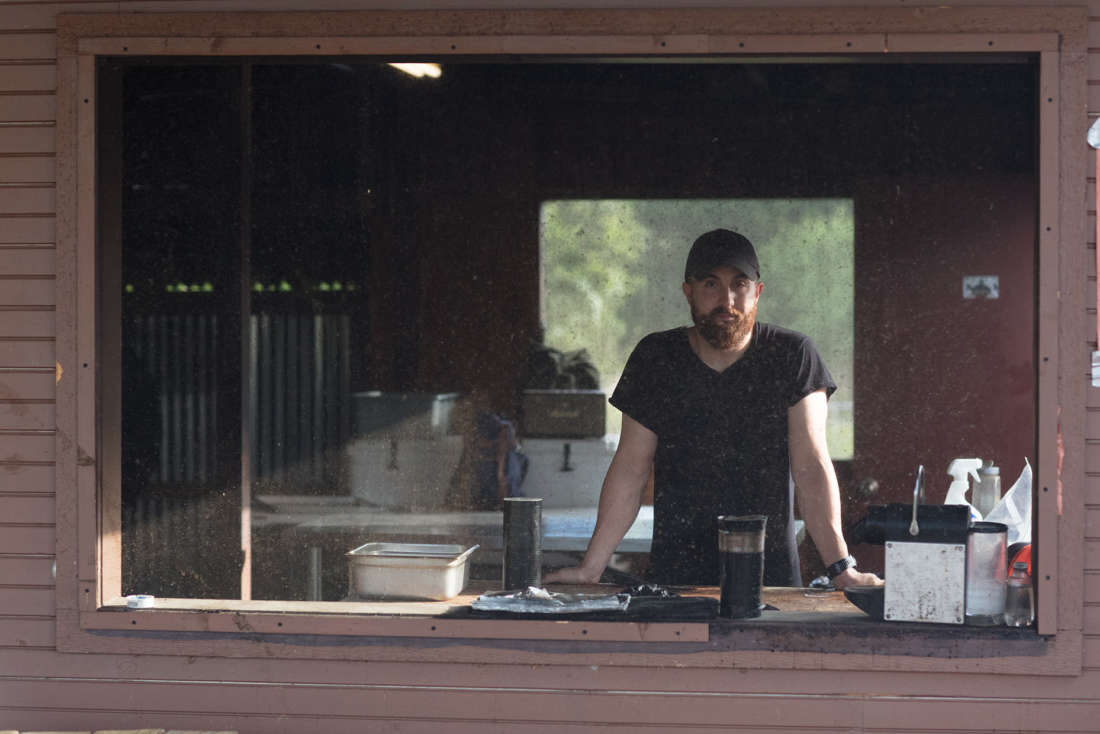 The sign leaning against the wall at the front of the small brick and tin building with a huge “Love Texas” on the side, spells out Leonard’s ethos:

“The truth is it’s not easy work but we love doing what we do. And there are no shortcuts to doing it right. Our pit burns 24 hours a day stoked by nothing but wood and uncompromising passion to make the very best Texas BBQ. We take an artisan approach to all we do from selecting the best meats to our sausage recipe and homemade desserts. And that my friends is the Truth.”

He’s not joking when he says it’s not easy. The smokehouse where the brisket and ribs cook is an easy 45 degrees celsius. When I ask the pitmasters to describe how hot it feels they struggle – like being in a small attic on a hot Texas day, a hot swamp, finally they say imagine squeezing inside your oven and turning up the heat. 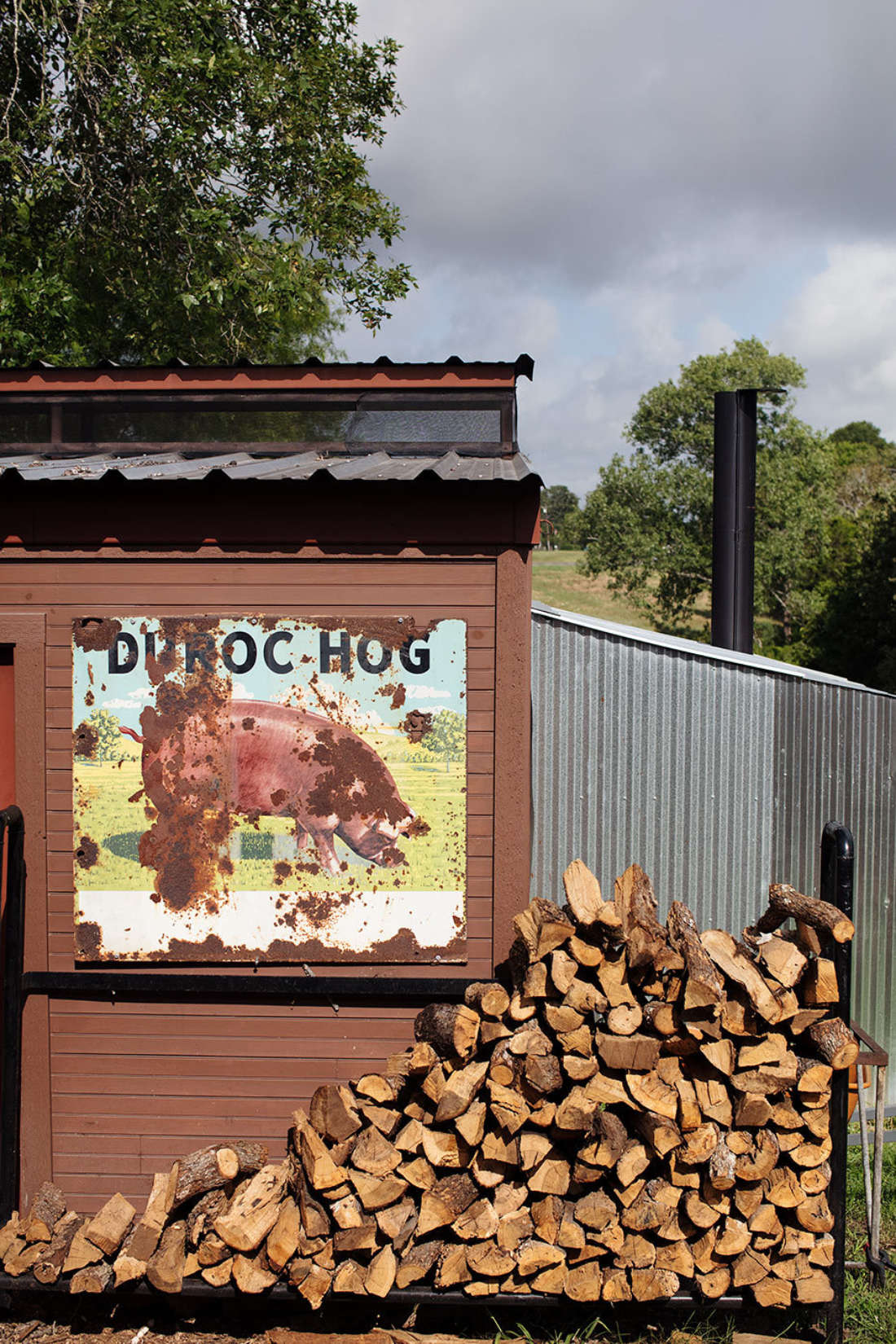 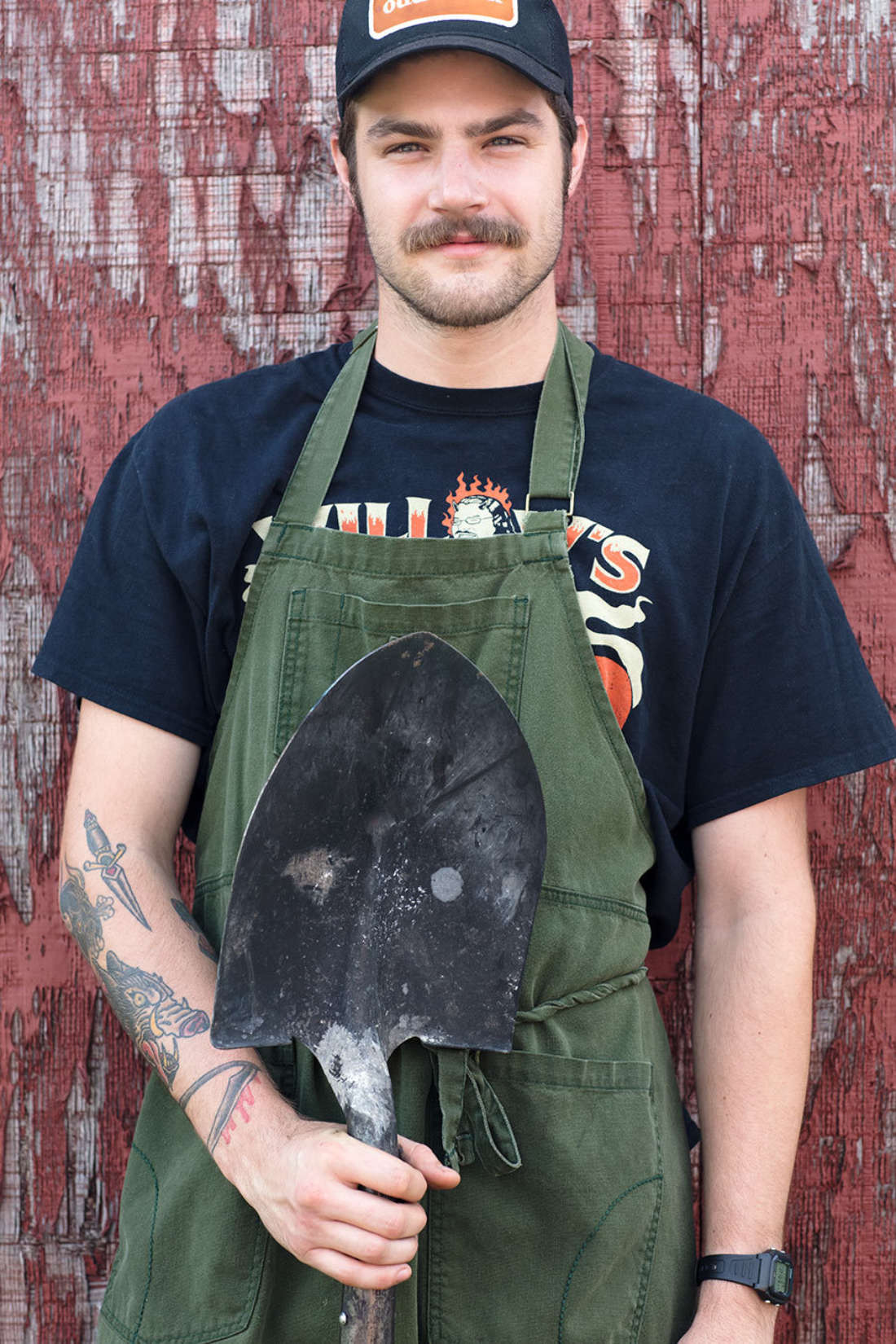 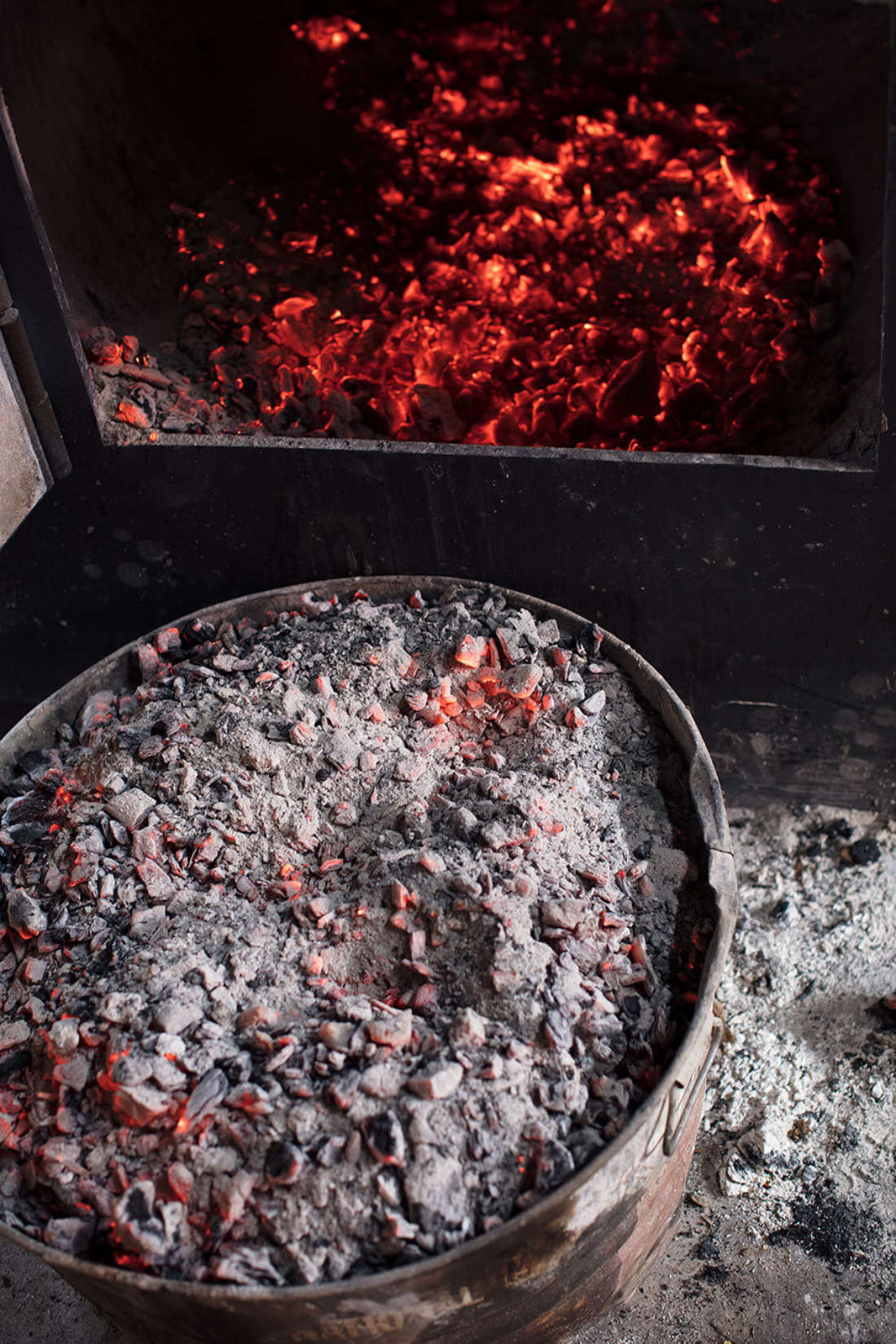 Then there are the mammoth hours. Over the three days they are open Leonard and his co-pitmaster Dylan Taylor work close to 80 hours and get three hours of sleep a night on camp stretchers pulled out in front of the counter, where a few hours later they will be carving the moist meat.

There is no exact science to cooking the perfect brisket, which combines the crunchy outer crust called the bark with the rendered buttery fat, and the juicy beefy interior, all into one unmistakeable mouthful. The weather plays a huge part in how the meat cooks, so the pitmasters are conscious of the wind, humidity and temperature outside the smokers as much as they are of trying to stoke the fires to a constant temperature.

Leonard has a detailed notebook of previous cooking times, temperatures and how the meat turned out. But he says there is no silver bullet and he learned to cook the perfect Texas barbecue through two years of trial and error. “You have to know everything is more by feel than by the books,” he says. “You can read as much as you want and do everything by the rules, but it’s not going to come off as good as if I was feeling it, touching it and doing it the way I think it should be done. You really have to know how it feels.”

When I ask Leonard’s fiancee Abbie Byrom what makes him such a successful pitmaster at the tender age of 29 she says, “It’s his patience. Like, so patient that sometimes you wonder if you’re still breathing patient. He has the ability to sit here and manage this business and check the fire every hour. He’s sleeping on a cot in the restaurant. Some people aren’t that patient, they’ll automate or use warming cabinets, which is great for economies of scale, but it isn’t authentic. It’s not true to the industry and how barbecue got started. Taking some shortcuts would make our lives easier and faster and mean he could sleep at home, but he’s not going to do that.” 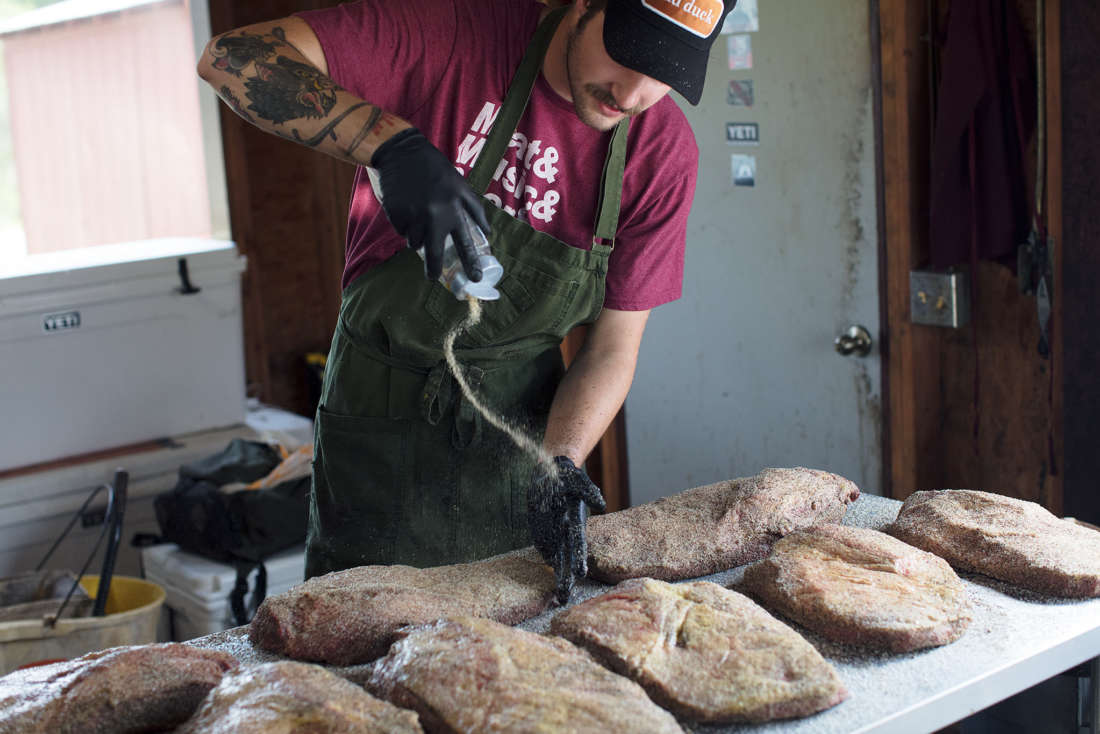 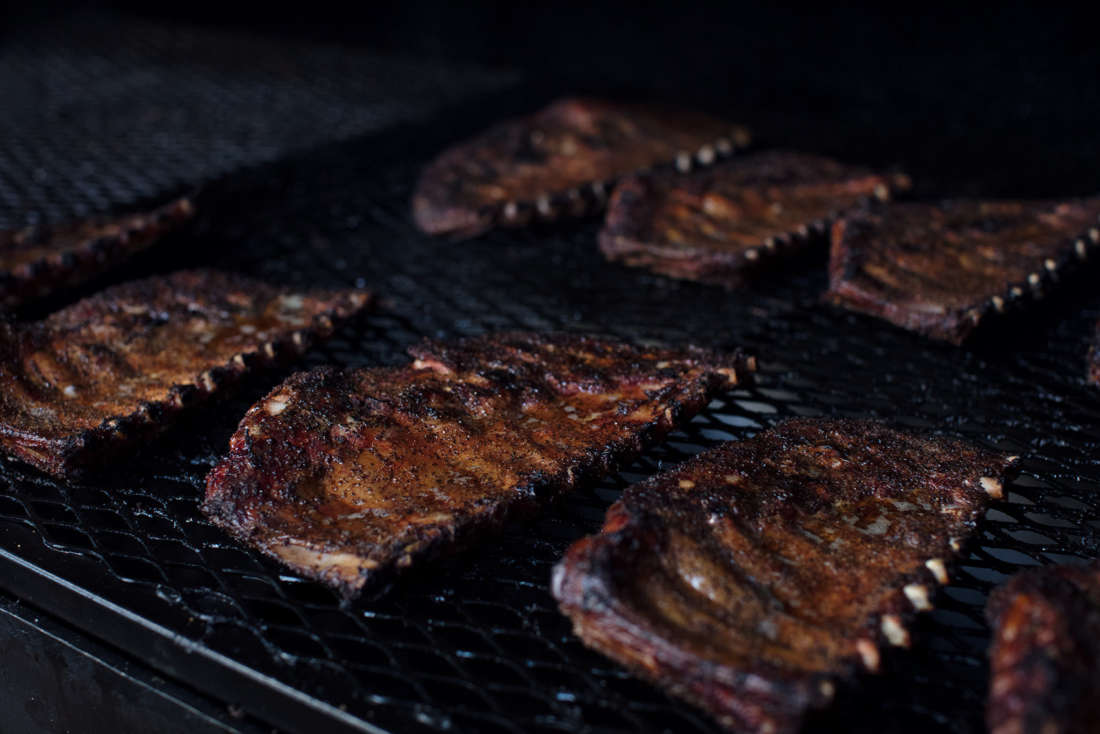 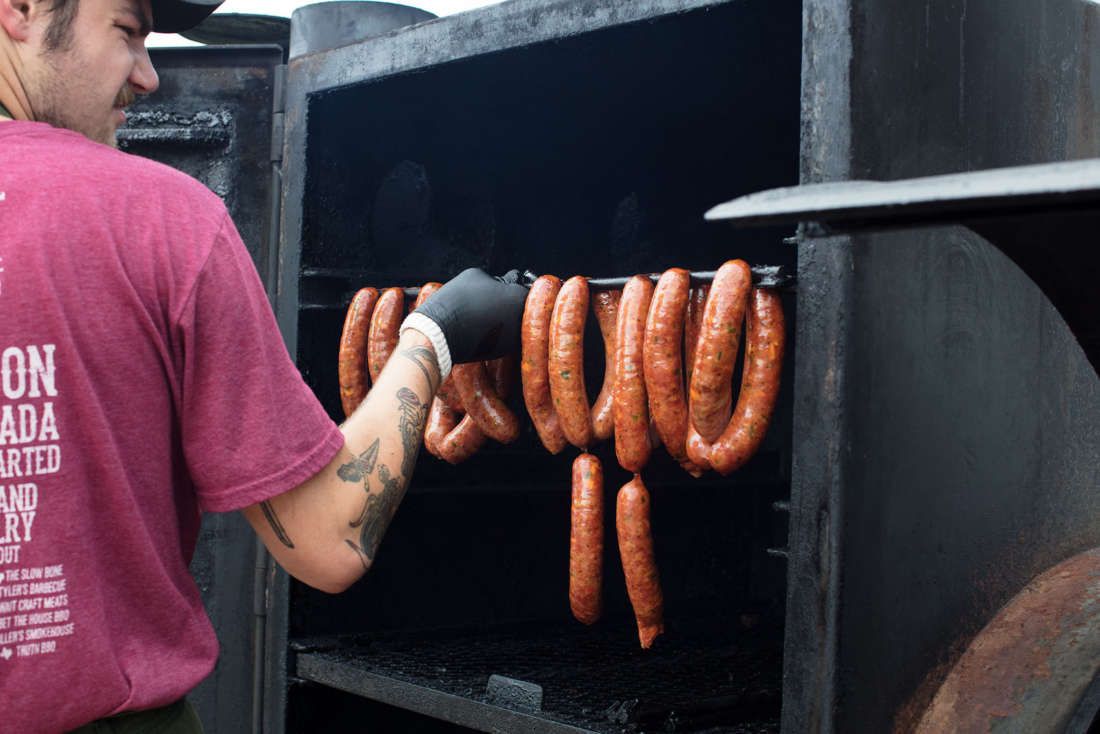 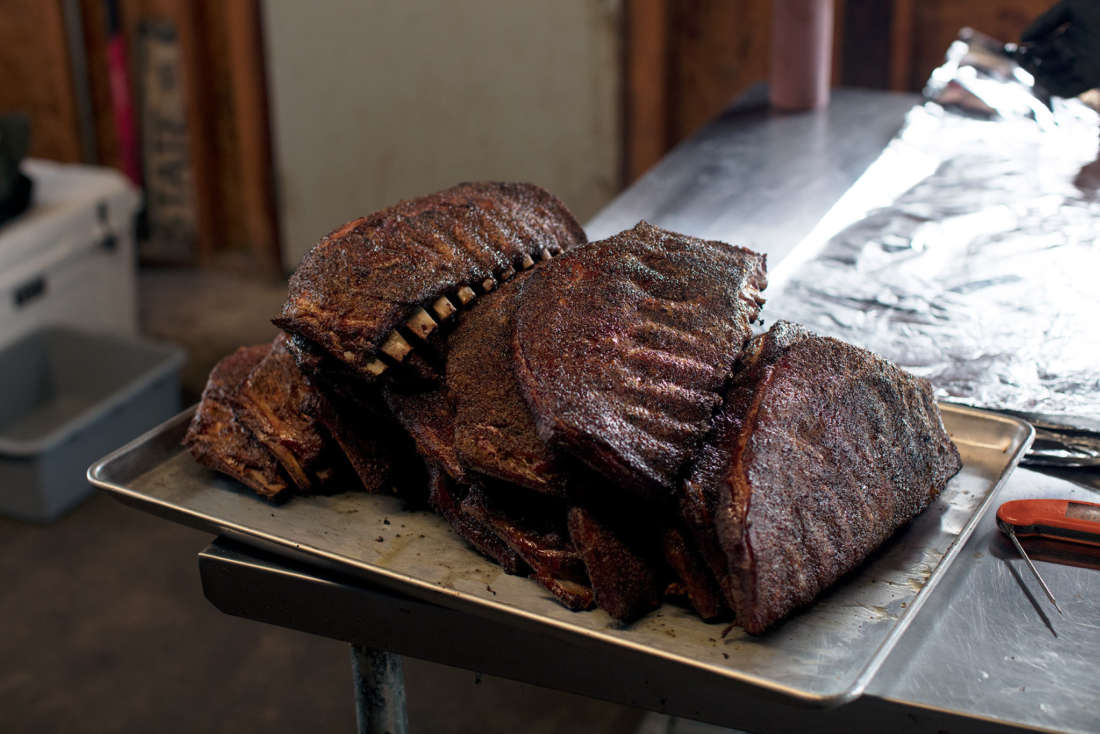 Just how good is the meat at Truth? Well, when Truth regular, Texas Governor Rick Perry recently dropped a piece of juicy brisket on the ground he picked it up, dusted off the dirt and ate it. That’s how good it is. Even Perry wasn’t going to waste a mouthful. Neither would any of the folks who flock to this small BBQ joint and wait for hours in the blistering heat until they get their chance to step up to the counter and order their tray of ribs, brisket and homemade sausages with a side of mac and cheese, corn pudding, collards and Leonard’s Mum’s homemade red velvet cake.

Now that word’s out the line at Truth has definitely extended. I’m there on a summer’s day when the morning is already sweltering at 36 degrees. Thankfully for those waiting there is a cooler full of free beer on the porch of the roadside shop. Andrew and Tammy Hart are also in the queue with me that day. They’re working their way through The List and Truth is the 18th barbecue joint they’ve visited over three weekends.

For Leonard and Dylan seeing all the people who have made the trek to eat the food they have spent 14 hours cooking through the night is what Dylan calls, “the payoff”. “That people are willing to wait in line for the food we cook is really gratifying,” he says.

Almost everyone I talk to in the line recognises the sense of community that comes with waiting for your chance at the counter. “You might have come with your friends but you’re most likely going to sit with complete strangers, drink a beer with someone and often have a great conversation with somebody because you’re all here for the same reason,” one customer says. 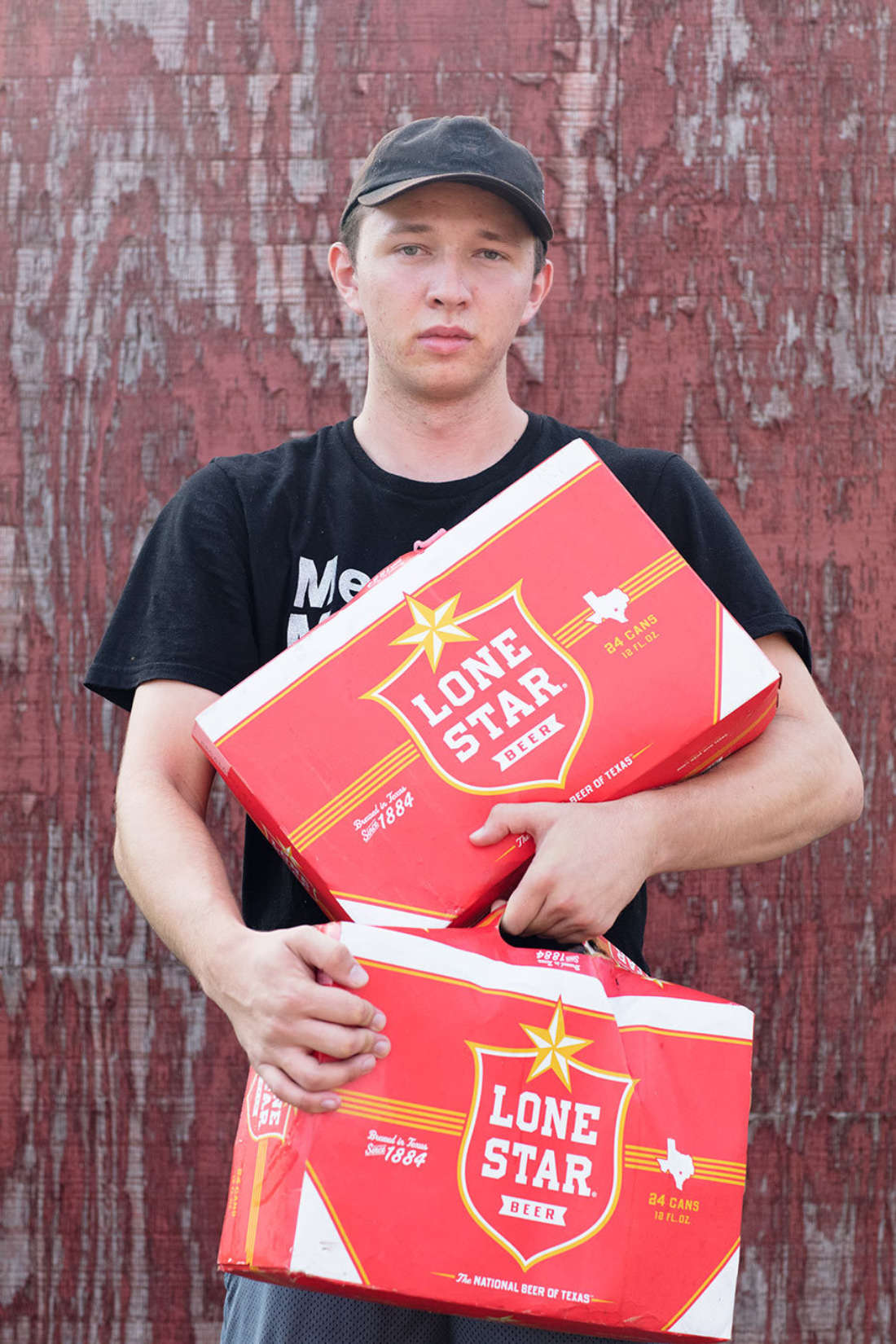 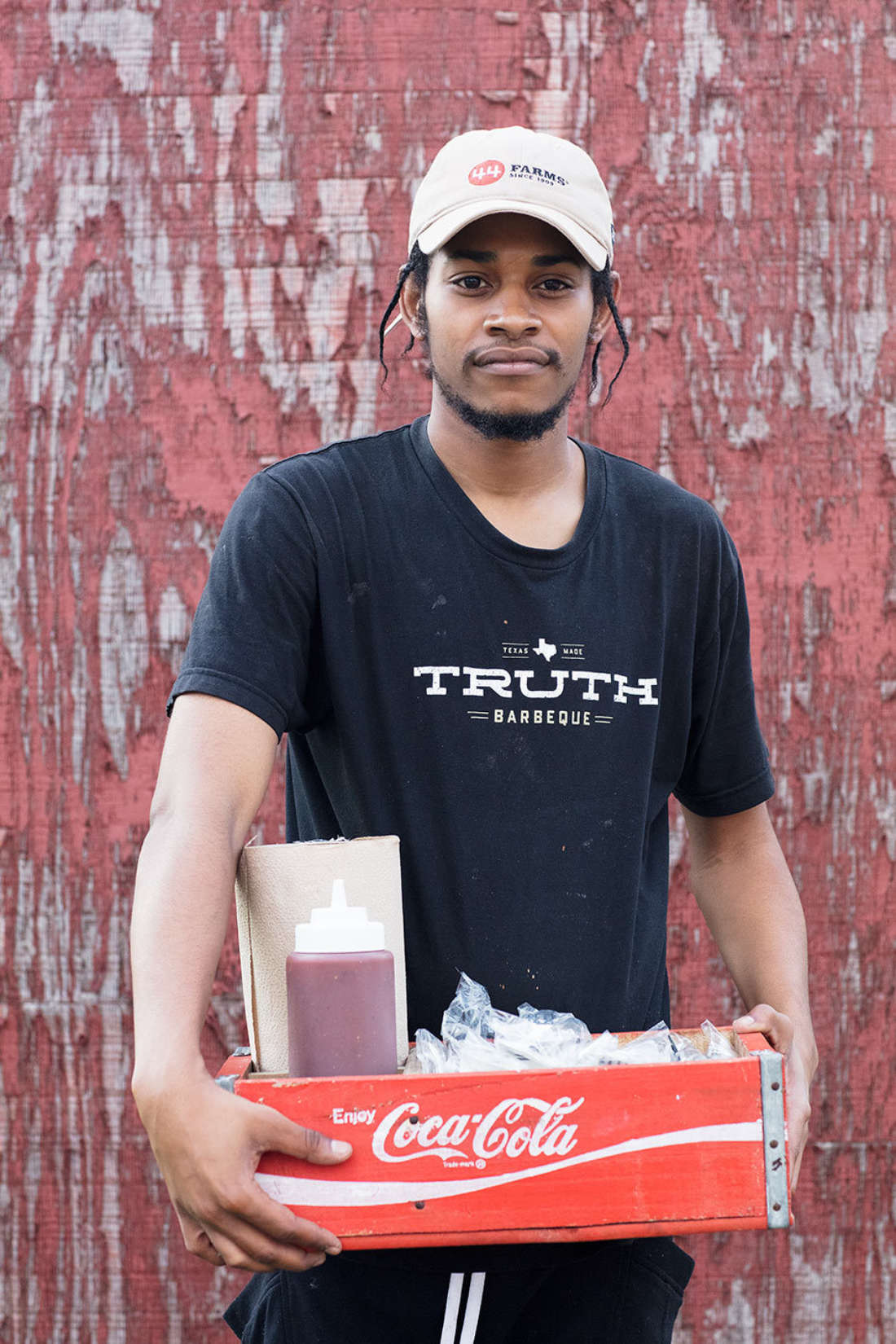 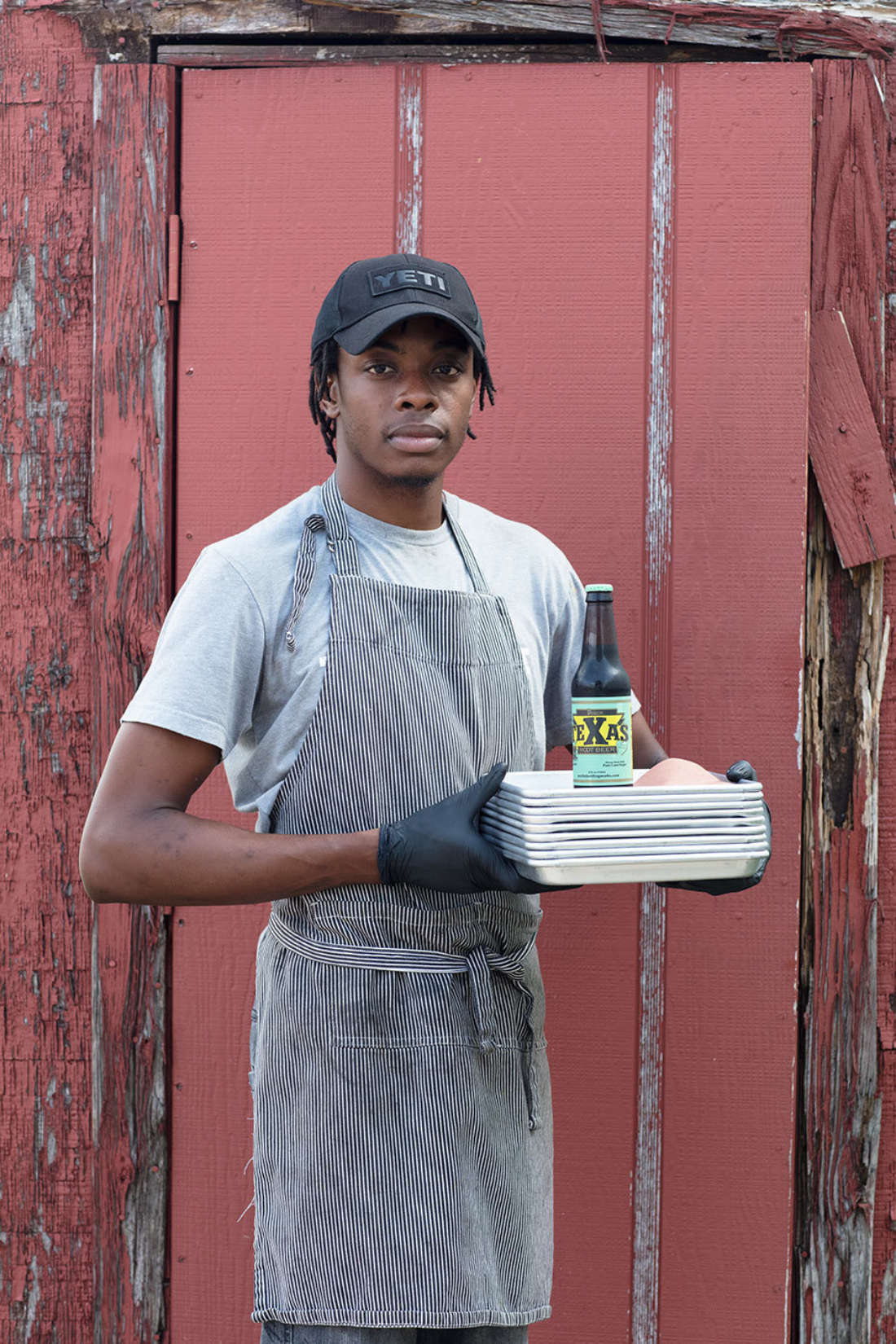 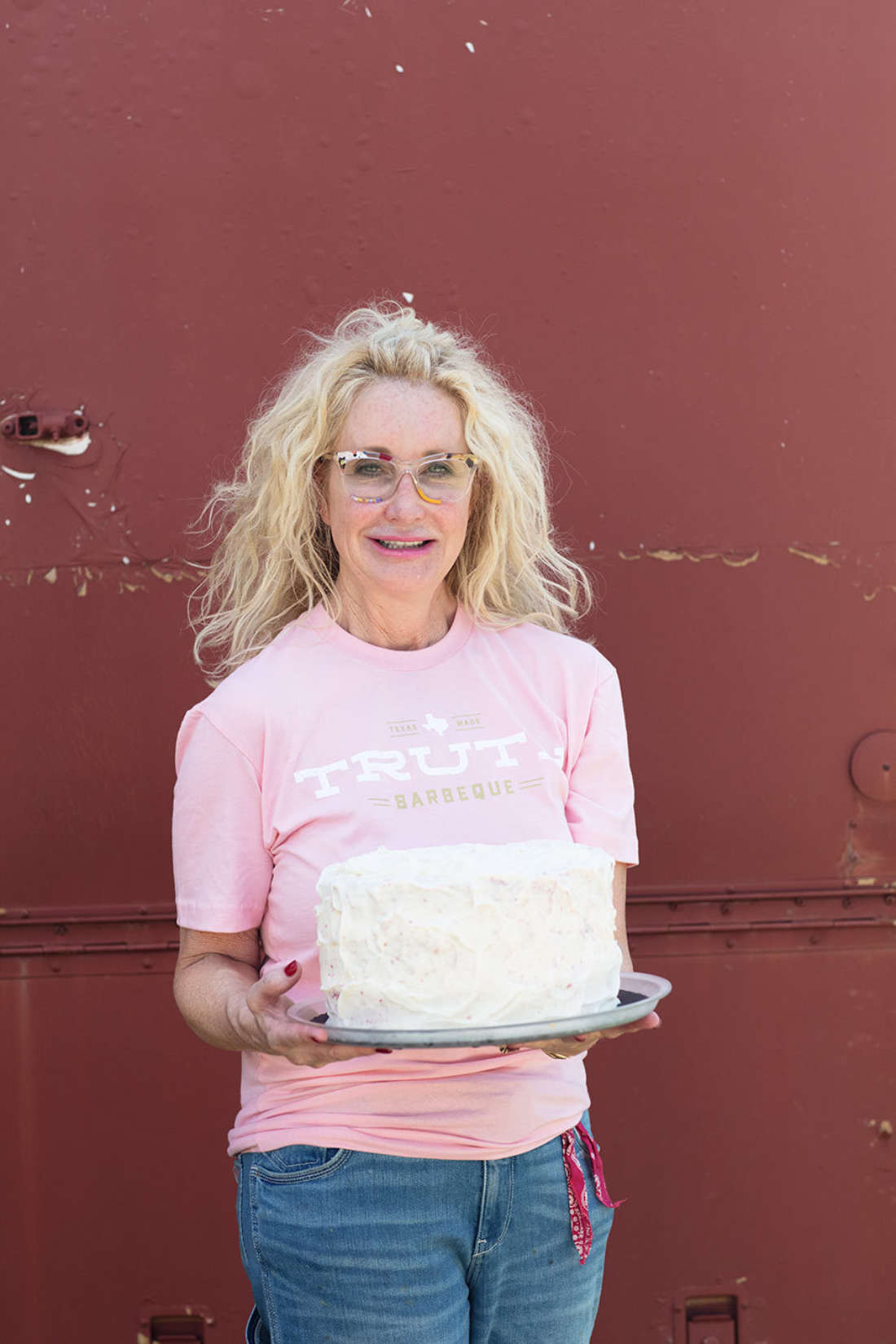 The camaraderie that comes with barbecue extends past the general public. Snow’s BBQ is number one on The List and one of their pitmasters is waiting in the Truth queue for his plate of brisket.

After working a crazy week cooking barbecue at Snow’s and shipping it all around the States, as well as feeding the crowd who show up on a Saturday, why does pitmaster Clay Cowgill drive 80km to eat at another BBQ joint on his day off? “I love barbecue and this is my favourite,” he says. “I like these guys, they are awesome people. I don’t know if I have had better cake. The brisket is so tender and fall apart and it’s got a great atmosphere. It’s one of the only places you can come and eat and listen to Howlin’ Wolf while you eat.”

For Leonard, he says his favourite part of the job is that Truth is where barbecue cooks come to eat. “There are a lot of pitmasters who eat here,” he says. “I think there is so much work involved and the pitmasters know how much work is involved.” Eating elsewhere for these pitmasters is out of love of the craft and respect. “We all know that no-one is cutting corners,” says Leonard. “Once you’re at this top tier level there aren’t any secrets it’s just hard work. So we drive each other and make each other better because of it, you know?” 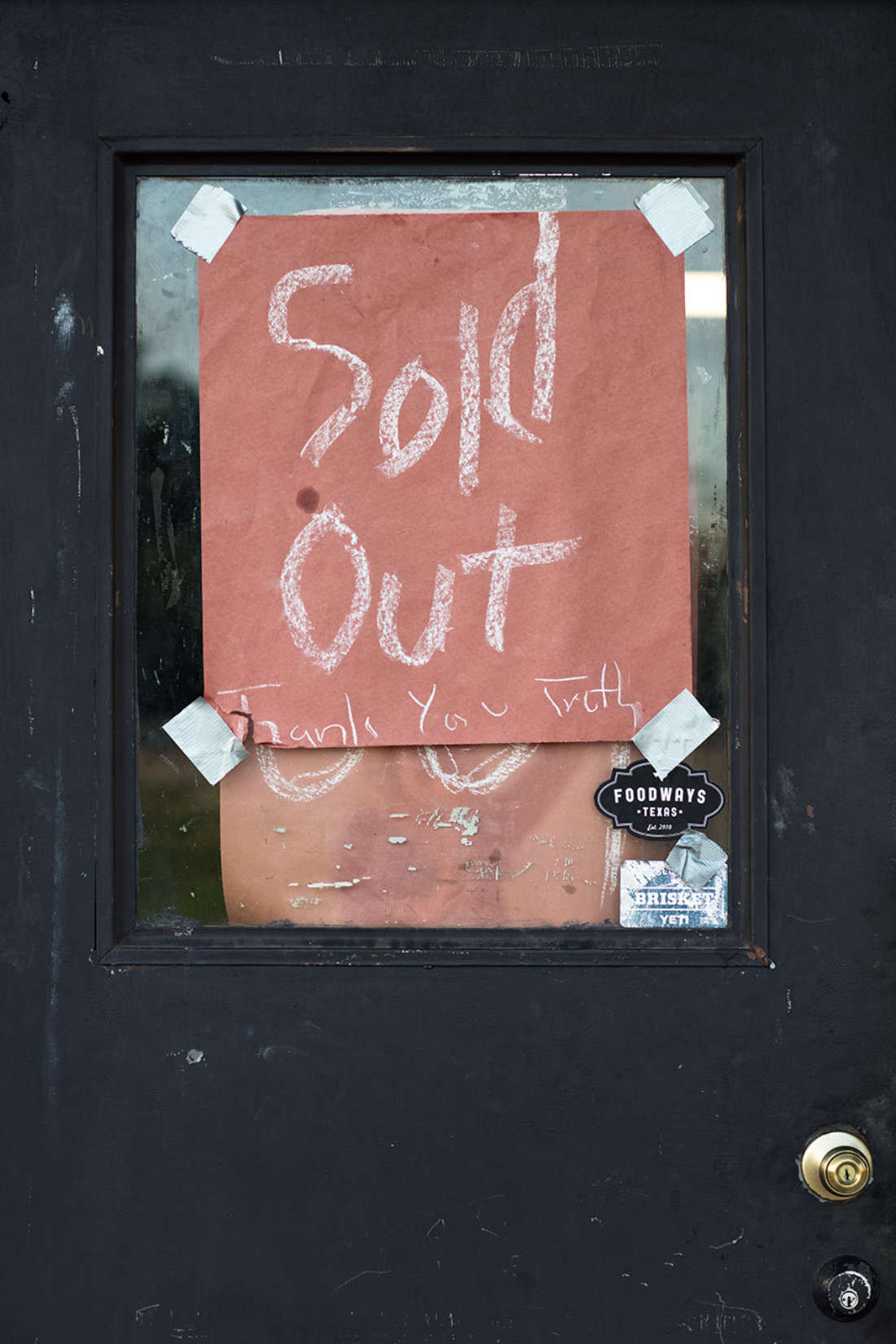