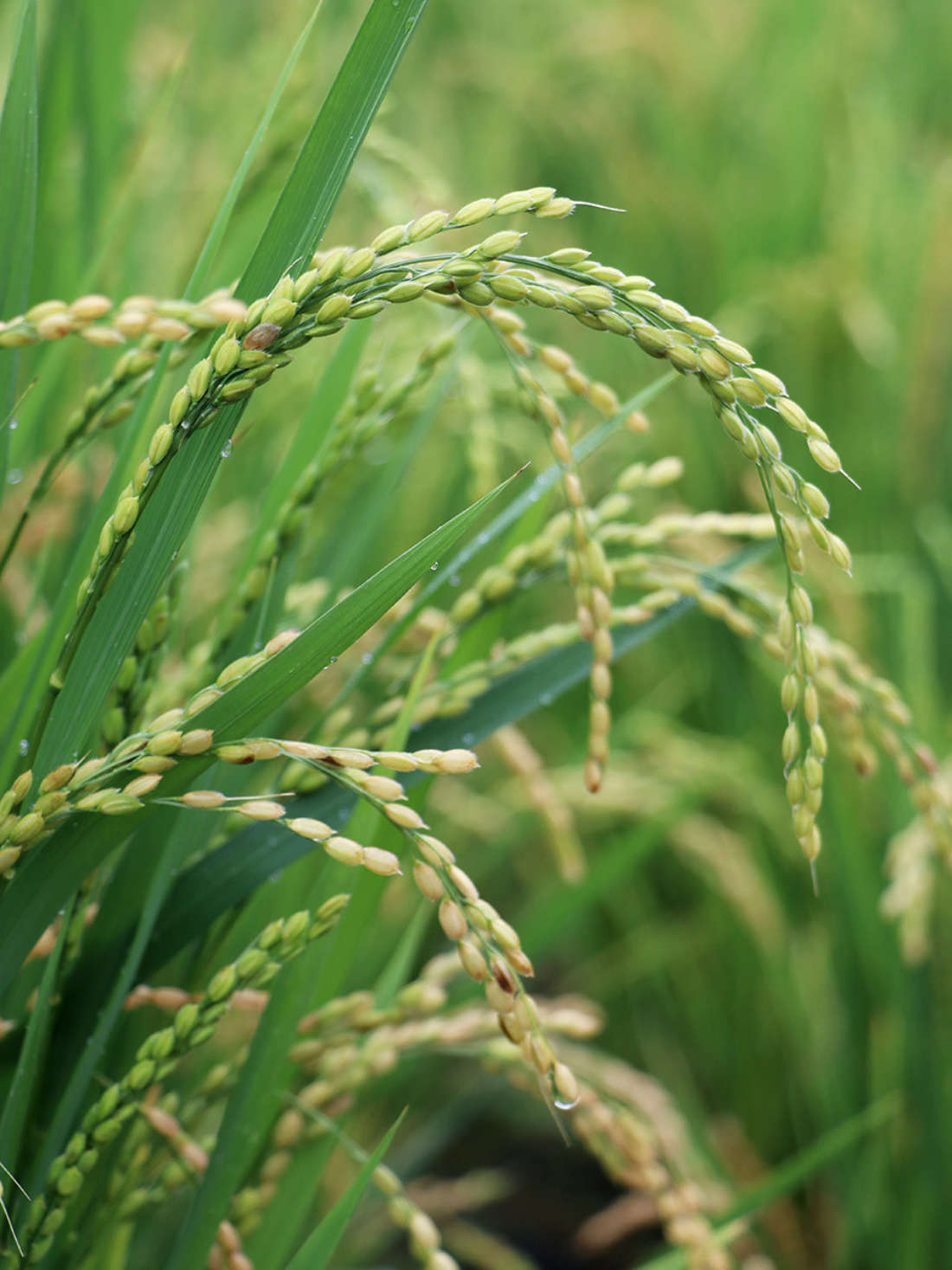 Prof. Sakurai and his Kaiwaka rice

We were welcomed with overwhelming stillness. The house was perfect; thatched roof, mud walls, aged wind turbines turning lethargically in the garden. We knew we were in the right place when we saw the front door, a triple glazed shoji. With the Japanese sensibility radiating from everything, I felt like I’d been spirited away.

It was a search for rice and their husks for my new ceramics project that led me to Professor Yoshimasa Sakurai’s lifestyle block in Kaiwaka. It was late February, overcast and drizzling, the day we chose to visit. The air was humid and the land profuse with fruit-laden trees, edamame crops and rice. 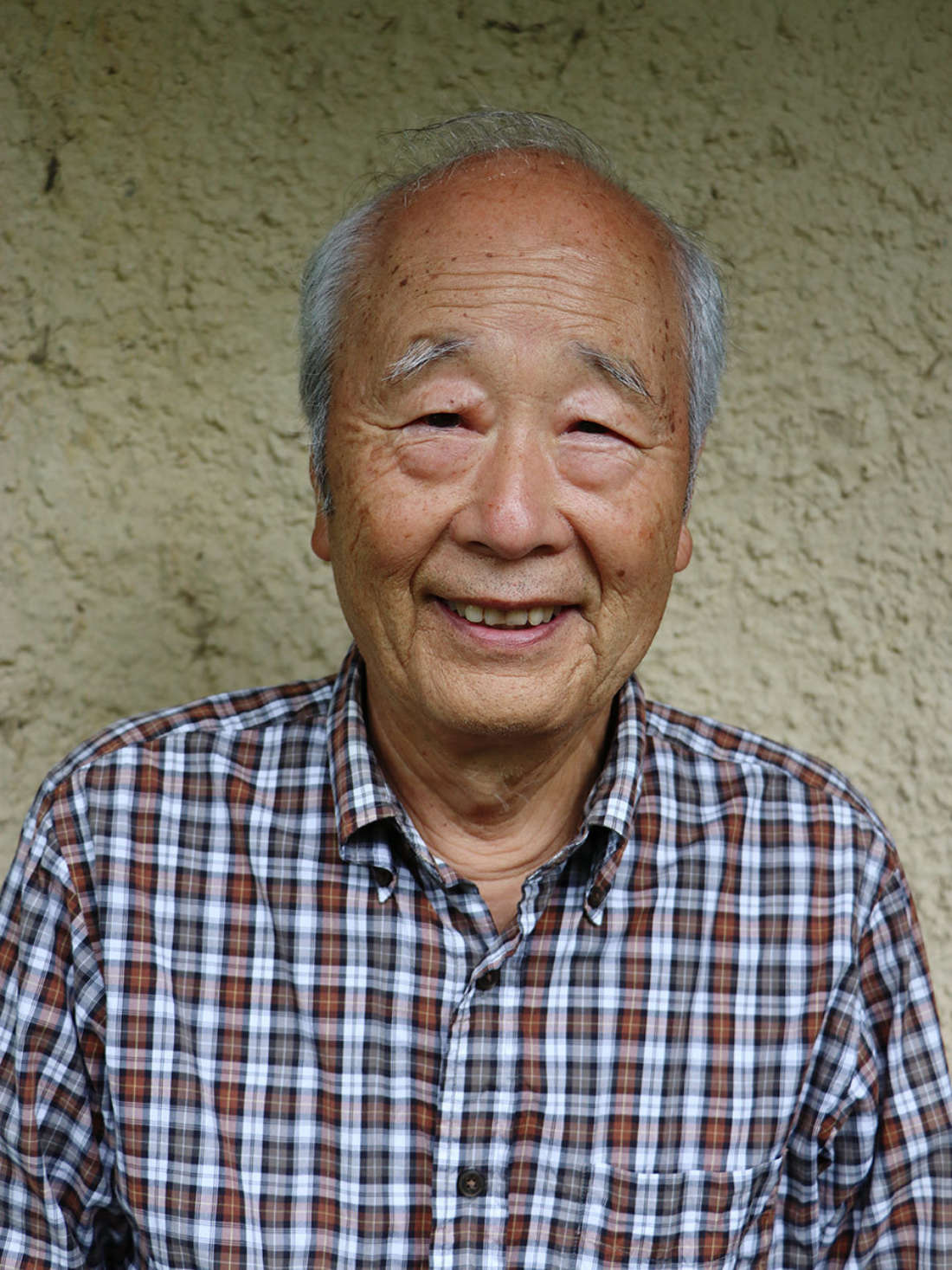 We knocked and waited for a little too long. I thought maybe Yoshi wasn’t home but we heard some movement. A small elderly man drew back the curtains. He didn’t look 80. Yoshi reminded me of my grandpa, peaceful and gentle. You could tell when he spoke, every word was considered.

Coming inside, the floor of the living room is made up of individual, hand woven tatami mats. It is softly lit and quiet. Holes in the corners of the room circulate air from the roof to the basement in a constant cycle. A solar cooker is stored outside and used to bake bread on sunny days, and inside there is a little gas stove powered by methane captured from his septic tank. Brilliant. I asked for a demo, anticipating the flame to look like a blow torch. Instead it was like a tea-light candle – that was cute. I guess living alone you don’t generate much methane!

Yoshi had originally planned to build this eco house in Japan but academic and personal reasons brought him to New Zealand. Thirty students came with him to aid with its construction. As a professor of Architectural Acoustics Yoshi had led projects on noise pollution in Osaka and on our tour of the grounds he sang us a German song in his outdoor amphitheatre. 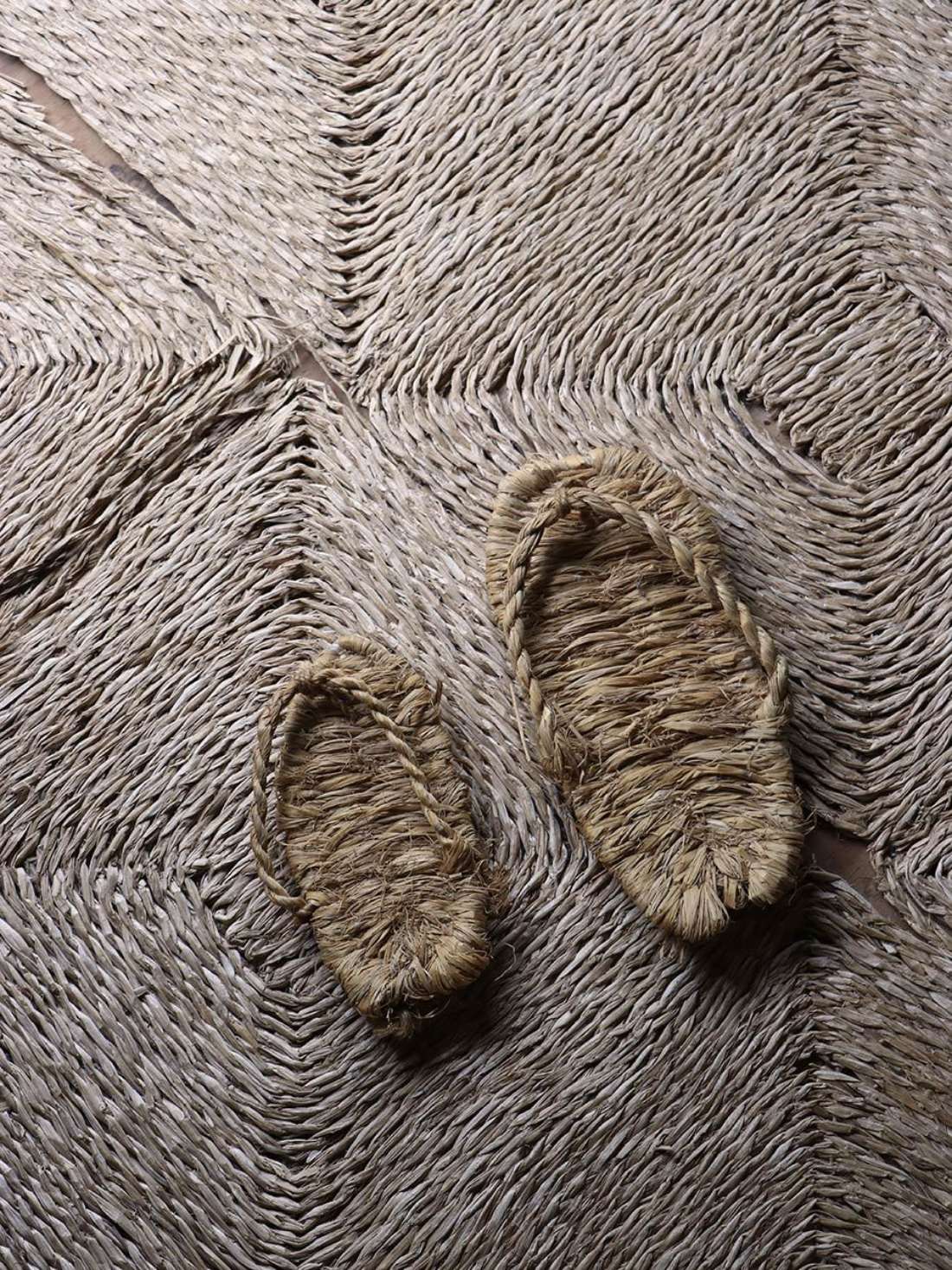 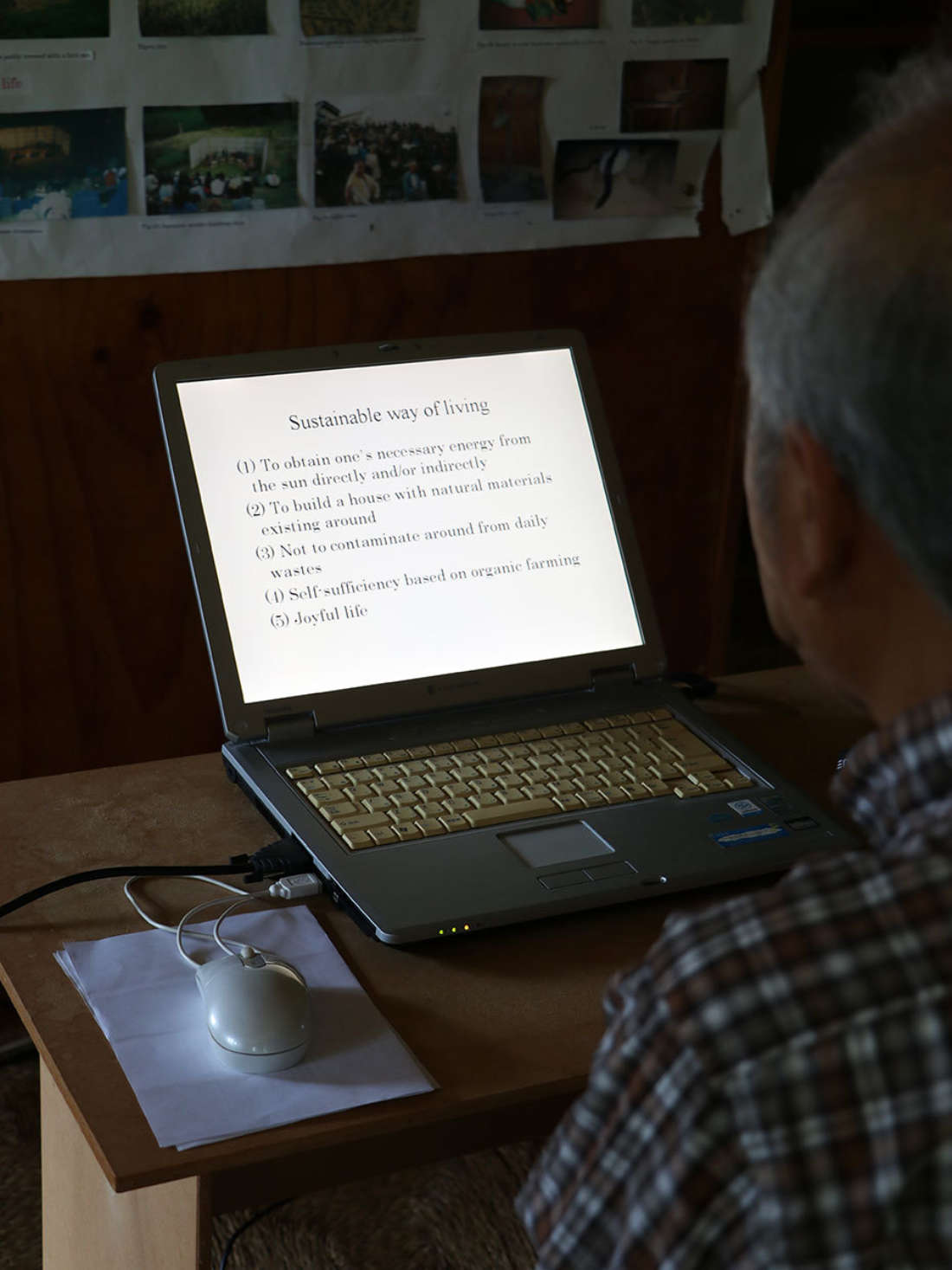 Yoshi is the only person I could find growing rice in New Zealand. A ten year old video I found online led me to his website, (http://www.ecohouse.co.nz/) a blog of systematic documentation on all aspects of the project. Over the course of 30 years he has faithfully recorded his work, documenting and analysing the successes and failures of his Experimental House. Even more inspiring is his personal philosophy around sustainability, quality of life and its symbiotic relationship to happiness.

The amount of land that Yoshi is maintaining by himself is crazy, especially given his age. Of course, the paddy field was what I’d come to see, it was smaller than I’d expected – no larger than a tennis court – but it was stunning. Yoshi uses organic principles to grow everything on his land. The paddy field was so healthy and the rice grains looked like fat little berries; it was a furry sea of vibrant green.

Most people assume rice won’t grow in New Zealand, Yoshi is testament that it can. Being a staple in the Japanese diet it was inevitable he would attempt to grow rice due to his goal of total self-sufficiency. The first rice seeds were planted in Kaiwaka soil in the late 90’s, but it was four years of inquiry before a successful harvest of 43kg was achieved. His record yield to date is an incredible 80kg. Yuki Hikari is the variety of rice, a japonica (short grain) from Hokkaido. Yoshi’s research, and the unsuccessful trials of other varieties, confirms that this rice is best suited to Kaiwaka’s climate.

Yoshi gave us some steamed rice to taste. Cooked, it smelt like a nourishing combination of toasted straw and coco pops, it tasted nutty and sweet. One of the secrets of having such flavourful rice is husking it as close as possible to when you want to eat it. This is certainly the freshest I’ve ever had. Yoshi husks his everyday which is probably a huge factor in how well he’s aged. Before we left, he generously gifted me a bag of rice. It felt wrong taking from such a holistic food supply! However, in his 22 years of growing rice Yoshi has yet to go without.

The rice grains, their husks and a village of weevils came back with me to Auckland. Turning the husks into ash using a bbq and indirect fire, masses of weevils tried to escape their toasty death. When converted into ash, rice husks become high in silica which is a common glass element for ceramic glazes. This was the ultimate payoff of my visit. I was making hand-formed bowls for an exhibition at Corban Estate, using Chinese stoneware. Each bowl is unique and designed to fit comfortably in one hand. After being fired the glaze took on a subtle pink blush, an unexpected delight. During the opening night of the exhibition I cooked Yoshi’s rice for visitors to eat out of the bowls I’d made.

The incorporation of rice husks in the glaze was a technical experiment intended to use a waste product and also to draw a holistic connection back to Yoshi and his sustainable philosophy. Both the ceramics and the act of eating embodied a narrative of labour and the sensibility of joy. Passing through the hands of the grower, maker and receiver it’s a reminder that art is for the body, not merely the eyes and intellect. 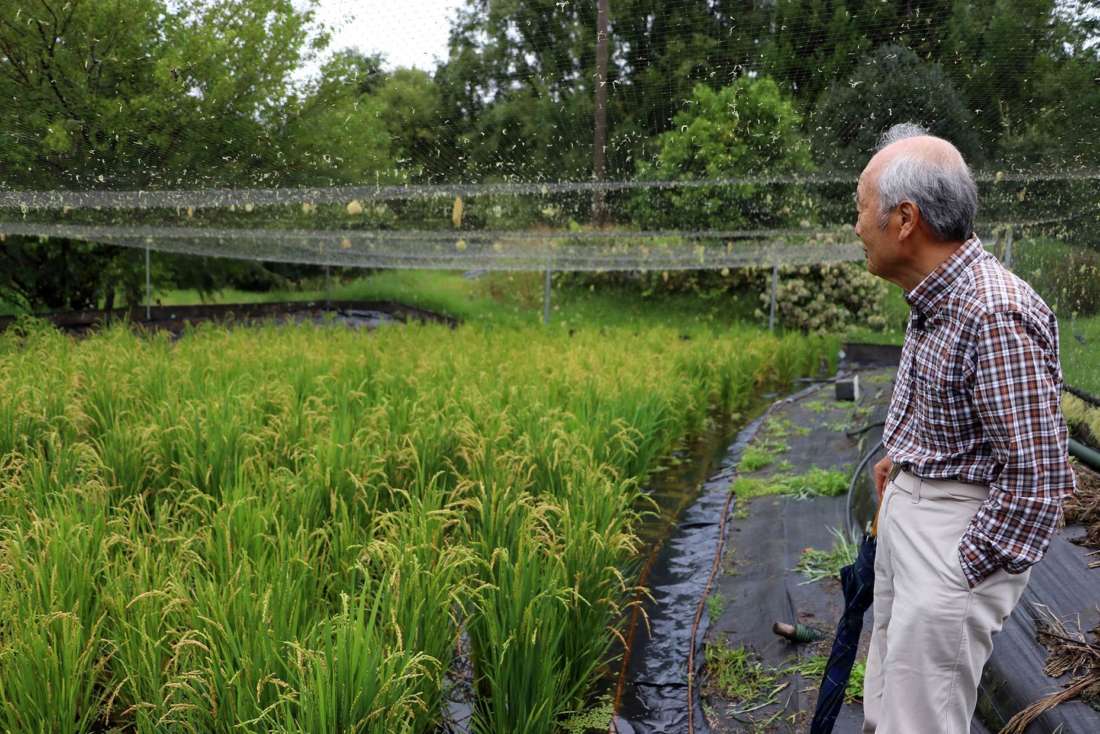