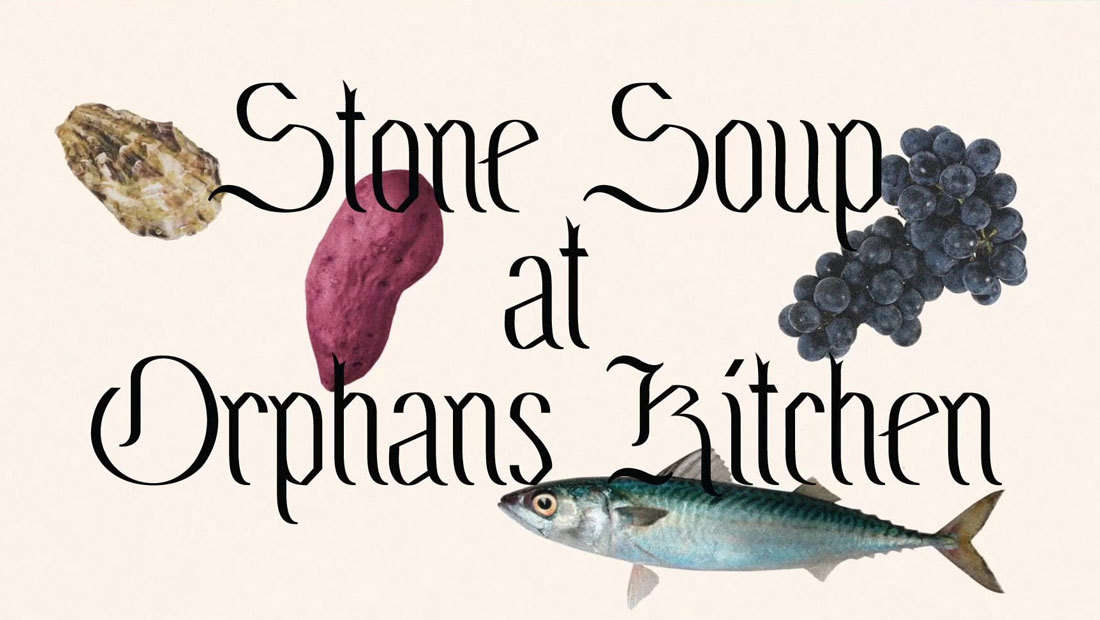 Stone Soup recently held fundraising collaboration with Orphans Kitchen and a bunch of our Aotearoa food heros. We’d like to thank them all, and below, share with you a video of the night and a story of the meal — and the best of our local food system — through the producers who donated their bounty towards the night.

Mahurangi Oysters is a family operated farm in the Mahurangi Harbour just north of Auckland, where Andrew and Lisa Hay have been farming pacific oysters since 1991. They were drawn to oysters as an environmentally-friendly aquaculture option after Andrew spent time working on trout and scallop farms in the UK.

Mother nature provides their stock each February when they catch the spat, and they use two methods to grow their oysters; traditional stick farming and the more modern technique, a floating bags system with natural single seed, creating beautifully shaped shells for their creamy oysters.

Oysters are harvested each day during their season and hand selected to order. Andrew and Lisa put a lot of care into their produce and so encourage their customers to learn the simple art of shucking, so they can ship you live oysters in the shell. Fresh is best.

Awatoru Wild Food is a family run commercial fishing and wild food supply company based on the Kapiti Coast, who fish through the warmer months and distribute and promote the use of wild proteins and a variety of seaweeds.

Tonight we have served tahr, a wild goat introduced to New Zealand for hunting in 1904, which is now considered by the Department of Conservation to be a ‘noxious pest’. A lack of pressure due to almost no commercial demand, their difficulty to access, and being a smaller animal than red deer, means tahr numbers have skyrocketed. Awatoru Wild Food agree with DOC that tahr numbers need to be controlled, but not with the current conservation initiative, which is to “seek and destroy” tahr, leaving valuable nutritious protein to rot where it falls. “A true food crime” says Scott, “these animals are one of the leanest healthiest forms of meat on the planet and should be at the forefront of the Aotearoa food story.” With DOC in the process of culling tahr, many areas have been closed off to hunters, making it uneconomical to target commercially. There is however still some viability on privately owned properties.

Wild foods are a healthy source of protein from outside of the industrial system (which is rightly in the spotlight for its environmental footprint and ethical practices), if kiwi’s embraced eating tahr and other wild meat, demand would incentivise hunters to recover more of this resource, controlling populations introduced into our ecosystem and providing nutrient dense ethical protein to the kiwi table.

Nate Smith comes from a multi-generational line of fishermen in Bluff. Alarmed by the declining catch he witnessed as a commercial Blue Cod fisherman, Nate was inspired to start Gravity Fishing, which seeks to model a path to transparent, sustainable, artisanal inshore commercial fishing.

Gravity operates on a pull-push model of direct trade. Nate builds personal relationships with chefs around the country who he notifies when he heads to sea. Prior to leaving port, orders are placed, then Gravity uses hook and line to catch exactly the volume of fish that has been ordered, and exactly the species he is targeting at that moment. Nate catches different species depending on the time of year, only targeting a fish once it has spawned and regained condition.

Blue Cod come close to land to spawn in the shallower water around Foveaux Strait from May to July, which is when they are traditionally targeted with cod pots by commercial fishermen, because they are easily accessible in bulk. Nate maintains this is the reason the fishery is in such trouble. Instead he fishes for Blue Cod with hook and line from August through summer, leaving them alone again when it comes time to spawn.

The fish are killed using the ancient Japanese technique of Ikijimi, then cooled and transported in recyclable cardboard packaging as a whole fish, including heads, scales and guts. This prolongs the shelf life of the fish and challenges chefs to utilise the entire animal, including heads, frames and offal. Better utilisation of fewer fish and premium quality produce from our waters staying in the country for our chefs and diners.

Nate works to empower other fishermen around him to follow his lead, but the privatisation of our waters through the Quota Management System means that quota ownership is in a process of continual concentration into fewer and fewer hands. Nate, and those with similar models, are constantly at risk of losing their livelihood to players with deeper pockets and more political influence.

Papatūānuku Kōkiri Marae is an urban marae in the heart of Māngere who have provided us with kūmara from their Hua Parakore māra. Hua Parakore is the world’s first indigenous verification system for mahinga kai (food and product production) driven by Te Waka Kai Ora (National Māori Organics Authority of Aotearoa).

Hema Wihongi and her mother Dell Wihongi—members of the marae—were part of Pu Hao Rangi Trust (guardians of the early kūmara) and the WAI 262* movement, who went to retrieve lost varieties of Māori kūmara from collections in Japan, some of which we are eating tonight. Lionel Hotene is the garden manager at Papatūānuku Kōkiri Marae, where he grows thousands of kūmara a year, most of which is gifted (along with more than 40 tonne of fish frames distributed through the marae by the Kai Ika project) to the vulnerable and food insecure community that surrounds them.

*WAI 262 was a claim which was lodged with the Waitangi Tribunal to protect and preserve indigenous flora and fauna and embed cultural and intellectual heritage in their management.

Kelmarna Gardens is a 4.5 acre organic community garden and city farm in Ponsonby, maintained by a few staff and a large number of volunteers.

Kelmarna has promoted organic gardening since it was established in 1981. This excludes the use of chemical sprays and artificial fertilisers, relying instead on compost, healthy soil, good plant care and natural pest management.

By providing diverse opportunities for direct participation in the local food system, Kelmarna is a physical invitation for urban Aucklanders to connect - with our land, our food, and each other. Kelmarna believes that we can't have sustainable agriculture without sustainable communities, and a connection between the two.

OMG - Organic Market Garden, is an urban farm on Symonds Street that has been co-created by the For the Love of Bees (FTLOB) community and is managed by Levi Brinsdon-Hall. In addition to being a market garden selling to restaurants and local residents, OMG functions as an open classroom and data collection centre. It demonstrates that by creating biodiversity havens and growing food regeneratively, we can capture carbon in soil - helping mitigate climate change, whilst producing nutrient dense food which ensures local food security. In the first 6 months of 2019 over 10 tonnes of carbon was sequestered on the site using photosynthesis and composting. In less than a year enough food was sold to support the living wage of a local farmer. OMG also closes local waste loops as a local living compost hub (in collaboration with New Zealand Box), making compost with food waste from restaurants and local residents, with which it fertilises its crops.

FTLOB has now created the Urban Farmers Alliance to help foster the roll out of more regenerative urban farms across Aotearoa.

Pakaraka Permaculture is the off-grid organic market garden of Yotam and Niva Kay, in the Kauaeranga Valley near Thames, specialising in fresh seasonal vegetables, salads and microgreens.

Pakaraka has grown over 8,500 kg of food a season using no-till methods, on a 1/4 acre of land, since 2014. Using Permaculture design and regenerative soil practices, Pakaraka aspires to grow nutrient dense food, by implementing a sustainable soil fertility program and using no-till cultivation methods. They are increasing the life in the soil, building organic matter and mineralizing the soil with natural macro and micro nutrients. Yotam and Niva are very passionate about growing real food for their community, and believe the future of food is small-scale, diverse and local.

Wine Diamonds are wine importers and distributors focused on organic and biodynamic wines from around the world, who have helped give New Zealand access to some of the more interesting wines you will find on restaurant wine lists and in select wine stores. You can purchase their selection online at everydaywine.co.nz.

Breakfast: The land of milk and honey goodie bag.

Once upon a time New Zealand had small flour mills processing locally grown grains in many of our communities. Despite the South Island being very well suited to arable farming, we now import 83% of our milling grain, closer to 100% in the North Island. Farms like Milmore Downs in North Canterbury are a model for growing exceptional-quality, nutritionally-dense grains in a local biodynamic system, but wheat is a global industrial commodity which can be hard for local producers to compete with. Luckily a few notable exceptions like Daily Bread have emerged, who are dedicated to using 100% New Zealand grains, supporting our local growers and mills. Daily Bread have baked you a 100% local rye sourdough. Rye can be a beneficial rotation crop, growing between crops of corn or over winter before spring oats or barley. Eating local grains can help establish a market for low carbon water efficient staple crops which are not only beneficial to regenerative farming practices, but also ensure a local food system which is food secure as we adapt to climate breakdown.

In a country founded to produce dairy, with an economy still wedded to it, and waterways being sacrificed for it, a good stick of butter can be almost impossible to come by in New Zealand. Luckily Amber Rose has kindly made you a stick of cultured kefir butter. It is a 48 hour ferment with organic cream from Green Valley Farm in north Waikato, lightly seasoned with flaky New Zealand sea salt. An example of how delicious, nutritious and responsibly produced our dairy can be.

For The Love Of Bees is a social sculpture the city is making together. Using the loveable bee to determine if our ecosystem is safe, they take a bees eye view on our green spaces to help us see the innate interconnectedness between pollinator, soil, plant and human health. Tuning into these life supporting connections, we can celebrate the wisdom of regenerative biology-first methodologies and community action to create climate-change-ready infrastructure, enabling carbon sequestration, biodiversity and optimism.

The honey in your goodie bag is the product of FTLOB Pasture Paintings. A no dig, geometric planting system that develops soil biology that can sequester carbon and quickly contributes to the billion flowers that each honey bee colony needs each season to survive.

You can find a guide to creating your own pasture painting at www.fortheloveofbees.co.nz/pas...