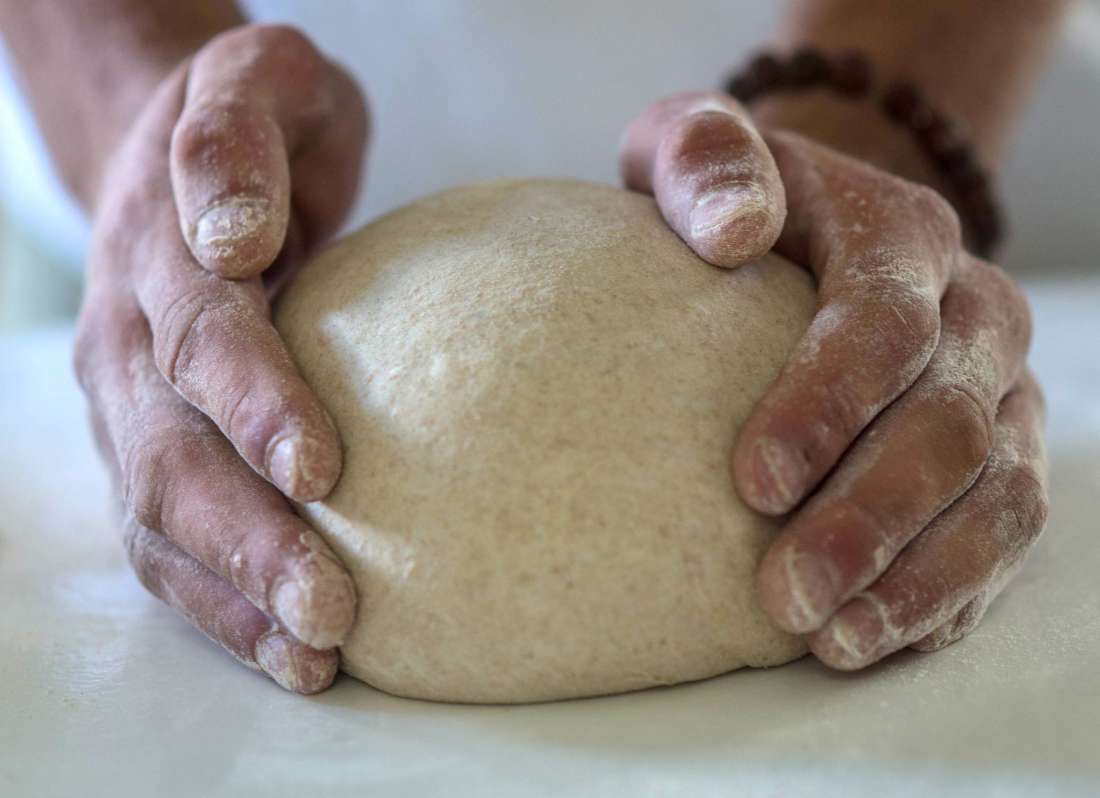 Jerome Ozich cares; about health, the community, country and planet he inhabits, about the people lucky enough to have access to the few loaves he produces, and especially about taking time to bake bread with care. Sourdough bread made from local organic stone ground wheat. I had a chat to Jerome, which appears very lightly edited below.

“living within my means – and trying not to consume too much, that’s where I’m at.” 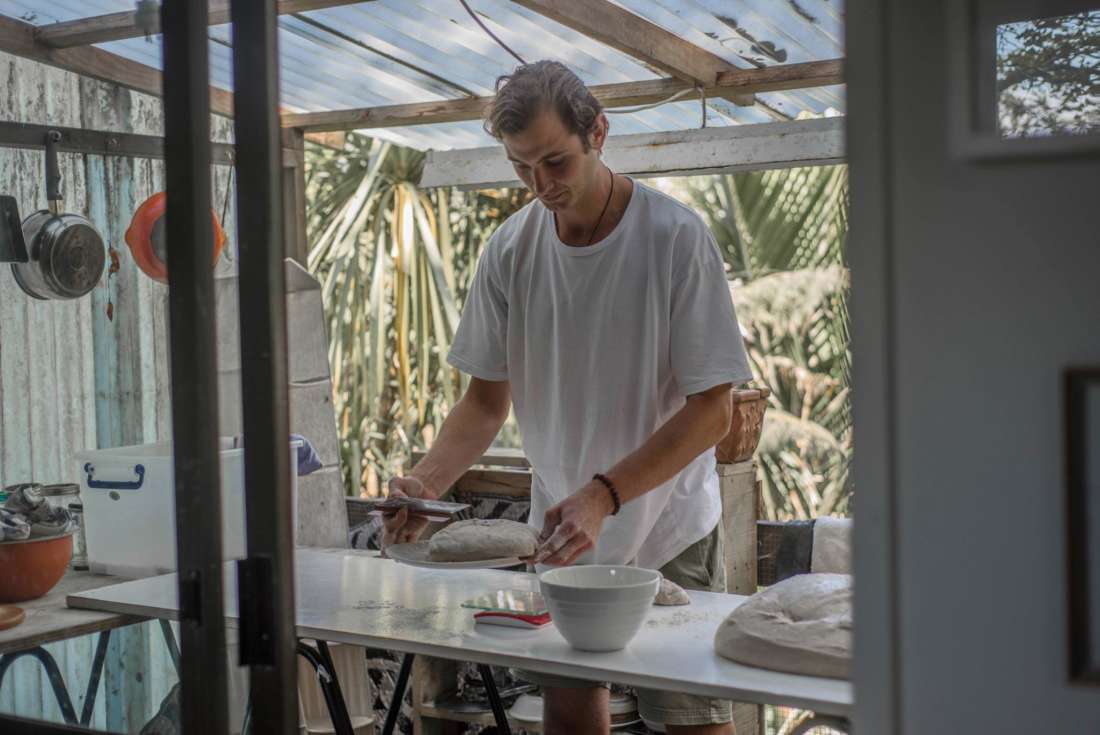 What inspired you to start baking sourdough?

Tasting the bread…sourdough bread. I went through that whole gluten free stage, being scared. I really thought gluten and bread were bad. I went travelling – not eating any bread – and when I got back to Auckland I was in Glen Eden and saw a new bakery had popped up. I went in, they did organic sourdough, I tried it and wanted to learn about it. Then one day I just went in and asked for a job.

So going in as a skeptic, having a taste, and it tasted so good that you actually wanted to learn to make it?

Totally, it was feel good food, it didn’t have that low energy feeling, you could taste the care that was put into it. I was going for the organic wholemeal loaf and was just surprised…“How does he do this?”. That’s when it all started.

And you were specifically interested in the organic bread?

Yeah, both of my parents have had cancer and a curiosity about health and food and exercise developed while I was travelling and had time to research. I volunteered on organic farms overseas, and the care these farmers were taking with their organic produce, it’s something we can change. No chemicals – just care – in our produce.

Were you WWOOFing? (Willing workers on Organic Farms)

Yes, WWOOFing. One place supplied community vege boxes, another was a Hare Krishna community who grew their own organic veggies, and the other was a croft. They would invite people to stay on their land in Scotland and were pretty much self-sustainable. She was very interested in biodynamics and planting with the moon and grew giant vegetables with so much care. Their passion, as a couple, definitely gave me a passion to continue to pursue organics.

Is there an environmental aspect to your interest in organics?

Totally. It’s hard to see what’s happening in the world. I was reading about the Great Barrier Reef, it’s basically wiped out. My jaw literally dropped hearing that. That’s heavy. And that’s just one thing, climate change, that we as humans are doing to this planet, and the planet’s starting to go, “what the fuck?!”. So if I can keep a focus on organics and on sustainable living – living within my means – and trying not to consume too much, that’s where I’m at.

And is that something that’s common in your peer group?

It varies. I’ve got friends that love to shop online and I’ve got friends that love to live in the bush, like all friend groups. I was on Queen Street the other day and it was just, “SALE! SALE! 50% OFF SALE!” everywhere, and I was just like, fuck, we really need to wake up, FAST. We’ve got a mentality that our parents will do it for us, “I’m not responsible”. That I am responsible for what’s happening out there is a big thing I’m going through and that’s what this whole bread and organics thing is. Where am I spending my money? And if I can share that with people and they start asking questions it might create little changes. But we need big changes, real fast. We’re on the brink. That’s what I’ve been feeling. We have our friend the Internet who can get to a mass in an instant, that’s one good thing my generation has up our sleeve.

You weren’t baking bread before you travelled, what preceded travel and bread?

I have a degree in engineering. The whole life I was living was completely different to what I discovered travelling. I was playing premier rugby in Auckland, and working in the engineering field. After travelling, needing to play competitive sport, or to do long hours in an office as an engineer…I was like, nah!

I always enjoyed food. Growing up in a Croatian family food was everything. I’d watch my Baba (Grandma) make pancakes, that was the first thing that I could make for the whole family on Sunday, a stack of really thin crepe-like pancakes, my little mission. So food was there and I’d just pushed it to the side. Until I went travelling. 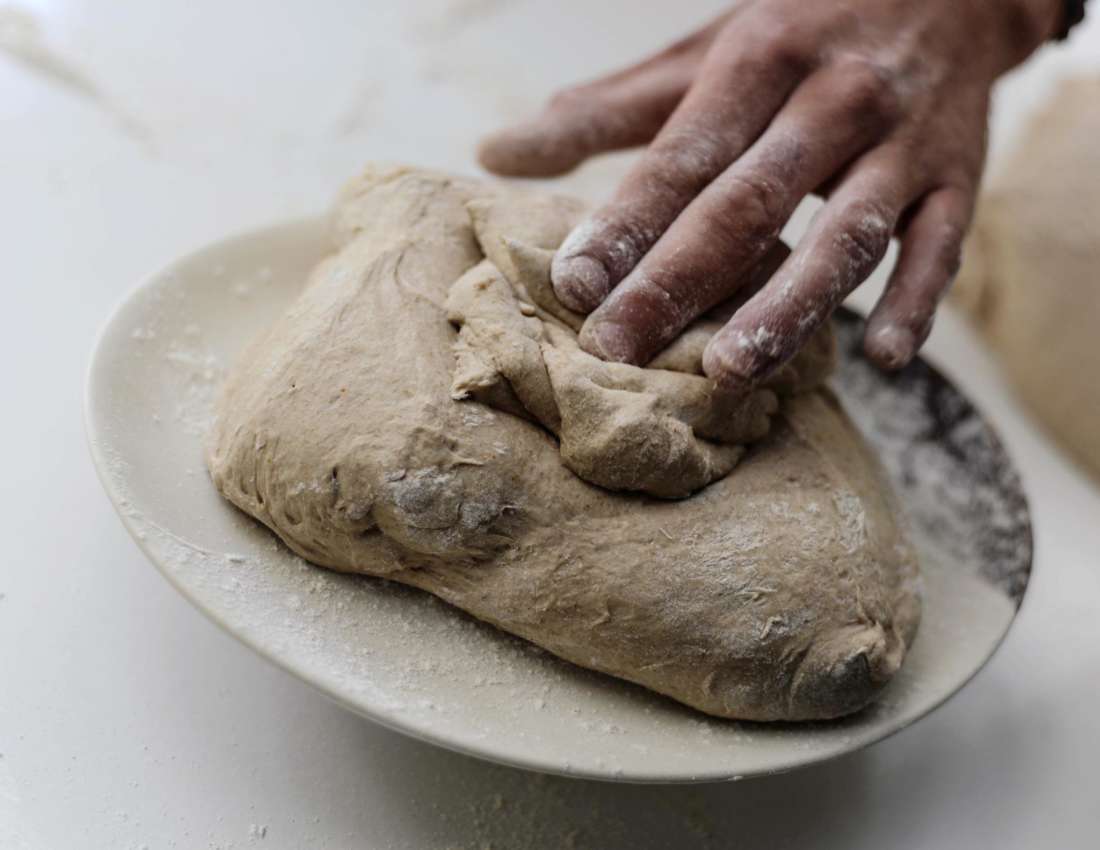 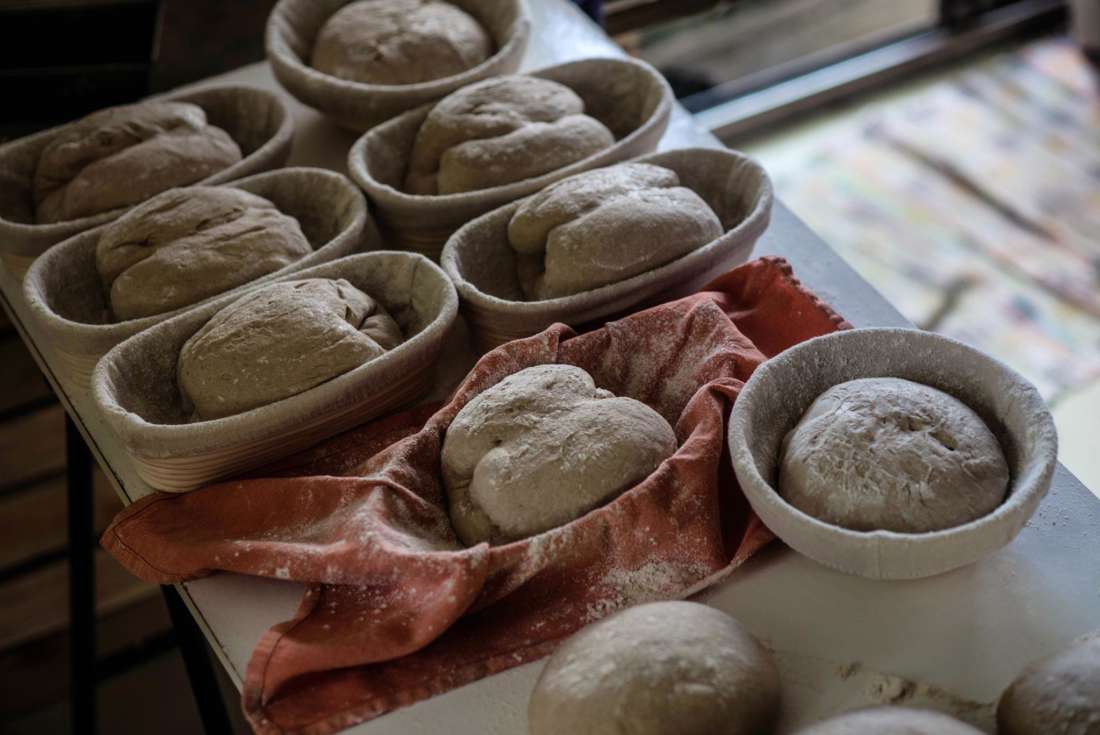 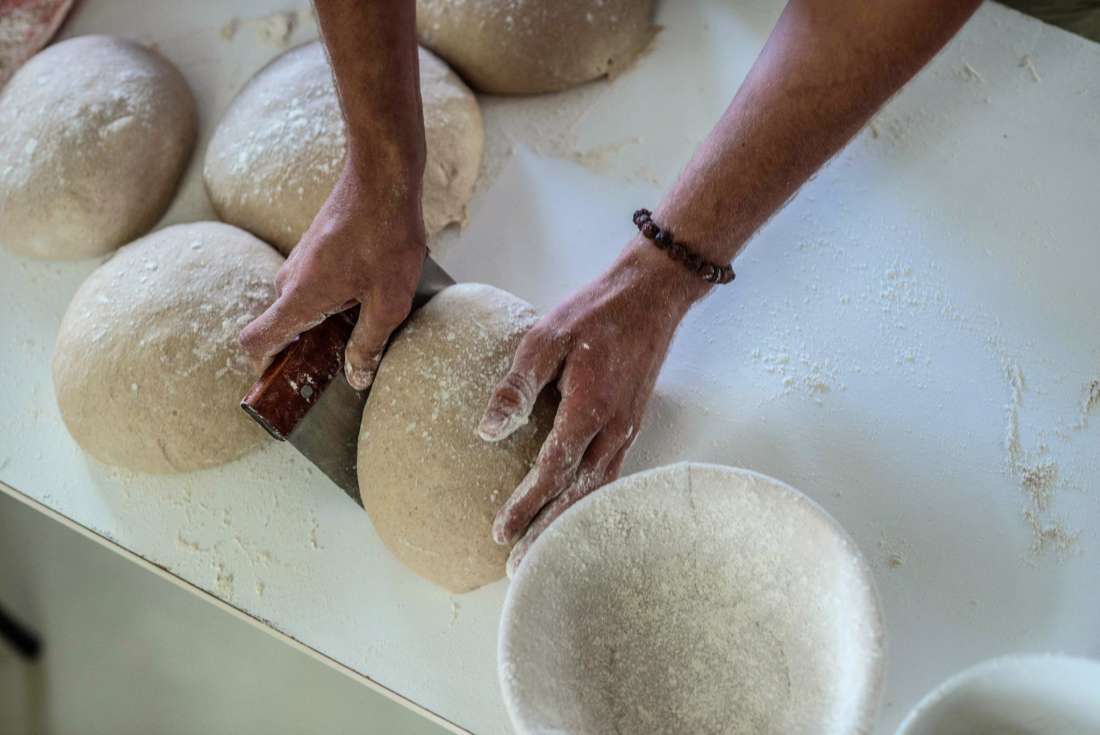 You did a lot of thinking and learning during your travels, came home, ate some bread, decided that maybe that was a path more in tune with where you were at than going back to engineering?

Yes, and bread has a scientific side to it, lots of calculations. You can play with percentages and try different things, that appealed to me. It’s quite a simple process; flour, salt and water, but I was able to have a play with it, scaling it up, combining recipes.

And at the moment you’re baking it in a home oven.

Yeah, a little double Dutch oven in a home oven, Chad Robertson’s Tartine book suggested it as a good way and it’s been making awesome loaves for me.

So that means that you’ve got to bake one loaf at a time? How many loaves in a session?

One loaf at a time! The most I’ve baked is eight, that’s about enough for me. I spend all morning into the afternoon baking one at a time.

And then you go out and deliver them to people? So you’re a bread dealer.

And so how do people end up stumbling across you? Are you out there looking for people to sell bread to or are people finding you?

I really don’t have the capacity to say, “Hey, I can make loaves, who’s keen?”, so people find me and mostly approach me through Instagram or word of mouth. That’s how I’ve been able to get started without having to project.

And is that a point that you want to get to, having the capacity to project and increase production?

Yep, whether it’s a Saturday and Sunday thing, or maybe throughout the week. A few months ago I was going through a whole process of, “What am I doing with my life?”, the question was quite prominent in my mind and then I just stepped back and allowed things to happen. With the bread you can’t really rush, you can’t force it, and that’s what I’ve gone back to with my life. Yes, I need to make money, and if this hobby grows and I’m ready to grow I’ll do the same.

My wheat is grown in Canterbury and it’s all stoneground, it’s not as refined as flour from high speed milling processes. It’s a blend of three flours: stoneground white wheat, wholemeal wheat and rye. I’ve experimented with the loaf I’m making for the last year to get structure in the bread and I enjoy the wholemeal aspect because you’re consuming the whole grain which is much more nutritious.

Is it common for bakers to use New Zealand wheat?

I’ve heard that New Zealand wheat is not a strong bread flour, but it’s something that I just want to pursue as a challenge.

So even if you could potentially make a better loaf from imported wheat you’d rather use the local wheat, what’s your driver?

New Zealand! It just sounds a bit stupid to me, if I can support our local community and the people putting care into growing organic wheat, I want people to be eating that rather than going elsewhere.

And you learned to bake in this new Glen Eden bakery?

I learned from Lee at The Crafty Baker, he showed me his process, how he feeds his starter – that’s a big one – I was learning his method and then I got Chad Robertson’s book and started blending the two styles. And there are lots of videos on YouTube and there’s lots of Instagram help.

The Internet was one of your teachers?

Yep, people are happy to share. If somebody wants me to come over and make bread it’s just the same – hard out – I want to share. If people put the time into something simple like making bread instead of buying that $2 shit filled with emulsifiers and made as cheaply as possible there has to be wellbeing benefits, and a sense that you’ve achieved something. Michael Pollan in his Cooked documentary says, “Eat all the apple pies, eat all the cookies, eat all the ice cream, eat as much as you want, on the one condition, that you make it”. And that’s where we’re at right now, we can have everything, but we can’t make anything, and we’ve got health epidemics and this world is in a rough patch. We’ve got to do things for ourselves, but together. It’s hard to act on your own. When you’re busy with work and you’ve only got a few hours to spare and no time to make dinner, you go to the supermarket who charge crazy prices for vegetables, and next to nothing for junk. There are systems in place that make it hard for people to do it by themselves.

*Since I spoke to Jerome he has found an oven hook up, a friendly bakery willing to lend him a proper oven once they finish their bake for the day. So he’s got a few loaves up his sleeve. If you ask him nicely on Instagram @jjeromes you never know, you too might be lucky enough to have a bread dealer.