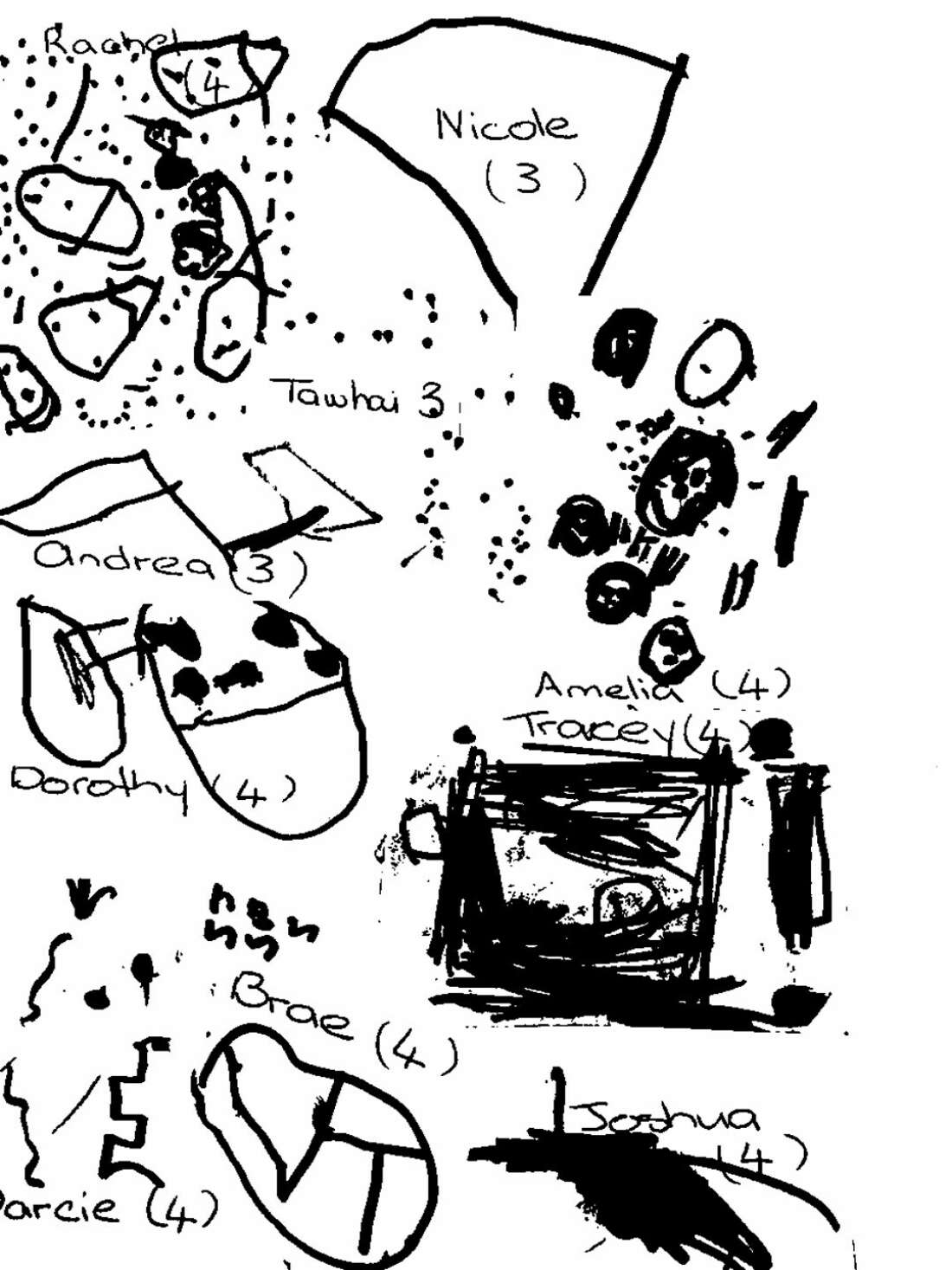 A return to community cookbooks

I have been thinking a lot lately about my physical encounter with recipes. Can words and pictures adequately express something that is otherwise so sensorial and emotive? Can a perfectly composed photograph of a dish in a glossy hardback generate the same excitement as one found on the smudged cover of a book that has been passed down through generations?

A bound assortment of recipes can be a record of exchanges between people and communities. In realising this, maybe we can begin to re-imagine a kind of cookbook that is not just about technique or spectacle, but is a reminder that people are at the heart of a good meal. 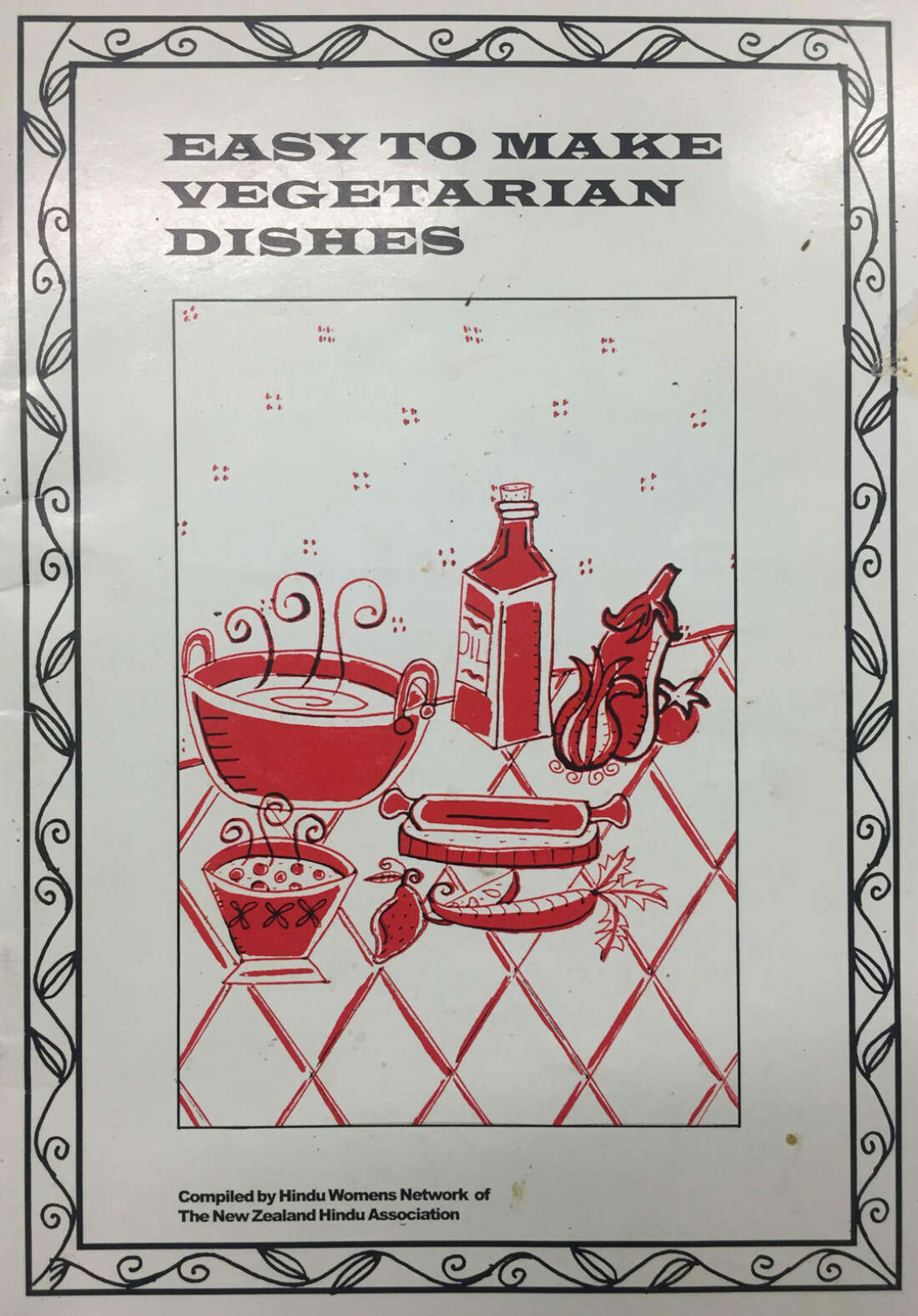 The Alexander Turnbull Library has a collection of about three hundred community cookbooks. They have been gathered from across Aotearoa, but mostly from small towns, and collated and printed in association with netball clubs, churches, cultural societies, music groups, and primary schools. During the 1970s and 1980s, it seemed that if you had formed a community around a common interest, an associated fundraising cookbook would follow.

These cookbooks present the types of recipes that were guaranteed on school camp or at a potluck dinner at the local hall. In every book that I leafed through, it was certain that the baked goods section would have recipes for lolly cake, biscuit fudge, carrot cake,and a quick eggless chocolate cake. The index for savoury dishes and sauces would include some slightly scary mince dishes, fish pie, and that mayonnaise dressing that is made with condensed milk. These books acted as a sort of kitchen handbook: a homely checklist of dishes that should have been in everyone’s culinary repertoire.

The predictability of the recipes is often enlivened by the multiple variations within a single cookbook. Undoubtedly, this repetition was inevitable as the books are compiled from individual submissions, not deliberately planned and ordered. The decision by the organising committees to keep two or three versions of the same recipe demonstrates a persistent encouragement of adaptation and improvisation. Community cookbooks recognise the value held in the specificity of family recipes. Even if a dessert is the best dessert in the whole world, if it doesn’t taste like a memory for you, it will always be inferior.

Including similar recipes in community cookbooks allows for new families and situations to be woven together, connected by a shared recipe. A type of truffle, called bumble bees, has three iterations in the blue spiral bound Rakaia School Community Cookbook. A page spread in the Waterloo School Cookbook from 1986 has two different pavlova recipes. The ingredients and quantities are essentially the same, although measured out in different units. Recipes like these for pavlova, saved for special occasions, require a certain kind of guardianship, because sharing knowledge creates a community in itself. I imagine these recipes as a thread connecting people through time and space, transmitted by generations of hands and careful guidance, by plates laid gently on a table, or servingware that is reserved especially for that meal.

Despite the cookbooks’ similarities, regional differences are clearly visible through the dominance of certain produce. Recipes Galore Moeraki begins with a flurry of recipes for lobster, the Eastern Southland Cookbook features trout and pāua, and, not surprisingly, in Bluff Kindergarten Recipe Book 1989, oysters appear as a commonplace inclusion. The normality of eating locally, or using what is in abundance, is also linked to activities that take place in the community. Residents of Gore are not purchasing trout from the supermarket, but have likely caught one fishing in the weekend. Gathering food often requires many hands, and many mouths to share the fruits of the labour.

The community cookbooks demonstrate a real commitment to local industry. Sponsorship from local businesses was the main way that printing costs were covered and as such, these cookbooks were able to be a feasible way of fundraising for the community, be it a school or a church. The synergy between actual people and businesses in the area suggests a community that was in touch with one another. It was prepared to invest in the future of the local economy, but also in the interests of those who work for or with them. The advertising material throughout a few of the cookbooks does not seem invasive, but represents the workplaces or businesses of people who have contributed to the book. Tiwai Dairy is included as a sponsor in the Bluff issue, a convenience store which takes its name from the aluminium smelter that, at the cookbook’s time of publication, was a huge source of employment for the area. 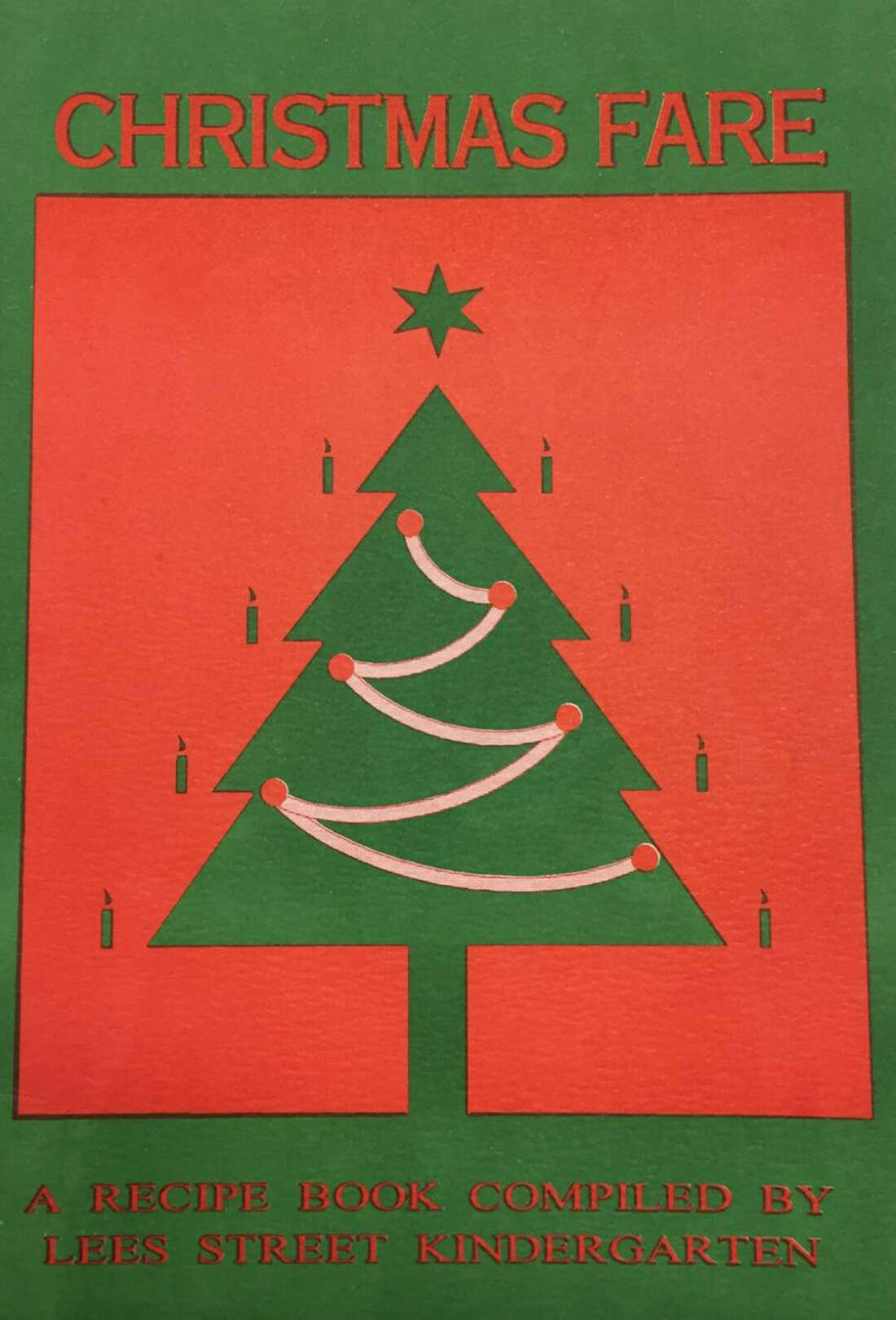 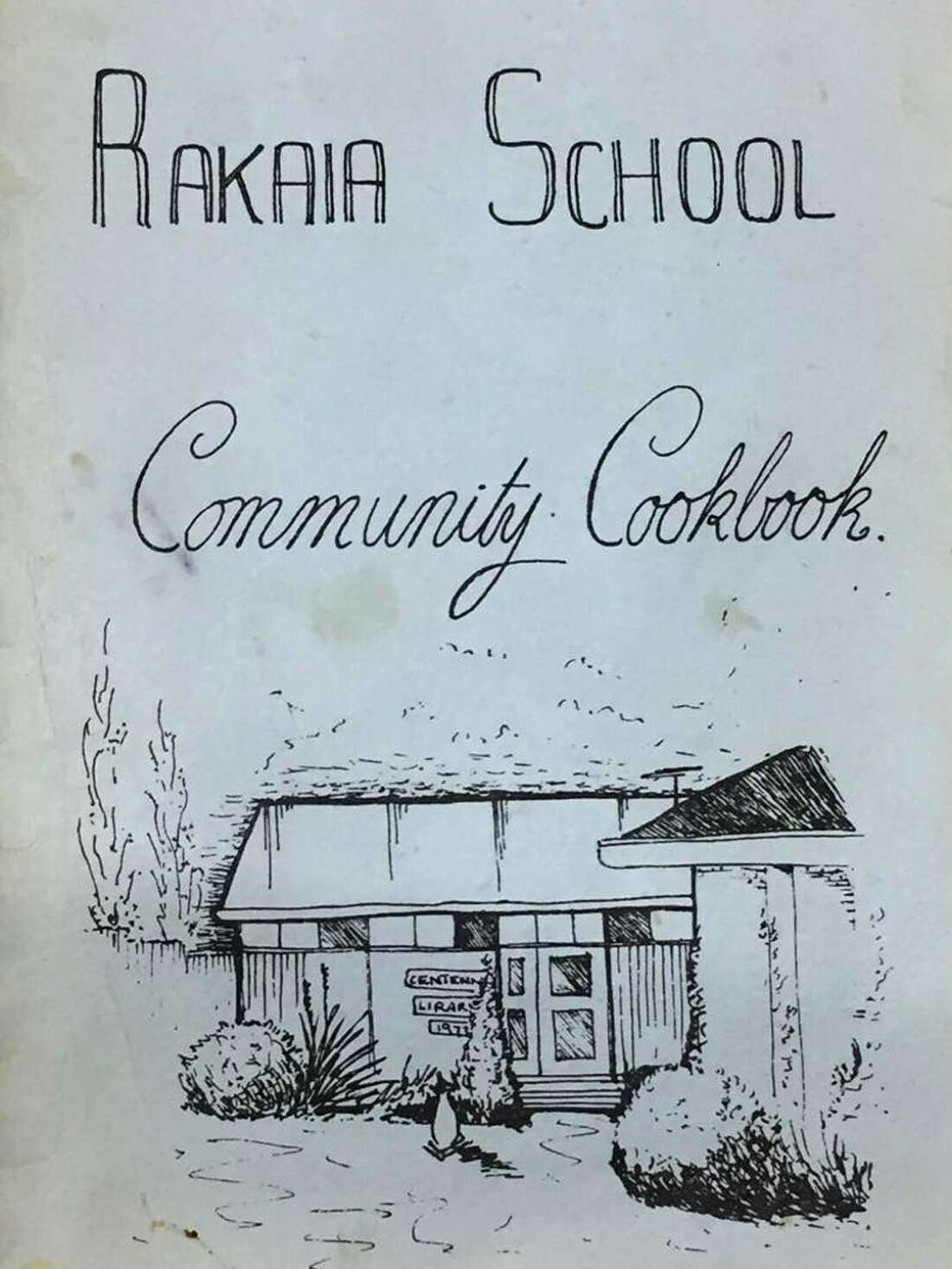 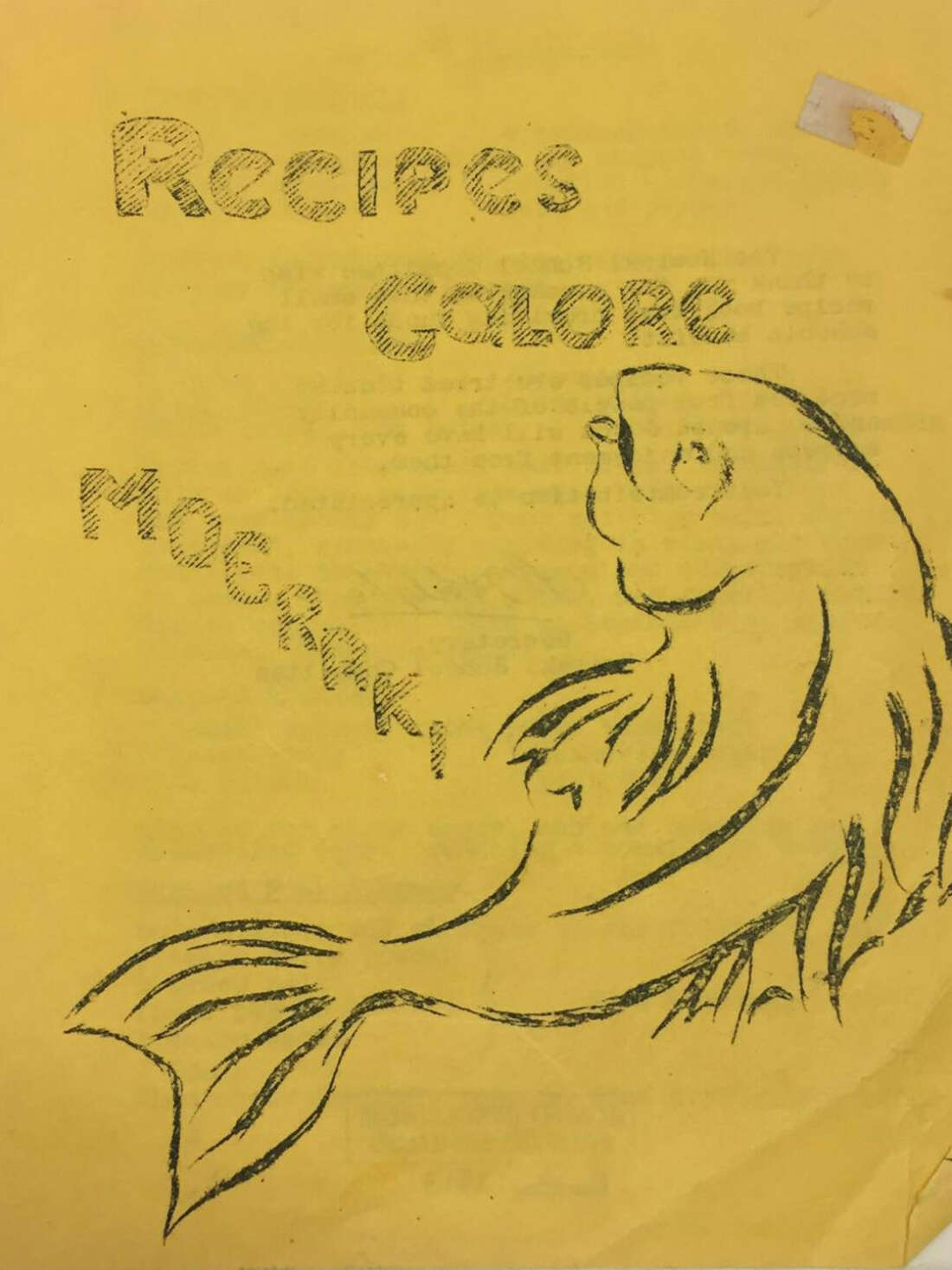 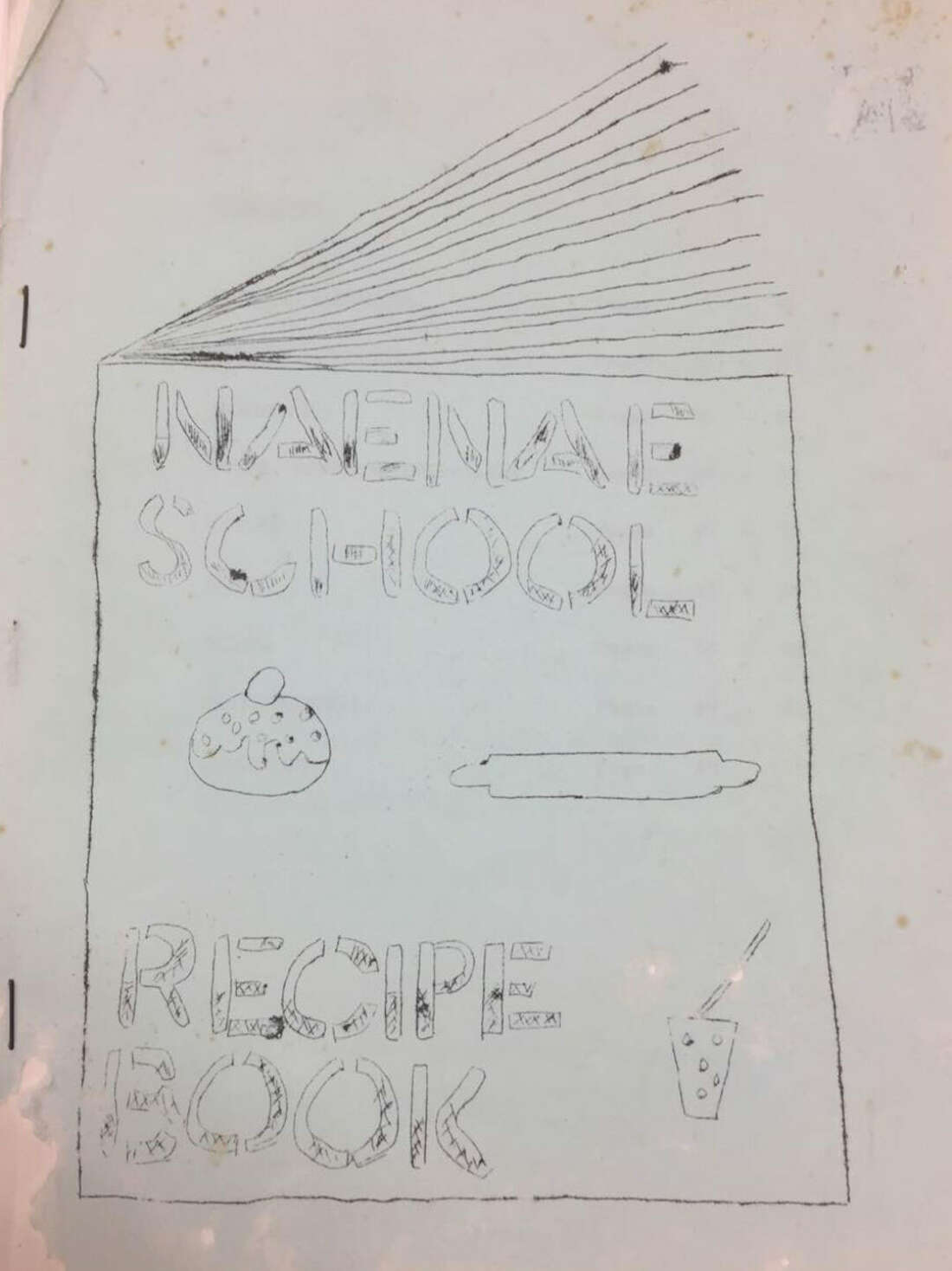 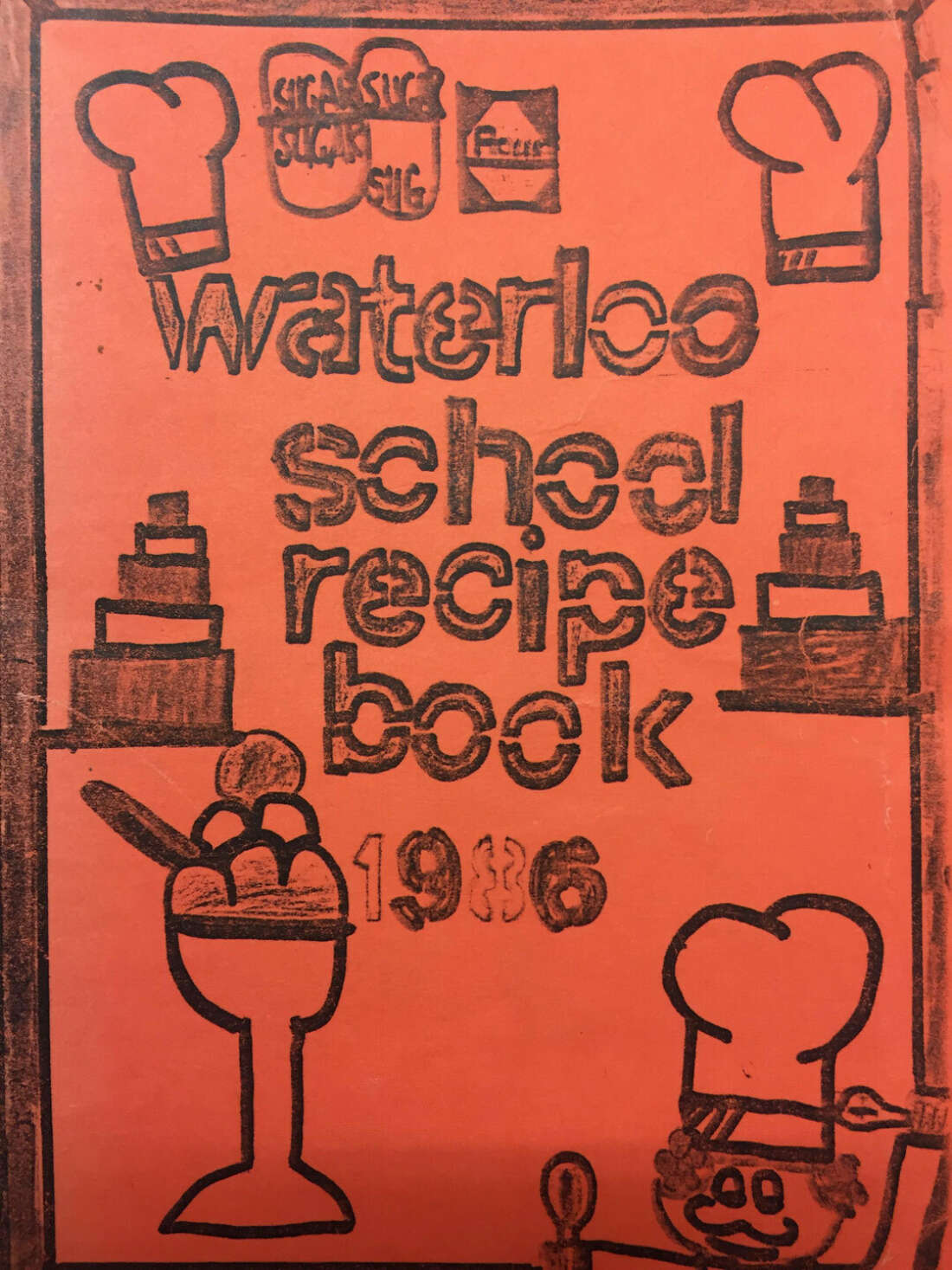 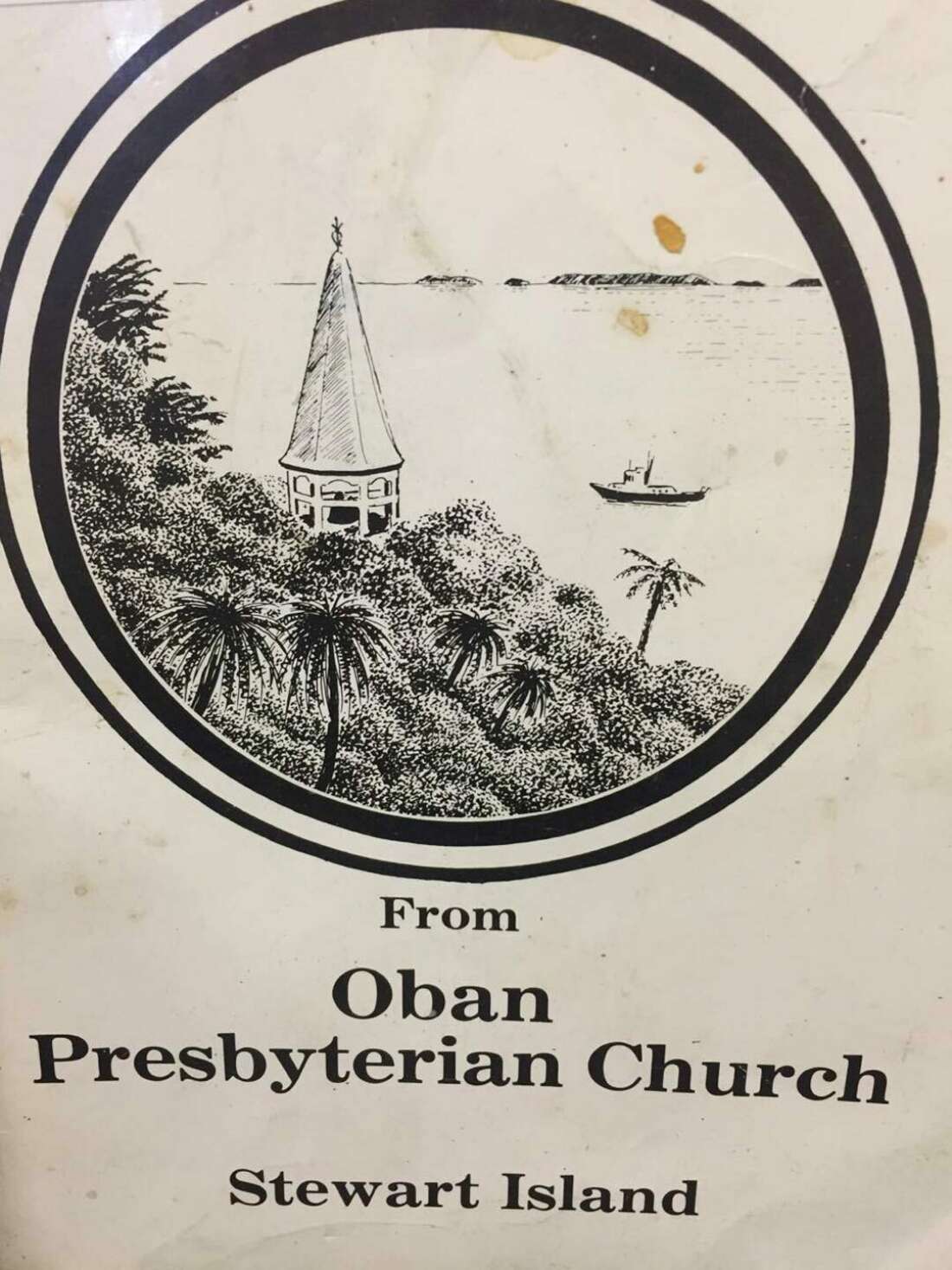 My favourite books are the ones that are not too polished, that have been made collaboratively within the community they are from. The tiny illustrations that pepper the pages of Waterloo School’s community cookbook are often idiosyncratic. I baked a cake that was illustrated with a bold drawing of a circular layered cake with a slice cut out of it. I began the recipe imagining that my own effort would somewhat resemble this child’s line drawing. As I followed each instruction, I realised the cake was not round, it was square, and it definitely fell into the slice category over any resemblance to a layer cake.

Another page with a recipe for “Quick Mince Dish” had a drawing of a spider crawling toward a fly trapped in a web and a speech bubble calling “help!” To the same book, Andrew Brooks from Room 1 contributed two different recipes for chocolate square, each accompanied with a checkerboard-looking drawing of the finished product. Including children in the making of a number of these books is a reminder of how fun and collaborative cooking could, and should, be.

Most dishes are intended to be able to be made without having to buy anything additional— a cake can be cobbled together from existing pantry staples. In an age where ingredient lists seem to call for increasingly fantastical goods— products that are impossible to buy in the average person’s local supermarket, particularly in small towns— the familiarity of every foodstuff listed in the cookbooks that I looked at was refreshing. Every recipe has its foundation in the basics: flour, sugar, Weet-Bix, condensed milk, a packet of malt biscuits, potatoes.

This focus on printing recipes that every family in the community would be able to make, points to a consideration of food as a household expense. There is a thriftiness at the heart of most of the recipes that are included in these books. In the Rakaia book, there is a recipe for “Economical Loaf,” omitting any butter to keep the cost down. Similarly, the Naenae School Recipe Book features “Budget Biscuits,” and in brackets, the recipe writer has noted that they taste “just like Afghans but a lot cheaper to make!”

Economy is a word that appears often throughout the dozens of community cookbooks that I looked at. It’s not about being stingy, but about being conscious of how cost prohibitive cooking for, or hosting a large group of people, can be. The idea of economy seems a distant one when we think about home cooking or baking now. When asked to bring something to a shared meal, there are a number of things that you think about that often result in an economical contribution — simplicity and seasonality, for example— but the need to impress often overshadows the community at the core of sharing food with loved ones.

There is a beautiful tendency in community cookbooks, where money is not presented as an obstacle to preparing and sharing food amongst family or at a potluck. A need for economy does not preclude anyone from joining in. Ultimately, a meal between family, friends and a wider community is rarely about the food itself but about creating a space where people can connect, hold conversations, and feel safe and welcomed around an activity that is common to us all. 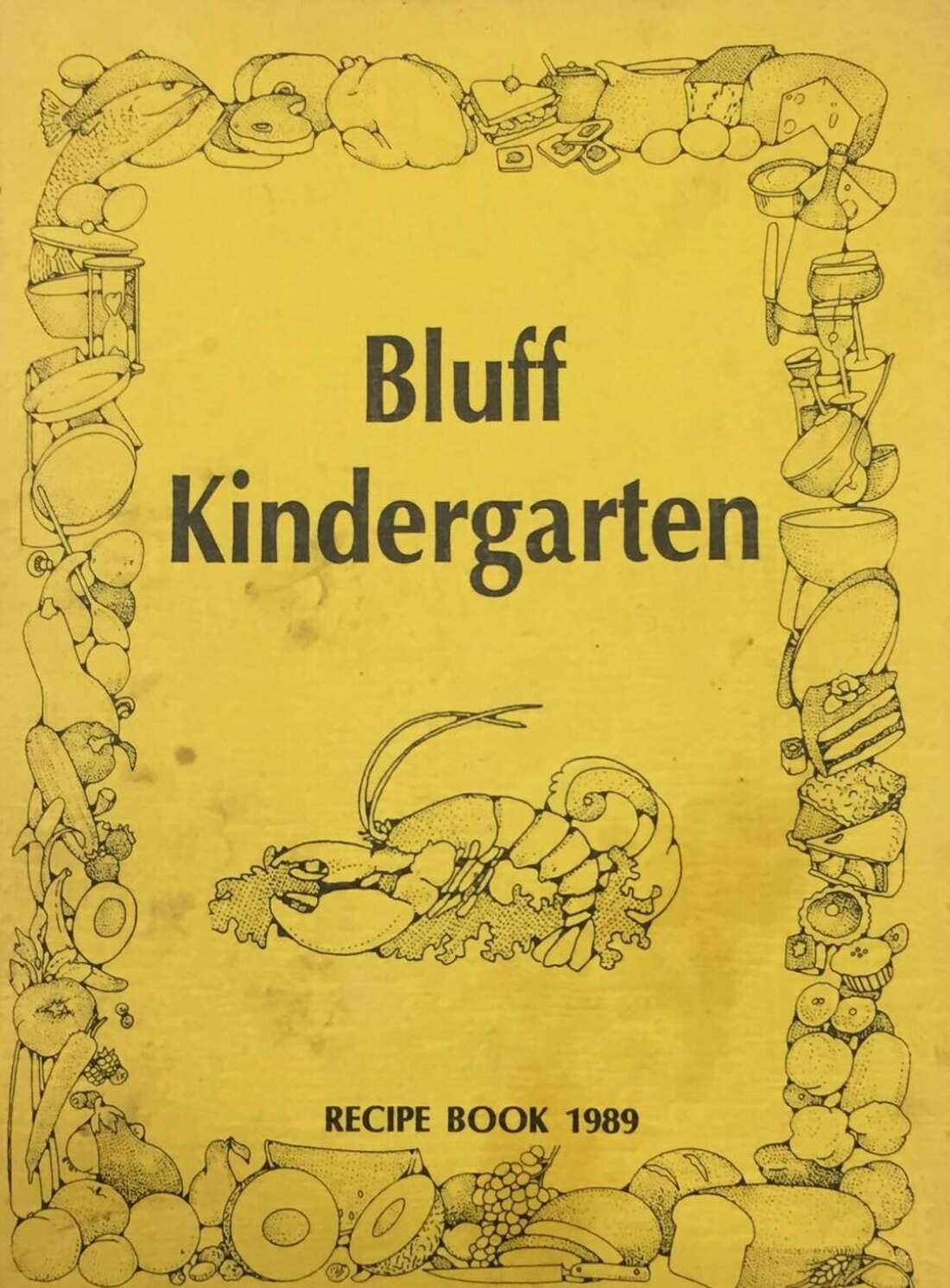 The condensed milk and packaged biscuit slice is surely the quintessential community cookbook recipe. This one is adapted from the Bluff Kindergarten Recipe Book from 1989. It is very simple but good to share over summer after dinner, I reckon!

Melt the butter, condensed milk and orange rind together in a saucepan over a low heat. Mix in the crushed wine biscuits and coconut so that the butter can soak into the biscuit pieces and the mixture becomes more cohesive. Press the mixture into a lined or greased 20cm square tin. You can sprinkle some more coconut over here, or stud in some crystallised ginger or pistachios. Put in freezer to set. It is also really great iced with some orange icing, using the juice from the orange, but as with all good community cookbook recipes, any variation works brilliantly.