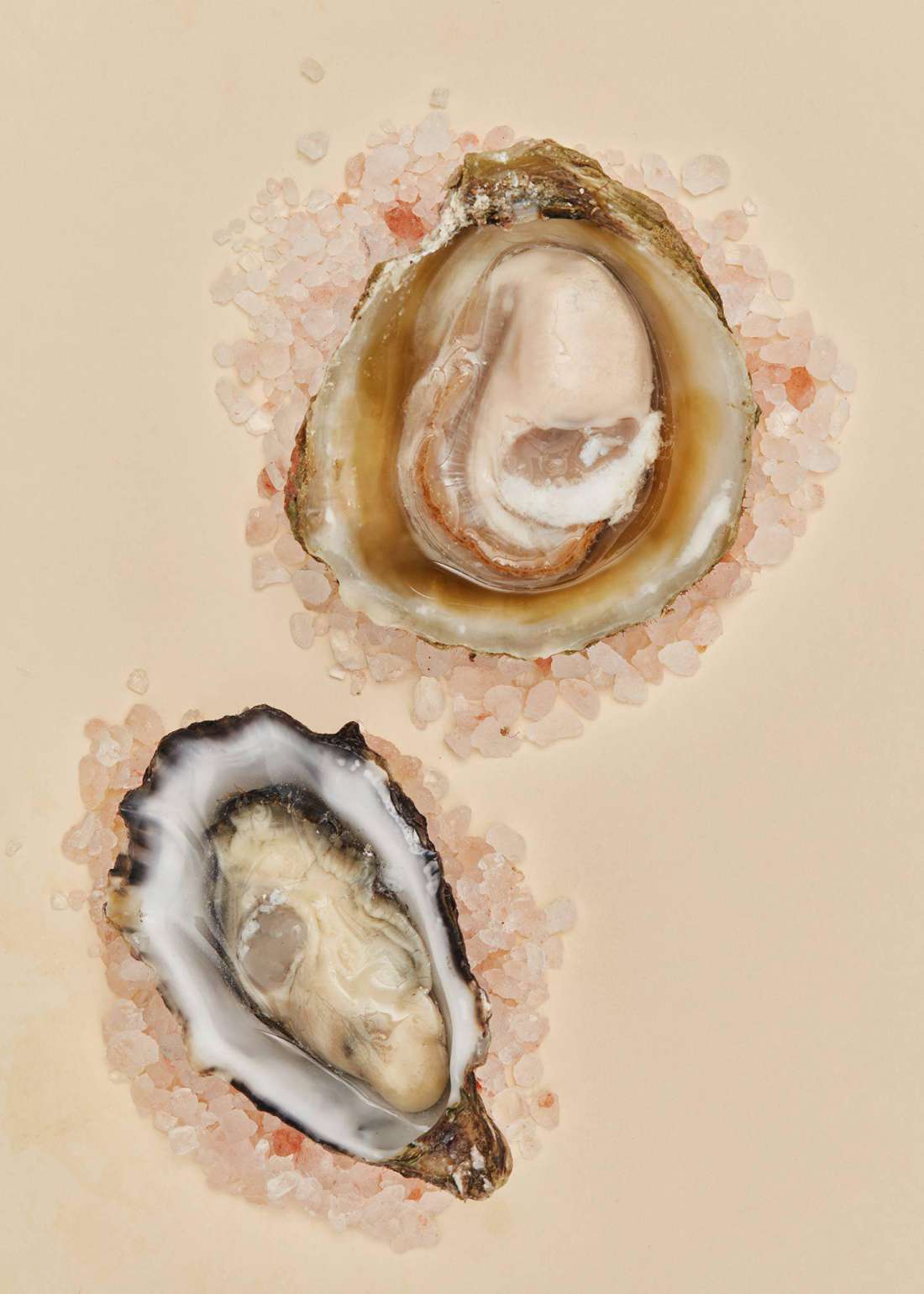 “The poorer a place is the greater call there seems for oysters. Look here, Sir, here’s a oyster stall to every half dozen houses — the street’s lined with ’em. Blessed if I don’t think that when a man’s very poor, he rushes out of his lodgings and eats oysters in regular desperation.”

Oh the irony that oysters, so long the preserve of the poor because they were cheap, nutritious and accessible, have become associated with having enough money for little luxuries. Oysters have played an important part in the diet in many cultures as they are not only easy to gather, but also to cultivate and farm. And in terms of nutrition, they are an excellent source of protein, zinc, iron, calcium, selenium and vitamins A and B12.

In Aotearoa, oysters have been harvested commercially since the mid 1800s. We have two native varieties. The rock oyster grows mostly in the north of the North Island; in intertidal zones on rocks. They are small and sweet tasting, but have fallen out of favour as they are slow growing.

The Bluff oyster, aka tio, dredge, flat, Foveaux Strait, is considered king (in part because of its fierce taste, but possibly also because it’s a relative of the much-favoured French Belon oyster). Most Bluff oysters are ocean harvested and dredged. They are full and flinty flavoured, plump with a firm bite and creamy coloured. They have a limited season from March to August, or until the annual quota is filled. On that note, the Bonamia virus almost depleted the stocks of Bluff oysters over the last few decades, so now the season is highly regulated. The same species is also being farmed in the South Island, mostly in Marlborough; producers include Tio Point and Kiwa.

“The poorer a place is the greater call there seems for oysters. Look here, Sir, here’s a oyster stall to every half dozen houses — the street’s lined with ’em. Blessed if I don’t think that when a man’s very poor, he rushes out of his lodgings and eats oysters in regular desperation.” Charles Dickens, ‘The Pickwick Papers’ (1836)

In the 1950s the Pacific oyster arrived via Japan, either in the ballast or on the hulls of ships. As they were faster growing than farmed rock oysters, they quickly became popular, and by the 1970s had displaced most commercial rock oyster operations. They are cultivated around the country, but most marine farms are based from Northland to the Coromandel.

Increasingly we are asking for our oysters by name, and in each area the flavour profile varies depending on the environment in which the oyster beds are grown. Waiheke’s Te Makutu Pacific oysters are delicate and sweet, Tio Point’s flats are plump and firm with good minerality, Clevedon’s Pacific are sweet and plump, while Mahurangi’s Pacific are briny and flinty.

It used to be impossible to get oysters in the shell – for many years we had to make do with pottles or harvest oysters ourselves to taste them in their prime. So when did it change? I contend that it is the likes of chefs such as Judith Tabron who started the ball rolling. Her restaurant Soul has been flying up Bluff oysters in the shell (as well as flying up shuckers to open them) at the beginning of each season for years; for the rest of us it is still near impossible to find Bluffies in the shell during the season at the local fishmonger.

The growing popularity of raw bars serving fresh oysters, cockles and clams has created a demand for shucking oysters to order, when they can be served at their optimum both in terms of freshness and in flavour. Hats off to Al Brown’s Depot, which pushed the idea of serving a variety of oysters from different locations to a customer base that appreciated the difference between a dead oyster from a plastic pot and a fresh one opened moments beforehand.

Lisa Hay from Warkworth-based Mahurangi Oysters believes the demand for oysters live in the shell is partly trend based, but it’s growing worldwide, alongside a demand to know provenance – where the oysters are from.

“I think it’s so important – nothing compares to a freshly shucked oyster… Once you have been taught to shuck an oyster, it gives such as sense of pride.”

Lisa notes that just as important is seasonality – an oyster harvested in late June or July is fantastically flavoured and plump compared to one harvested in January, when the oysters are spawning and the flesh is milky and the flavour mellower.

Online shopping has extended to oysters – many companies will supply directly and the turnaround is fast, usually less than 24 hours from the oyster beds to your table. So all you really need is an oyster knife and tea towel and you’re off. And if you’ve never shucked an oyster, before YouTube really is your friend – there are plenty of videos showing different techniques (I prefer the side opening method over the hinge method).

“A loaf of bread, the Walrus said,
Is what we chiefly need:
Pepper and vinegar besides
Are very good indeed–
Now if you’re ready, Oysters, dear,
We can begin to feed!” Lewis Carroll (Charles Lutwidge Dodgson) (1832-1898)
Alice Through the Looking-Glass

Because oysters are so glorious eaten just as they are, it often feels sacrilegious to do anything else to them. I like a good mignonette of minced shallots and cracked pepper with a good quality vinegar (be it white, sherry or red), but for the most part I enjoy them most when unadorned. That said, if you aren’t an aficionado of the raw, a very lightly dusted oyster panfried in a little butter and sandwiched between thick slices of buttered white bread, a squeeze of lemon (and perhaps a dash of hot sauce if you are feeling daring), is a pretty unbeatable combination.