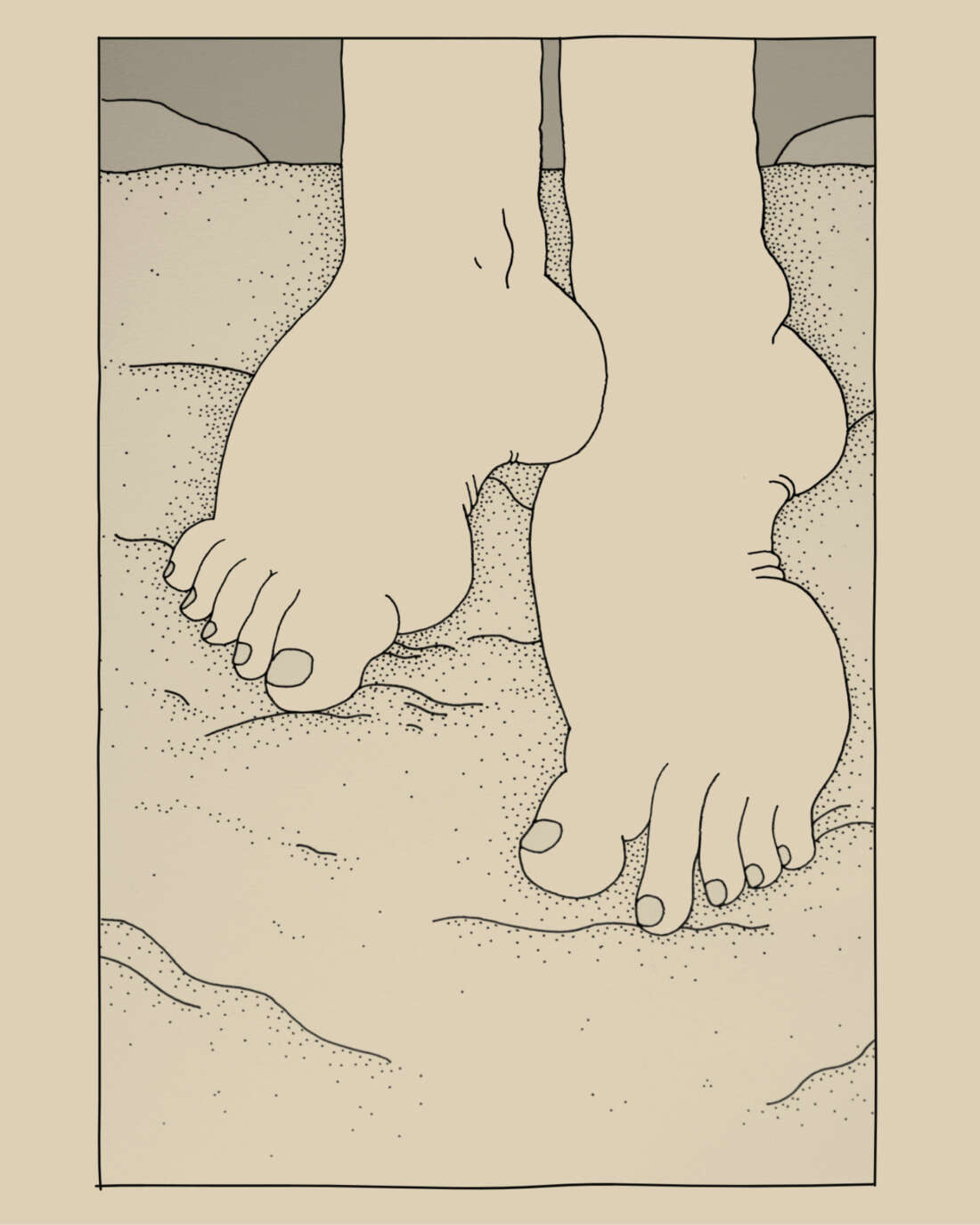 For the Love of Soil

Nicole Masters was 10 years old when she and her family left their small farm near Whenuapai north of Auckland — including goats, pigs, cats and a horse — to move to Hong Kong where her father had landed a job with Cathay Pacific. Accustomed to clean green grass underfoot, she liked to walk around in bare feet, which locals advised her against because of the dangers of “stuff on the ground”.

Nicole ignored their advice for five years, until she was struck with a mystery illness. “A fever came on, and my neck and shoulder muscles tensed up” Nicole reveals in the opening chapter of her book For the Love of Soil: Strategies to Regenerate our Food Production Systems, “I had a sore stomach and my heart was racing. When a rash broke out, I was rushed into hospital with suspected meningitis.” She was discharged without a proper diagnosis and for the following 15 years was plagued with continued symptoms, which she sought to address through every imaginable therapeutic avenue. Eventually she met an orchardist in Hawke’s Bay who suggested she visit a chemical detox specialist in Auckland. She promptly headed north to meet Dr Matt Tizard, a doctor well into his 80s, surrounded by books and viles. His process required a leap of faith for Nicole’s analytical brain, but his prognosis was Paraquat poisoning.

Paraquat is a quick acting herbicide, often used as an alternative to glyphosate (Round-up). A known eco-toxin, particularly in waterways, it has been banned in 38 countries including China and in the EU since 2007. Interestingly, 2007 was also the year New Zealand lifted its ban. Paraquat enters the body through ingestion or open wounds, like a cut on a foot. After only a few treatments with Dr Tizard, Nicole attained full neck mobility and her painfully tight muscles relaxed. What had been treated for decades as a structural spinal problem, was in fact, chemical loading.

Research into the impact upon human health from the background of low-level chemical exposure is mounting, “and it’s damning” writes Nicole, “we’ve all been exposed to a myriad of the genome-altering chemicals”. Even isolated Inuit populations in the Polar North have test results which shows them laden with heavy metals and “persistent organic pollutants” such as DDT, PCB, toxaphene, chlordane and more.

Nicole is now a leader in the Regenerative Agriculture movement; an independent agroecologist, systems thinker, author and educator with a formal background in ecology, soil science and organizational learning. Interestingly, she was already dedicated to reducing chemicals in the environment before Dr Tizard discovered she was carrying her own chemical burden.

“My body and heart knew” she writes, and adds that “listening to nature’s clues and signals is a crucial skill in regenerating landscapes. Listening requires we use all our senses, including common sense, in relation to the choices we make on the land, and for our own bodies…. We’re not stronger when we ignore our intuition. Just the opposite. We become duller. We dull our senses and thereby limit our opportunities for a rich and insightful life that results from paying attention and syncing ourselves with nature.”

Below is an excerpt from Nicole’s new book: “For the Love of Soil: Strategies to Regenerate our Food Production Systems”*

We know nothing. Well, maybe we know a bit, like 1% of 1% of 1%. Our knowledge is likened to standing on the edge of a void, shining a flashlight into the dark. And what our light illuminates is only possible through our present-day understanding, technology, and the questions we ask. What scientists are clear about is that we know far less about microbes than what we do know. Current biological estimates indicate there are over 36 trillion species on the planet. Of these around one million species have been mapped. You’ll hear quotes like “we know 5% of what’s happening in soil” when in fact it’s a moving target, and with every new discovery, another doorway of knowledge cracks open. When most people argue for biodiversity, very few consider that most of the diversity is microbial and located under our feet. Soil is the most important and essential ecosystem, linked to every function on the planet. It is a frontier of discovery; from climate change, to keys to human health, nutrition, and water cycling. Soils are incredibly exciting fields of discovery to be involved in.

There can be billions of organisms in a handful of soil, invisible to the naked eye. If you could picture yourself as a nematode winding through the soil environment, what meets you is a bustling metropolis, full of things to eat, and predators to avoid. These city streets are not safe places to walk; they are dynamic and vibrant communities. If we had the equipment to listen into the soil ecosystem, it might sound like wild chatter and blood curdling screams! Many of the organisms in soil make great subject material for a horror movie, like; Aliens and The Gift (Cordyceps mushrooms which burst from the bodies of insects), The Blob (slime molds), The Day of the Triffids (sting nematodes) and Frankenstein (Tardigrade). Down in the soil, away from light, there is no need for eyes, instead microbes have incredible sensory systems; are you food, friend, or foe? Microbes stream chemical signals to communicate with each other, and with their vital support system, the plants.

There are very few “good” or “bad” microbes, despite them being framed this way since Louis Pasteur’s pioneer work on “germ theory” in the 1850s. Disease organisms are present in every ecosystem and can often have positive benefits to plants and animals. E coli (Escherichia coli) for instance, often mentioned in panicked news bulletins recalling lettuce and spinach, offer immense benefits to us from birth, protecting us from other disease organisms and synthesising vitamin K and B12. Research facilities and pharmaceutical companies continue a narrow focus on pathogens and how to kill them. All this time our questions have been misguided. The questions we need to ask are what are the conditions that invite microbes to come and clean up? Diseases are often secondary to some other imbalance.

An elderly Australian stockman once told me; “You got livestock, you got deadstock.” This rule holds as true for sheep as it does to your microbial herd. If you want to keep your livestock alive and profitable, you need to follow the same basic requirements as sheep; they need air, water, food and shelter.

Consider the soil functions much like your gut: first you chew your food to make it smaller and then microbes and enzymes break it down further so nutrients can enter the bloodstream. The same action occurs in the soil, first by insects, ants, dung beetles and earthworms and then by an array of increasingly smaller organisms, from nematodes to protists, fungi, and then the tiny bacteria. Just as a dose of antibiotics, stress or processed foods can give you digestive upsets, the same occurs underground following what we call “disturbance events.” These may include natural events, such as flooding and fire, or human induced disturbances such as overgrazing, cultivation or herbicides, soluble salt fertilisers, fungicides and pesticides—what we call modern agriculture. Just as scientists are now discovering most of the health issues plaguing society are due to human gut issues, the same is happening in our soil systems. They have indigestion, gas, constipation, and even rampant diarrhea! How we can rebuild the microbial bridge and optimize ecosystem health is the biggest challenge facing society today.

The transformative shifts regenerative producers witness on the land have been difficult to rationalise based on current agronomical thinking. We’ve been ‘tickling’ the system with products that in many cases would be the equivalent of parts per billion and seeing plant and soil responses. Again, and again, we find that by subtly stimulating biology, or addressing enabling factors, responses can be far beyond what seems rationally possible.

That is until you consider the dynamic of Quorum Sensing (QS). Quorum Sensing is a microbial community’s ability to sense and respond to signals. The process of QS was first discovered in bio-luminescent bacteria in the 1960s. With growing concerns around the exploitation of antibiotics, medical research in the ‘90s identified QS’s role in streptococcus virulence. At any one time you may have some strep or candida organisms in your body without any complications. When populations are small, microorganisms are unable to express certain genes. Gene expression takes a community. When numbers increase, the full gambit of gene expression can now switch on, and you end up with a sore throat or a nasty itch.

QS signals have been found to explain the efficacy of many traditional Chinese medicines, taking the lid off for new discoveries with countless medicinal herbs and mushrooms. If medical science can replicate these signals, they could create a range of new medicines based on biomimicry to combat many common diseases. These chemical signals can replace the broad scattershot approach of antibiotics, potentially diverting the feared bacterial resistance apocalypse.

In soils we are only just beginning to become aware of the significance of these signals. The soil is saturated with thousands of metabolites, which create a sophisticated signaling network between plants, roots and microbes. These communication signals including hormones, organic acids, acyl-homoserine lactones (AHLs), peptides and other proteins. These signals enable organisms to identify each other, hide from or block attackers, or even camouflage themselves to sneak up on an unwary protists or plant root. Fungi can intercept the hormonal signals being sent by nematodes to ensnare them. The plant responds to signals produced by microbes to change root exudates, induce defenses, increase root formation, branching and elongation, lift transpiration and metabolism. These signals all contribute to the organic matter matrix, made up of carbon, proteins and organic acids.

In soil, QS may lead to virulent disease or the switching on of the genes responsible for immunity and defence, biofilms, drought resilience, and plant growth promotion. Gwen Grelet, a vivacious soil molecular ecologist based at Landcare Research in New Zealand, believes that deepening our understanding of how these organisms communicate to each other has huge value to producers. “Through understanding a little of the complexity, we can adopt methods which encourage the communication, which supports optimal health and integrity.”

Dr David Johnson, at New Mexico State University, is showing that the QS signal proteins, the regulation messengers, are up to 10 times higher in healthy soils than stressed ones. These signals correlated with an increase in the ‘housekeeping genes’, the genes for drought resistance, plant growth and regulation, nutrient increases, and substantial increases in soil carbon use efficiencies. Around 60-80% of the human immune function is due to gut microbial actions; Dr Johnson suspects the same holds true for soil and plant health. Soil truly is the new frontier for exciting breakthroughs and discoveries. Through deepening our understandings of how we can feed, support and harness our micro-herd, we hold the key to creating regenerative, productive, and profitable landscapes.

* “For the Love of Soil” showcases examples of the tools and principles producers are using to regenerate their soils. Describing a step-by-step triage of actions, so that you too can regenerate your land.

Beneath the soil: A reclamation of te reo and Māori food sovereignty.
Hua Parakore: A brief history