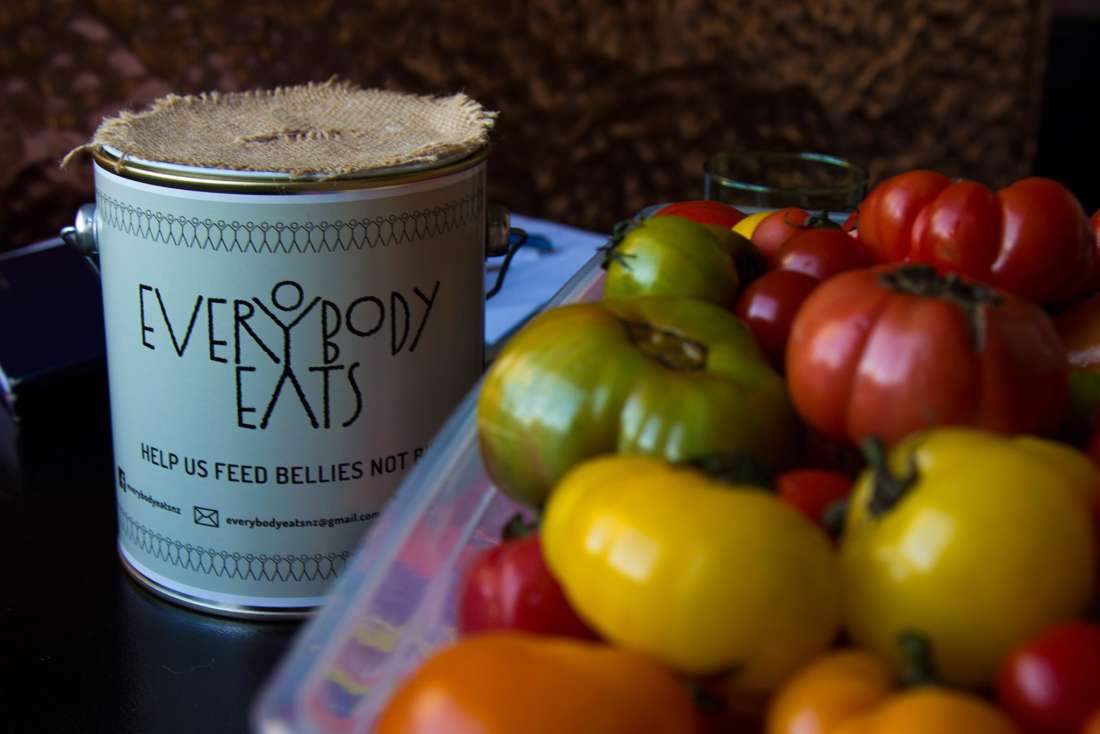 Every Monday night in Auckland’s St. Kevins Arcade a small crowd gathers at the top of the stairs as the clock inches closer to 6pm. Most people seem to know each other one way or another – from the government housing on Grey’s Ave, from sleeping on the streets, or from the surrounding offices, restaurants and shops – but they are all here for the same reason, to have some dinner.

Everybody Eats is a weekly not for profit dinner that uses rescued food destined for the trash to cook a three-course meal, offered to the public on a pay as you feel (PAYF) basis. The PAYF model means that people in need can eat for free, while those who can afford it pay by donation. Staffed by volunteers and cooked in Gemmayze Street’s kitchen, Everybody Eats has quickly gone from feeding roughly 100 people, to over 300 on their busiest night, with queues forming down the arcade mid-service.

While studying in the United Kingdom, founder Nick Loosley wrote a dissertation about what happened when people cooked and shared food together, and the problems that solved within the food system. He looked into everything from dumpster divers who fed homeless with their findings, to Jamie Oliver’s Ministry of Food, but it was the PAYF cafes that he felt were having the greatest impact, and upon moving home he set out to replicate something similar here. Nick says he hates waste, so psychologically he finds that aspect of it very satisfying. “I like the idea of proving that there is a model out there that uses things people don’t typically put value on – surplus food, empty space, cooking and serving people they care about – that still works in a system that is focused around economic gains.”

As well as saving perfectly good food from the bin, Nick says the dinners also help solve some of the isolation problems often associated with people in need. “A lot of the people that come are quite lonely out on the streets and they don’t sit at a table and share food with people very often. As soon as you put all these people in a nice comfortable space like St. Kevins Arcade, and you put a smile on their face, they become human again to a lot of the people who walk past them on the street.” In terms of location, the arcade is a dream – it’s open, communal, unintimidating. The warmth thrown out by the blazing heaters is matched by the fuzzy feelings that fill the air every Monday night, as smiles, hugs, pleasantries and gratitude are freely exchanged over a meal. 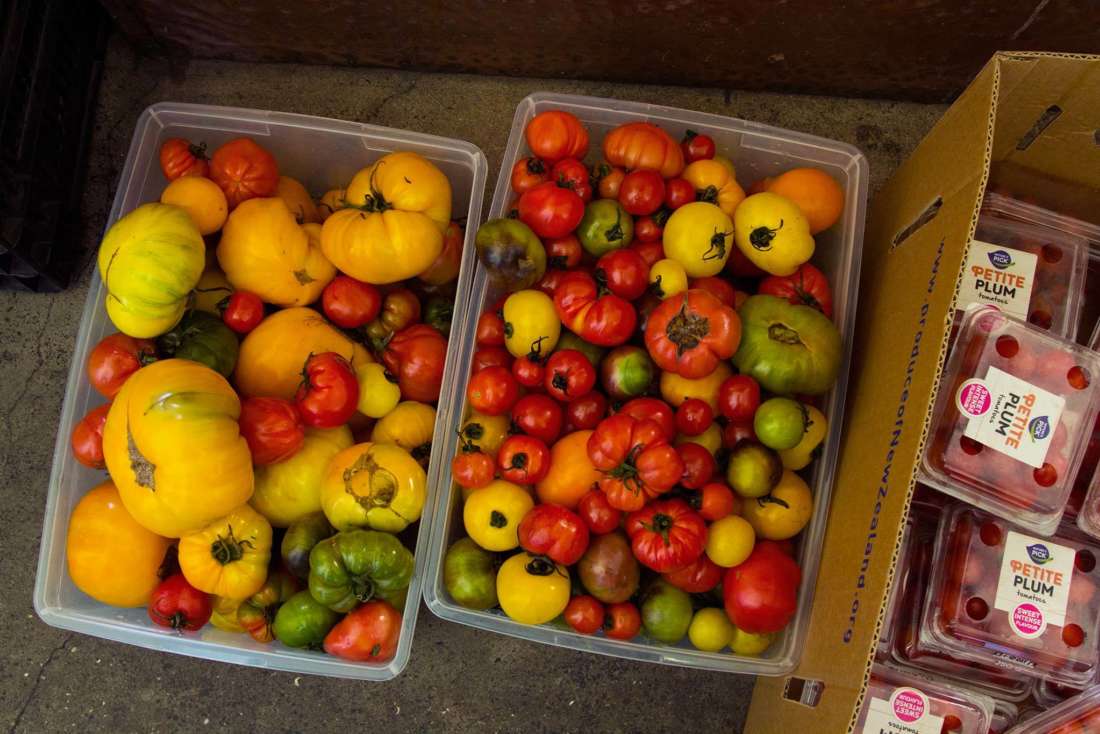 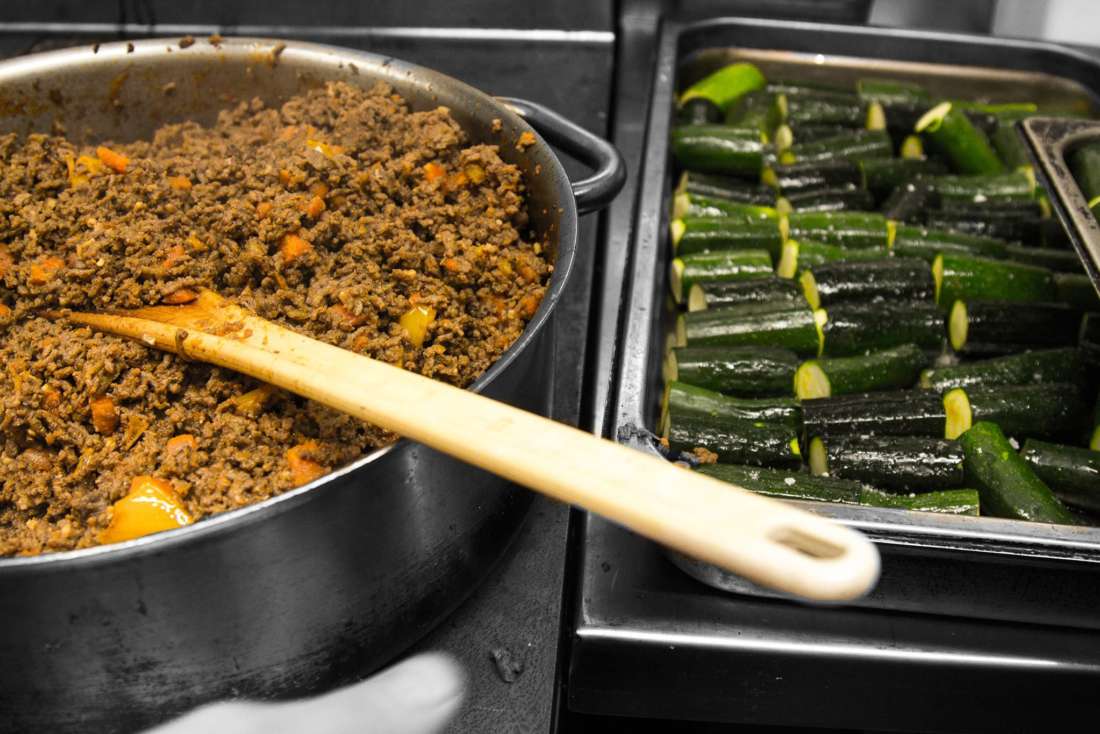 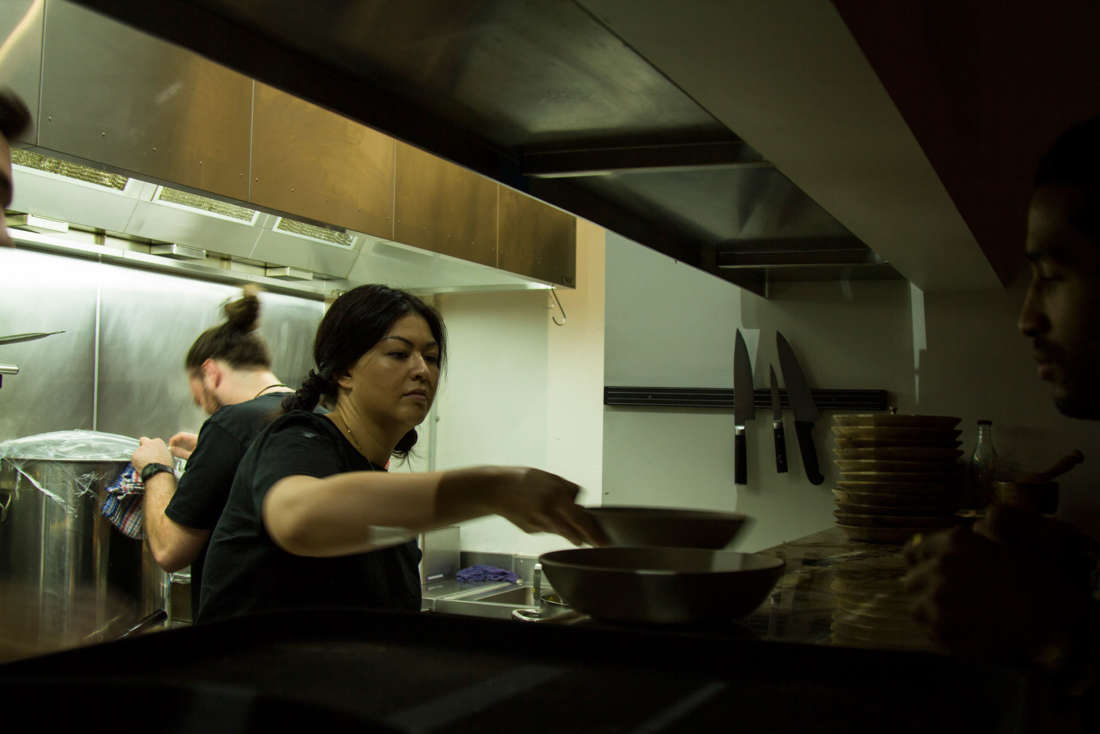 Since its launch in June, Everybody Eats has become a weekly highlight to all who attend. Nick says the convivial atmosphere which comes from getting people from different walks of life to sit down and share the same food is what it is all about. There are people who come every single week, ranging from pensioners to solo parents who catch the train from out west to get some help feeding their kids. One regular customer now comes as a volunteer, and sits on the door as a familiar face and pseudo-security guard, shaking hands with everybody as they enter.

Apart from one incident when the donation tin got jacked (Nick and a few of the regulars gave chase on foot, the thugs were apprehended and most of the donation money returned to Everybody Eats), Nick’s initial concerns around security have not been an issue and the crowd has largely been self-governing, keeping each other in check if people are misbehaving. Nick says the “K Road Mafia” have got his back, “People seem to have quite a lot of respect for the regular volunteers that they recognise and people have quite a lot of respect for me. I think that as a whole, if there are 90 people sitting in the arcade and five of them decide to kick off, then there’s at least 30 or 40 people there who would stick up for Everybody Eats.”

This community mindedness is largely responsible for what makes Everybody Eats tick. Nick says Samir and Liane Allen – the mother and son who own Gemmayze Street and graciously hand over the keys to their restaurant every Monday night – jumped at the opportunity to give something back to the community. “It’s very important to them, it strikes a chord with them culturally. They are people who give a shit about other people for sure.” And the support from the wider hospitality community has been humbling, with some of our city’s most loved restaurants lining up to cook. So far, teams from restaurants such as Cazador, Mudbrick, Bird on a Wire, Gemmayze Street and The Cult Project have all had a go in the kitchen. 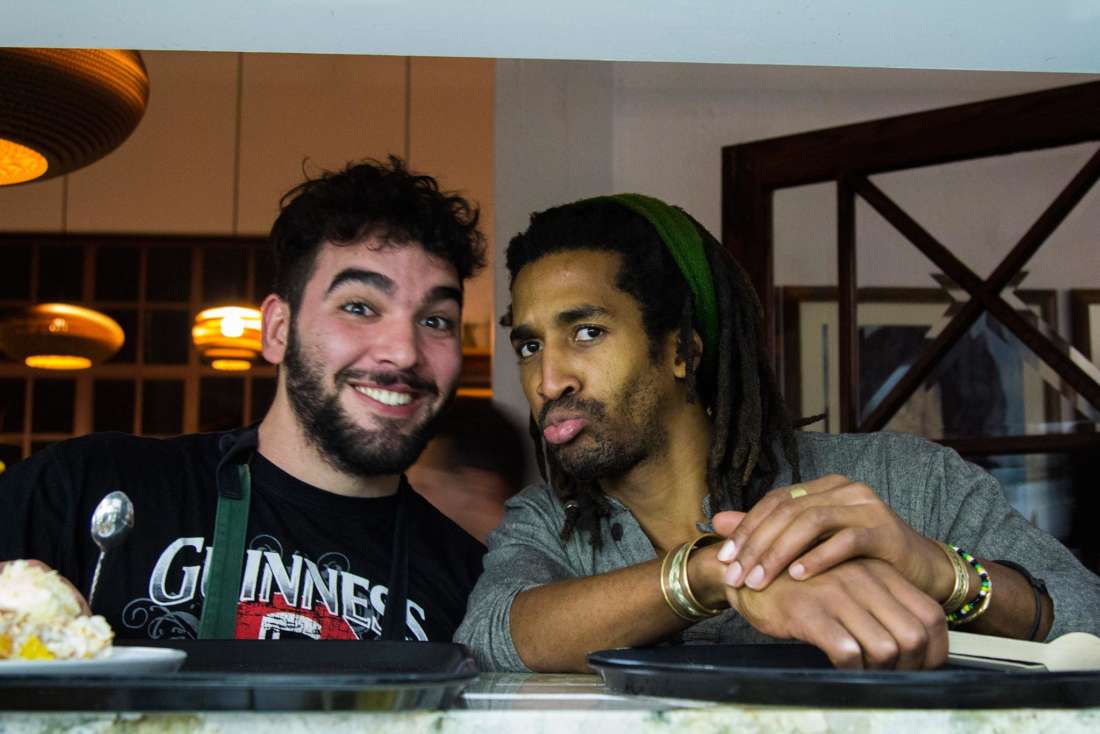 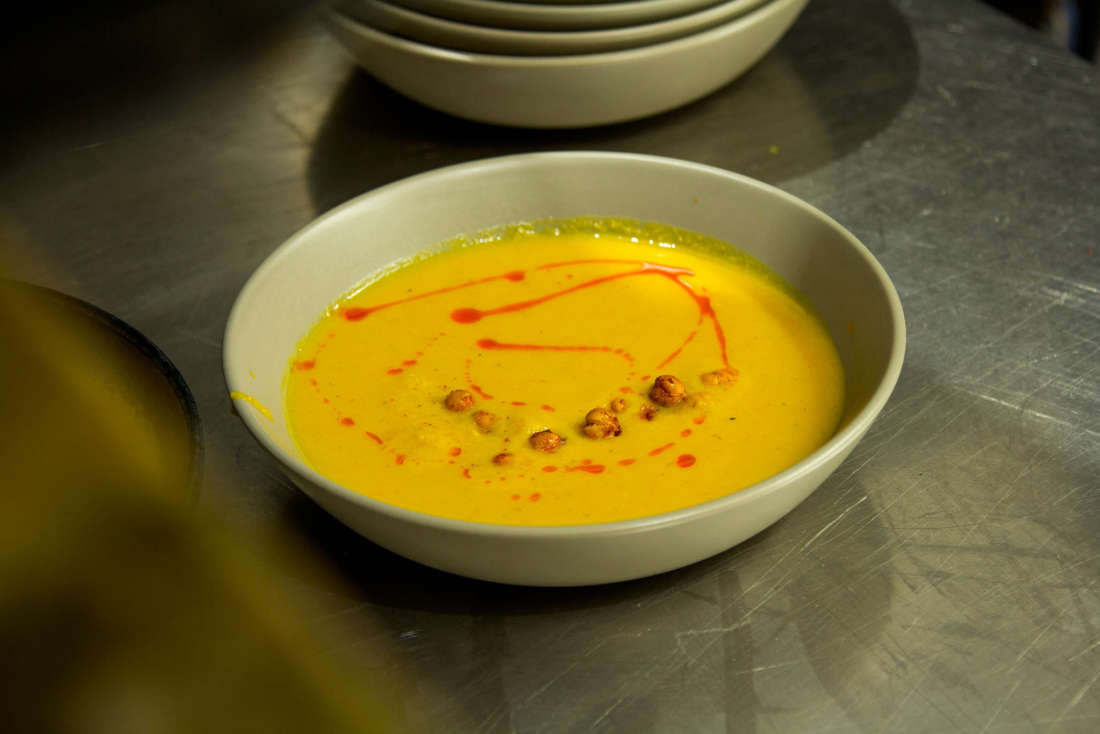 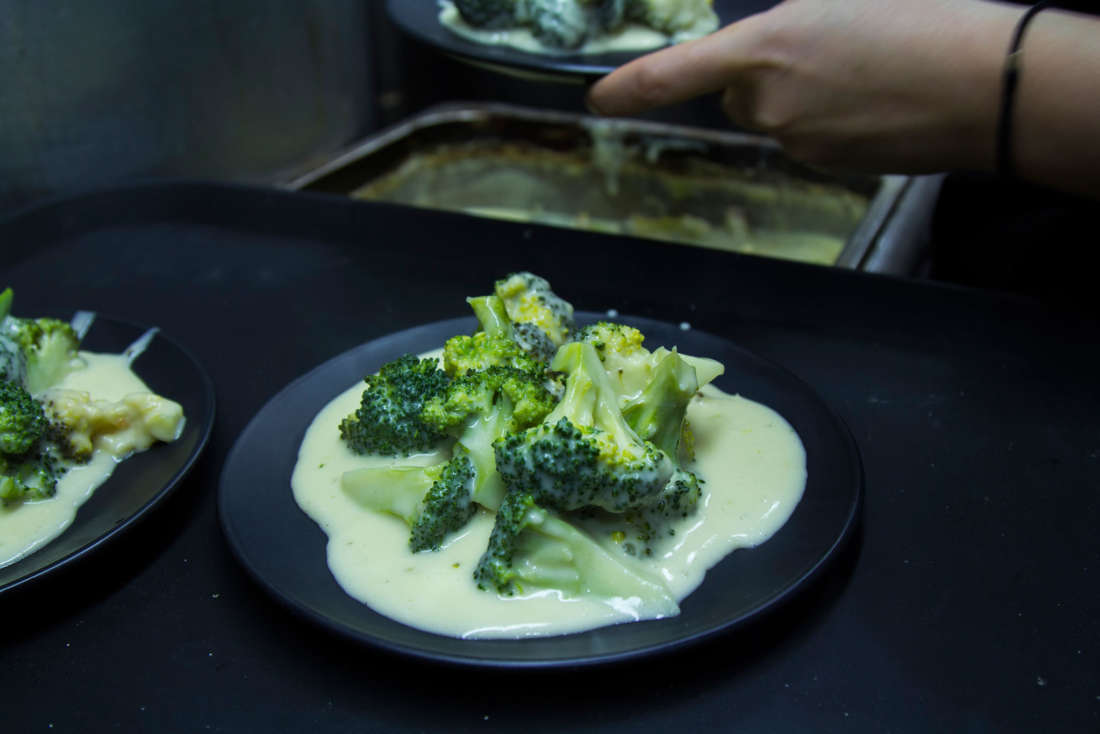 For seasoned chefs, the challenge of showing up to cook, not knowing what they will have to work with, is gratifying. This is food that has been deemed no good for sale, but is perfectly edible – mince that has gone a little grey and lost its aesthetic appeal; brassicas, bananas and tropical fruits that are a little brown and bruised in places; and packaged goods on the cusp of their best before date – most of it comes from a single supermarket, and the rest comes from Kiwi Harvest. The sheer volume that is rescued is harrowing when you start to multiply that on a global scale.

It is estimated around one third of the world’s food is wasted throughout the supply chain. When we throw away food, all of the resources that went into producing it – time, money, water, fuel, land – also go to waste. And when you consider there is a line down the street outside the Auckland City Mission at meal times, it’s a wonder why we aren’t matching waste with need more often. Nick says the project presents the opportunity to ask some challenging questions of legislation, big business and the food system in general, “Being part of that grassroots movement and driving change is quite exciting. I also like to see everyone winning for different reasons week in week out – guests, volunteers, chefs. I really just see the model as a no brainer as well. There is food available, people to cook and serve it, and people that need it.”

Early next year Nick plans to expand Everybody Eats and learn more about what it can be by doing another pop-up either out West or in South Auckland, with the hope of it turning into a permanent space. “I have a feeling that a permanent space might be more suited to those areas where there’s a lot of poverty and more families, and more people that have been left behind by the system. I think there’s possibly families out west sleeping in cars who just couldn’t afford to pay rent, and if I can put food in all of their stomachs, then maybe they’ll have 50 bucks to pay rent that week.” 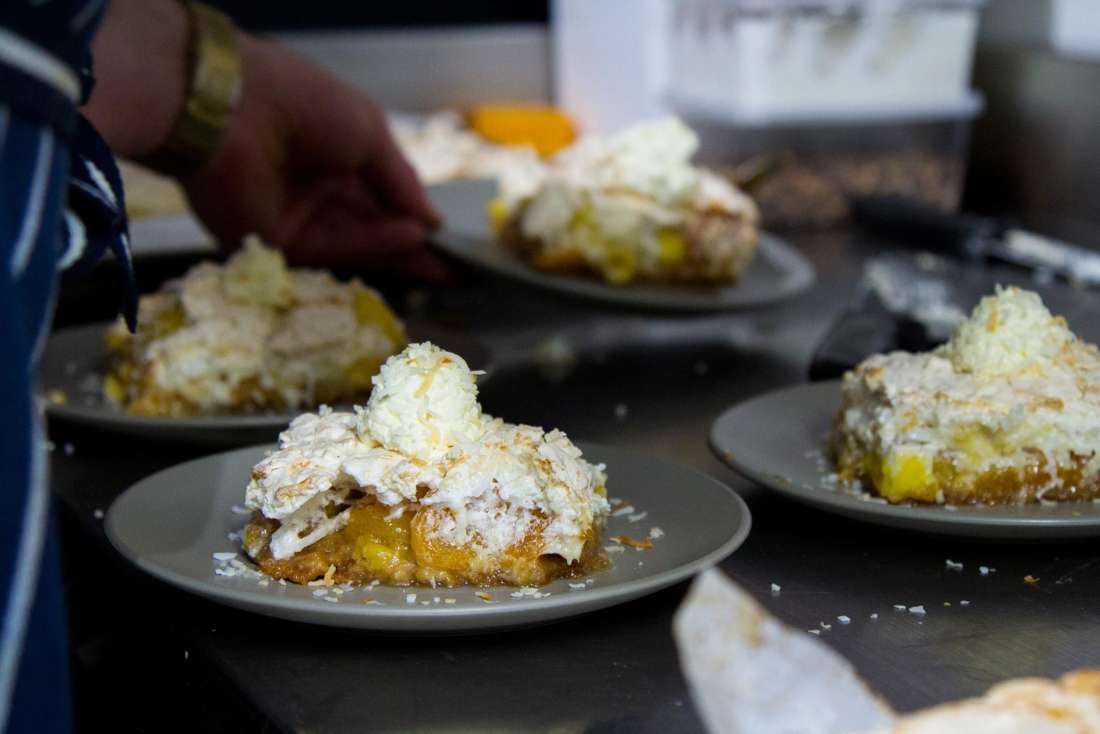