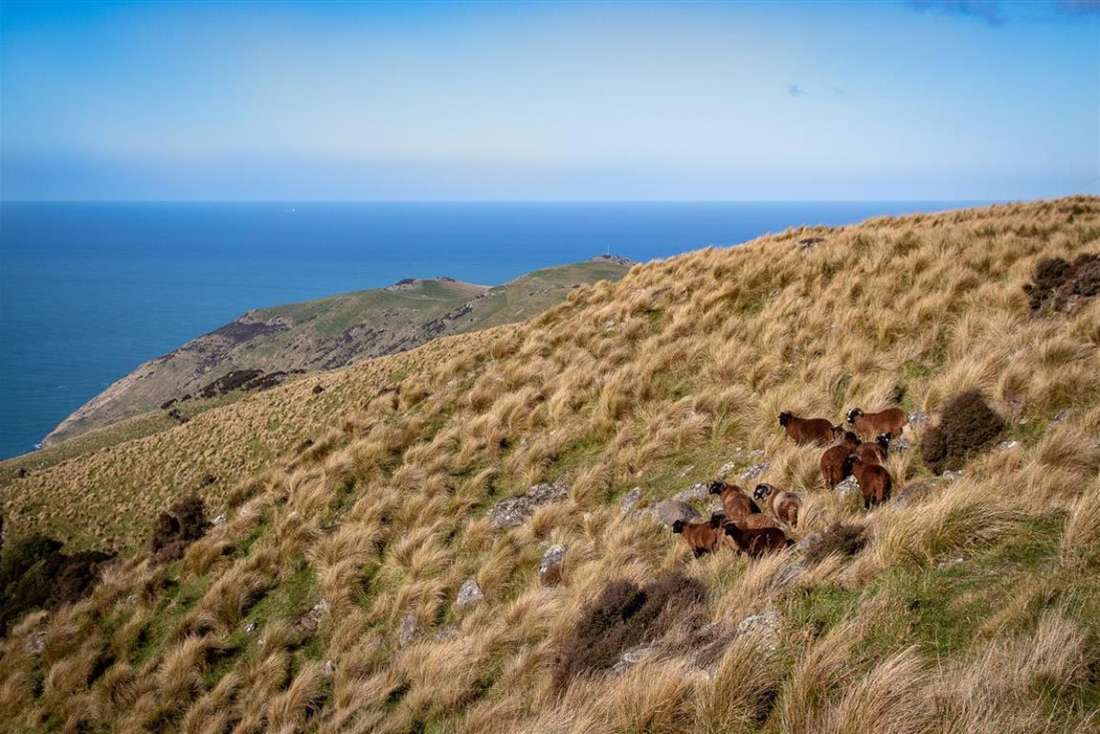 Born to be Wyld

Rugged, resilient and free to do as they please, Roger Beattie’s wild Pitt Island Sheep are just as nature intended.

Roger Beattie has had a long love affair with Pitt Island sheep that began 42 years ago in the Chatham Islands. Although it was his job to cull them, he grew to admire these rare and rugged sheep for their tenacity, resilience, and ultimately – when they end up on his BBQ – their deliciousness.

He knew that one day he wanted to farm them, so when he left the Chatham Islands he and his wife Nicki bought a farm on Banks Peninsula. Flanked by Akaroa Harbour and the South Pacific, the farm has similar conditions to Pitt Island, an ideal home for the 500 sheep they brought over to start their flock. As sheep tend to do, they multiplied and they now have roughly 2,500, with a third of those reverting back to their wild state – meaning they can’t be mustered in and are free to roam wherever they please.

“We were thinking, how the hell are we going to deal with this? We logically thought the best way would be to shoot them, rather than put in endless fences which would cost a fortune,” Roger explains, “There were a few bureaucratic obstacles to deal with but I went through the hoops and I’m now a certified hunter and we supply to a certified processor and the meat gets distributed to New Zealand’s top restaurants and lodges. It’s a very organised, very structured hunting regime, we are not going, here’s a few wild sheep let’s hunt them. We are saying, how are we going to harvest these animals in the wild and deliver them to discerning customers in the best way possible.”

The link between how we farm, what we eat and our health is something Roger and Nicki – a classically trained doctor – are passionate about and farming in this way, with minimal intervention, aligns with their beliefs. Roger describes the wild sheep as “pure”, they haven’t been altered by man for fast growth, quick fat cover or big size. They are just as nature intended and live a content existence which he says contributes to the quality of the meat. “If you muster sheep in, separate them off, stick them on a truck for half a day, wash them at a meat works and then butcher them, that alters the chemicals running around inside their body. Compared to an animal happily grazing and then, bang! There is no stress on the animal, we don’t chase them or anything, we just strategically position ourselves, we’ve got very accurate rifles and we shoot them from a distance.”

“We’ve been breeding sheep in New Zealand for so long, worshipping at the altar of productivity, that we’ve got away from what nature delivers.”

They do three hunts a year – there’s Christmas lamb; Easter lamb; and winter feast lamb – this approach allows people to taste the distinct flavour profiles as the lambs move through the seasons. The milk-fed spring lambs which will be hunted for the Christmas season are more tender, after they are weaned they develop a stronger, fuller flavour. With no point on the farm being more than a kilometre from the sea, Roger suspects the sheep get more wind-blown salt than any others in New Zealand. Their diet consists of a different variety of grasses that are tolerant to salt spray, and because they have the freedom to roam wherever they please, they clamber right down to the coastline, where they can sometimes be found snacking on seaweed – giving them a unique flavour that claims to be “salted like the sea”.

Wild sheep live twice as long domestic sheep because they haven’t been selected for productivity. Roger says messing with nature, doesn’t deliver the best results. “Every time you select for one productivity trait, you deselect for a whole bunch of other survivability traits. Nature works that you can’t have everything, and everything is a trade-off. Scientists and chemical companies and so called ‘clever’ farmers think they can get genetic gain, but it’s not what we’ve got in New Zealand and around the world. They are having to reach more and more for the chemical bottle, which is madness, that’s not sustainable.”

Roger believes there are double standards when it comes to animal welfare and when a law was recently passed to stop tail docking cattle Roger was moved to make a submission on behalf of his fluffy friends, “What’s the difference between cattle and sheep? Do sheep not suffer pain but cattle do? Part of their argument is that sheep would suffer from fly strike and everything else but I say no. We’ve been breeding sheep in New Zealand for so long, worshipping at the altar of productivity, that we’ve got away from what nature delivers. And when you leave it up to nature or you work with nature, it produces sheep that don’t get fly strike, don’t need tailing, don’t need drenching, don’t need dipping, don’t need all of these vet products or chemical products put in to them.”

He says we should be eating more wild meat in New Zealand, but there’s too much bureaucracy standing in the way, “We need to objectively be measuring things rather than putting bureaucratic obstacles in front of people. We should be measuring the bacteria on the meat, the things that are harmful, the residual chemicals from dredging and dipping and that sort of thing. Rather than making it harder for people like us to go out there and shoot sheep on the hills. I would say that there’s less chance of contamination the way we do it, than there is in putting them through a meat works.”

Roger hopes that one day they will be able to provide wild lamb directly to consumers, allowing people to buy the whole animal. But like Roger’s life-long dream of farming Pitt Island sheep that was 42 years in the making, good things take time, “This is intergenerational stuff that we are developing here. We are in no hurry to get it wrong.”

Digital meets local at Hoko Loko
What does it all meat?