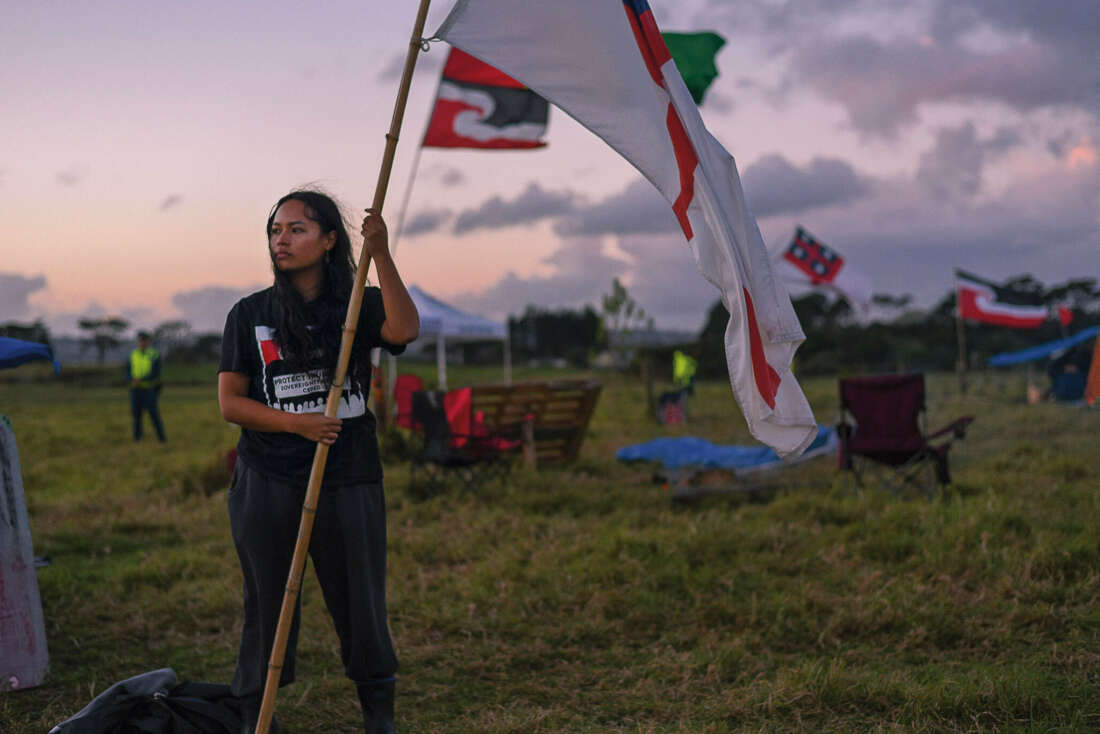 Beneath the soil: A reclamation of te reo and Māori food sovereignty.

Wai, kai, whenua, whare— in that order. These are the four things— according to renowned Tohunga Rereata Makiha— that sit at the centre, not only of our physical needs as humans, but at the centre of our spiritual, cultural and social needs to exist within community. Food in particular has been at the heart of ceremony and celebration in Aotearoa and across the world, for millennia. Sharing food, whether we have little or much, can be an expression of love and care— as we call it within te ao Māori, manaakitanga.

When we (Haylee Koroi and Hana Maihi), look out into the urban sprawl of Mangere, near the airport eating dumplings, we think of how these four pou (pillars) have become disconnected. We don’t know how water arrives to our taps, where it has come from. We don’t know where the food in our bowls was grown or how it came to be in Auckland. One thing we do know of the land, is that the nearby airport is built on the bones of ancestors who once lived here, with the dirt and soil quarried away from nearby maunga. The story certainly seems grim.

We don’t know the whakapapa of our food, and this is having a huge impact on the environment, and in turn, on our bodies. As the climate changes, and water and food sources grow scarce, it will be those who can find sovereignty in food practice, and love and trust in community that will be able to respond to rapid change. The desire to know where our food comes from is growing, as more people become aware of the costs of this disconnect. To be kaitiaki surely, is to know the processes of food production that enable us to eat the food on our plates.

Whether it’s knowing that the chocolate we eat fuels palm oil industries (built on the decimation of Amazon forests), that the intensively farmed beef we eat contributes to methane emissions, or that the perfectly shaped fruit we consume was made possible by the latest pesticides and genetic modification technology, being aware of the origin of our food is critical. If not knowing the whakapapa to our food can cause all sorts of harm, it goes without saying that reconnecting with this knowledge is the very first step in finding a sustainable way forward. So, with full stomachs, we return to the region once renowned for its traditional cultivations, Ihumātao, to be reminded that the answers sit in our long histories, our knowledge systems, the language of the whenua. 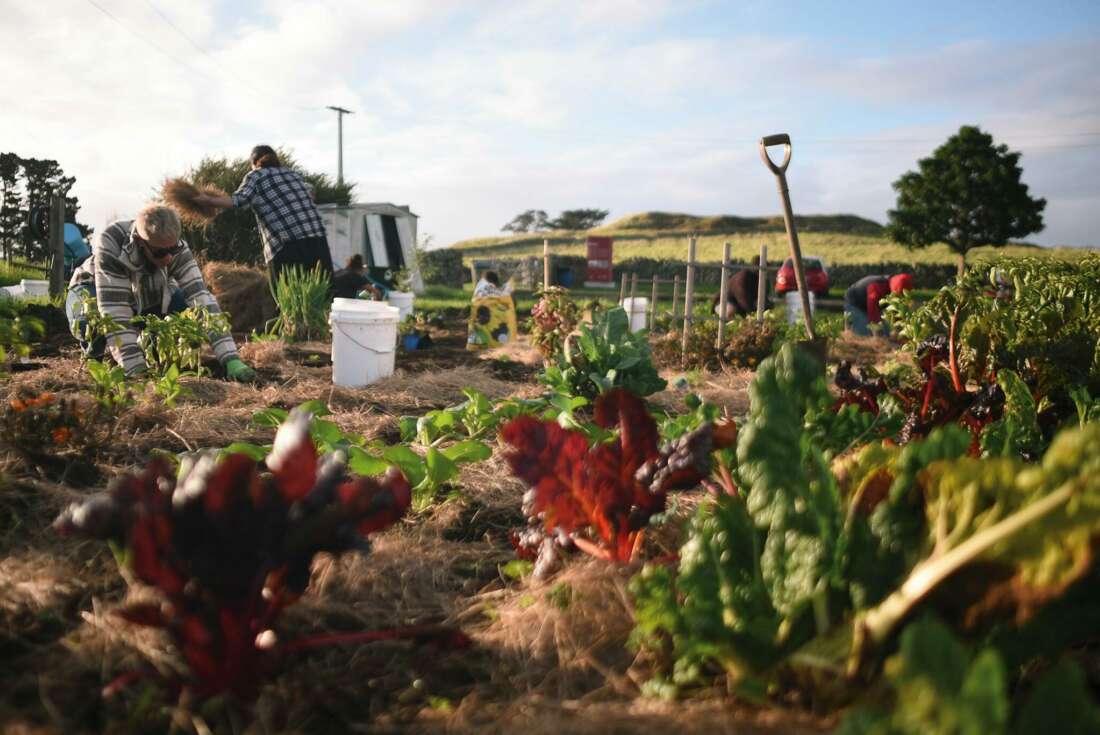 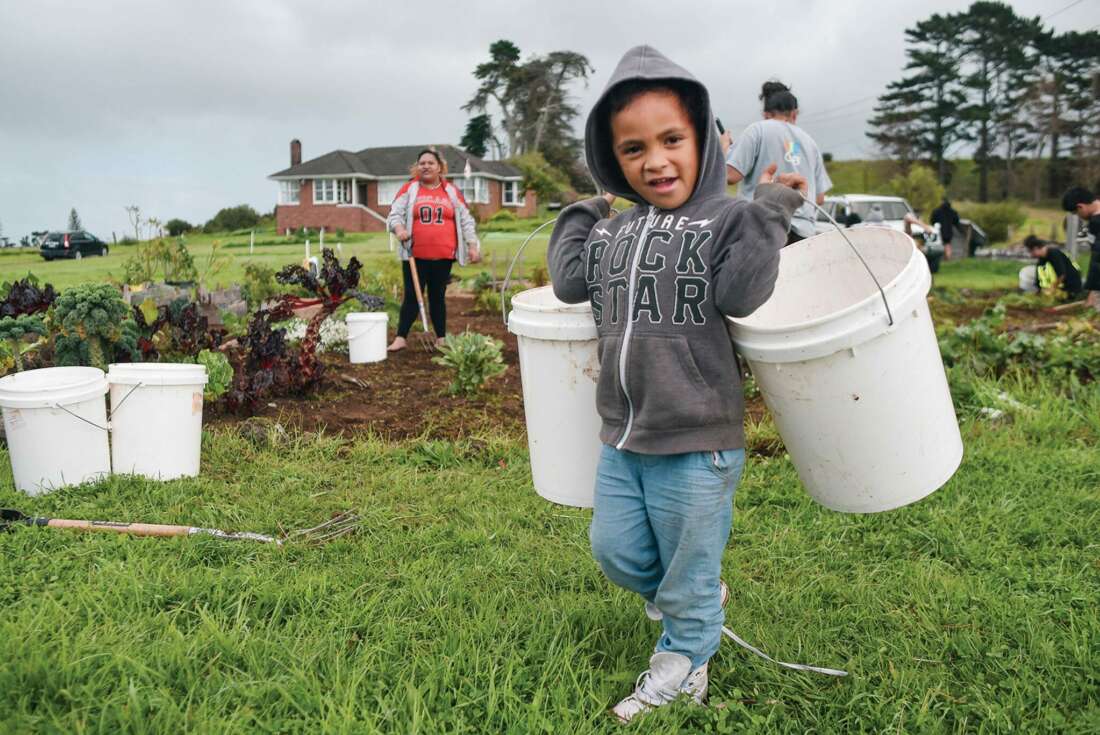 Te reo Māori, and in particular whakataukī (proverbs) and tūwāhi (Māori place names) are important for lots of reasons. They can be portals into the past, they can remind us of great rangatira (leaders), historic events, or they can be indicators of traditional food sources which were relied upon and enhanced by tangata whenua in pre-colonial times. As Hirini Moko Mead says,

“Named features present a cultural grid over the land which provides meaning, order and stability to human existence without which we are strangers on the land, lost souls with nowhere to attach ourselves.”

As a mokopuna of Ngāti Whātua, Hana remembers a pertinent whakataukī (proverbs from within the region) ‘te pai me te whai rawa o Tamaki,’ ‘the wealth and abundance of Tamaki’, and ‘Tāmaki Makaurau’, ‘Tāmaki [the maiden] loved by many suitors.’ The whakataukī refers to the region’s reputation of abundance given the fertile volcanic soils, rich kaimoana (marine resources) and its advantageous location for trade and movement.

A similar whakataukī ‘Tamaki Kainga Ika me Ngā Wheua Katoa,’ ‘Tāmaki where fish and bones are so succulent that they are all consumed,’ speaks not only the abundance of the harbour but also the tikanga that was implemented in harvesting fish smaller in size to what MPI fishing regulations require today. Rereata reasons that the premise of this fishing tikanga was based on an intimate relationship of the taiao (environment) and an understanding of roles within it. For example, the larger snapper, likely the primary breeders, wouldn’t have been eaten. Large snapper, Rereata explains, also had a role of thinning out the kina beds so the kelp could grow. Everything had a role in maintaining the balance of the food system. In looking to past place names to inform the present, the clash of law and tikanga is yet to be resolved in regard to restoring the environmental balance that was once maintained and supported by kai harvesting practices.

Maungawhau, situated in what is now called Mount Eden, depicts a mountain abundant in whau trees, whose wood was used for the floats of fishing nets. Kūmara were also grown here on the maunga, and on a good day you can still see the remnants of old kūmara pits. Our tīpuna had adapted cultivation methods for kūmara to thrive in the colder, harsher climate of Aotearoa. Crops covered the whenua (land) for about a kilometre out from volcanic cones in Tāmaki. All of these are a reminder of the aforementioned whakataukī.

When we look to the land now, our view of the landscape changes, as we imagine thriving food sources, ecosystems and centres of trade. Kaituna becomes more than an awa of Te Arawa, but a water system abundant in eel; the Raukumara forest is now more than a collection of trees but contains small forest patches cleared for kūmara crops; Pākanae, the stronghold of the kanae or mullet, becomes a centre of seasonal trade.

In some instances however, only the names stand now as place markers,and we are left with more questions than answers. Haylee remembers the lake Tāngōngē in her home of Pukepoto, which was drained in the early nineties for farmland. The lake was once a food basket for the people residing there— they relied on it heavily for freshwater fish, and to irrigate their gardens. The name itself alludes to the nearby presence of taro. She wonders about the loss of knowledge relating to the taro, how was it grown, cooked and how it arrived on our northland shores.

The confiscation of Māori land, and the subsequent exploitation of land and waterways for intensive animal farming is not a story that is held exclusively within Haylee’s ancestral lands. It’s an experience felt by hapū and iwi across the country, including at Ihumātao, as farming was identified early on as a primary food export which would fuel the growing colonial empire within New Zealand and globally. Māori became disenfranchised from their primary food sources and their knowledge base. The question now is, how do we move forward towards food sovereignty and thriving ecosystems, with te reo Māori me ngā tikanga (the Māori language and its protocols) as a guide? 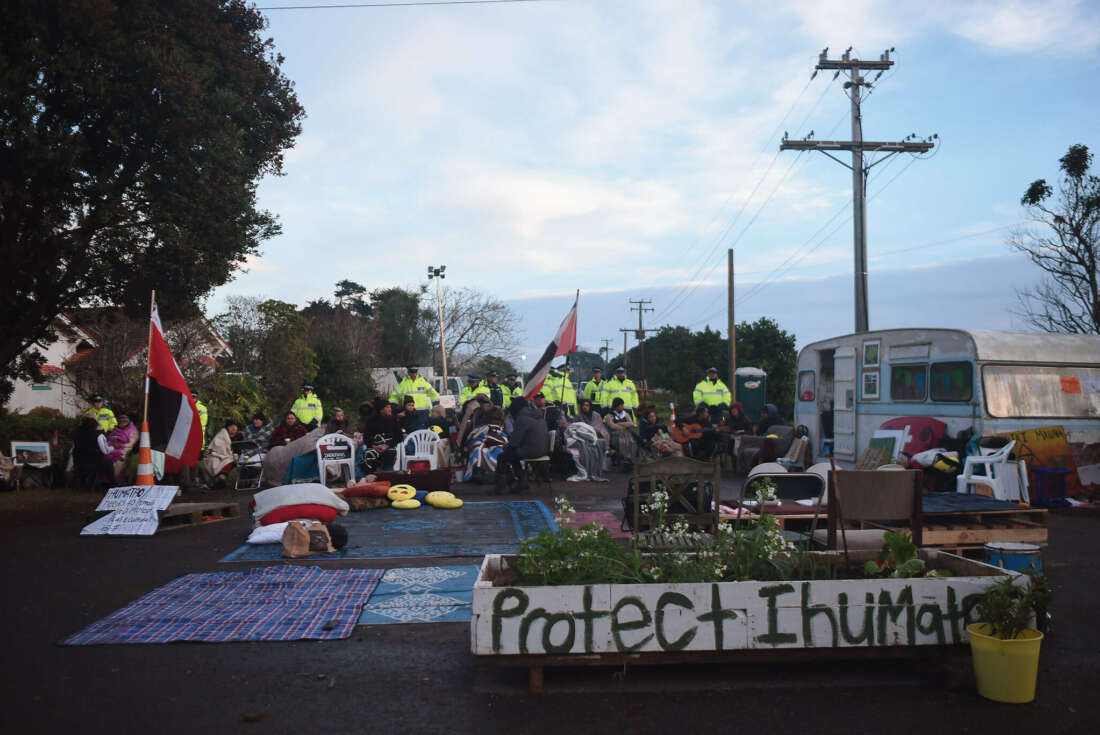 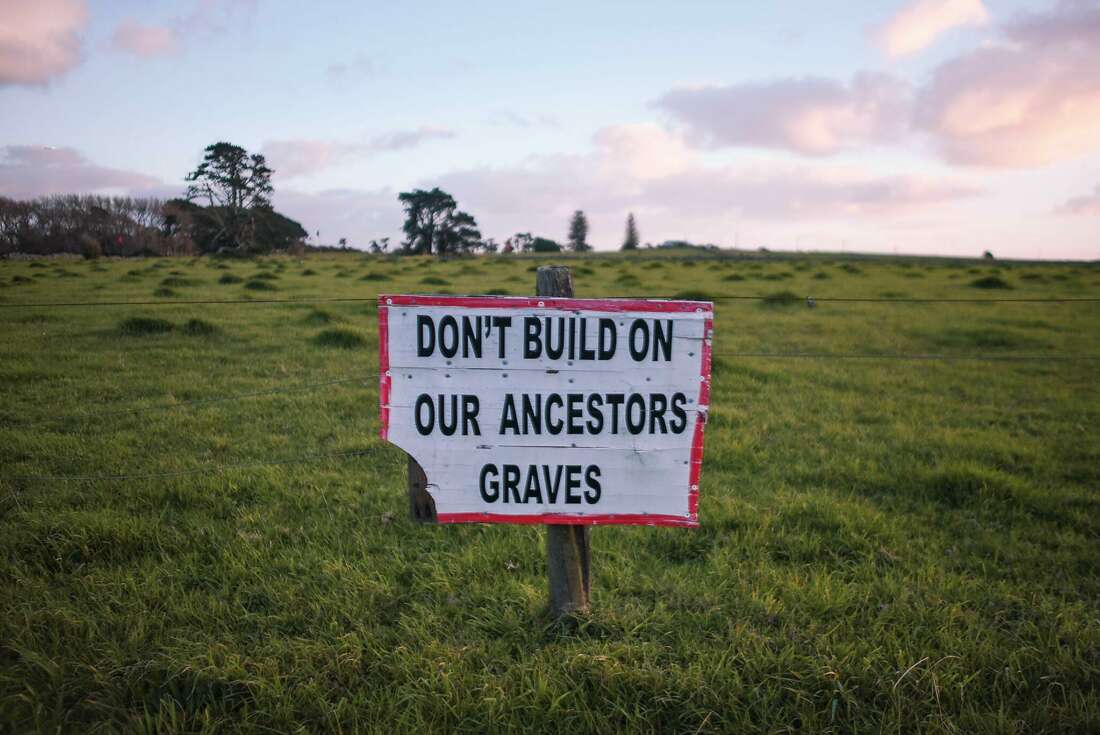 Kelly Marie Francis, who founded the social enterprise ‘Whenua Warrior,’ is passionate about food sovereignty, and has a vision that all people of Aotearoa will have access to locally grown food. Based at Ihumātao, she shares her perspective on how te reo me ngā tikanga can be used to help people take steps towards food sovereignty. She notes karakia as being a key first step in connecting to the spiritual value of the whenua. According to Kelly, our thoughts and our words have energy, and as we think and speak, so too will our plants grow.

Kelly also looks at the ecosystem as a whole. How can we nurture the well-being of the soil with practices such as composting and crop rotation to restore the mauri (spirit/life force) of the whenua? How can we begin to reintroduce systems of trade that are built on trust and community, rather than systems of organic certification which charge the earth, and make safe, nutritious food an exclusive privilege rather than a right? Growing kūmara on what would be million dollar land might not be an act of self-determination for the faint-hearted, but Whenua Warrior is working toward a more ambitious mission of healing the whenua, and the people.

Te reo Māori me ngā tikanga are more than just relics of the past. They are windows into a way of living in coexistence with our environment— this will always be a relevant and worthwhile conversation. As the climate crisis and feelings of uncertainty grow, nurturing sustainable food systems is not merely a practice in survival, it is a practice in healing the earth, a practice in restoring relationships, a practice in raising both our children and our families within the village.

“Nothing in this world was created, or simply emerged, to
exist in isolation. Even the invisible can be detected by its
impact [on something else].”

This is always a valuable lesson that reminds us to think about our roles and responsibilities as part of the whakapapa of food. It arrives to us from the past and continues into the future, with our mauri in hand. How have our hands carried this food, for the earth and our waterways who will ultimately inherit all that has passed through us?

Whanaungatanga
For the Love of Soil