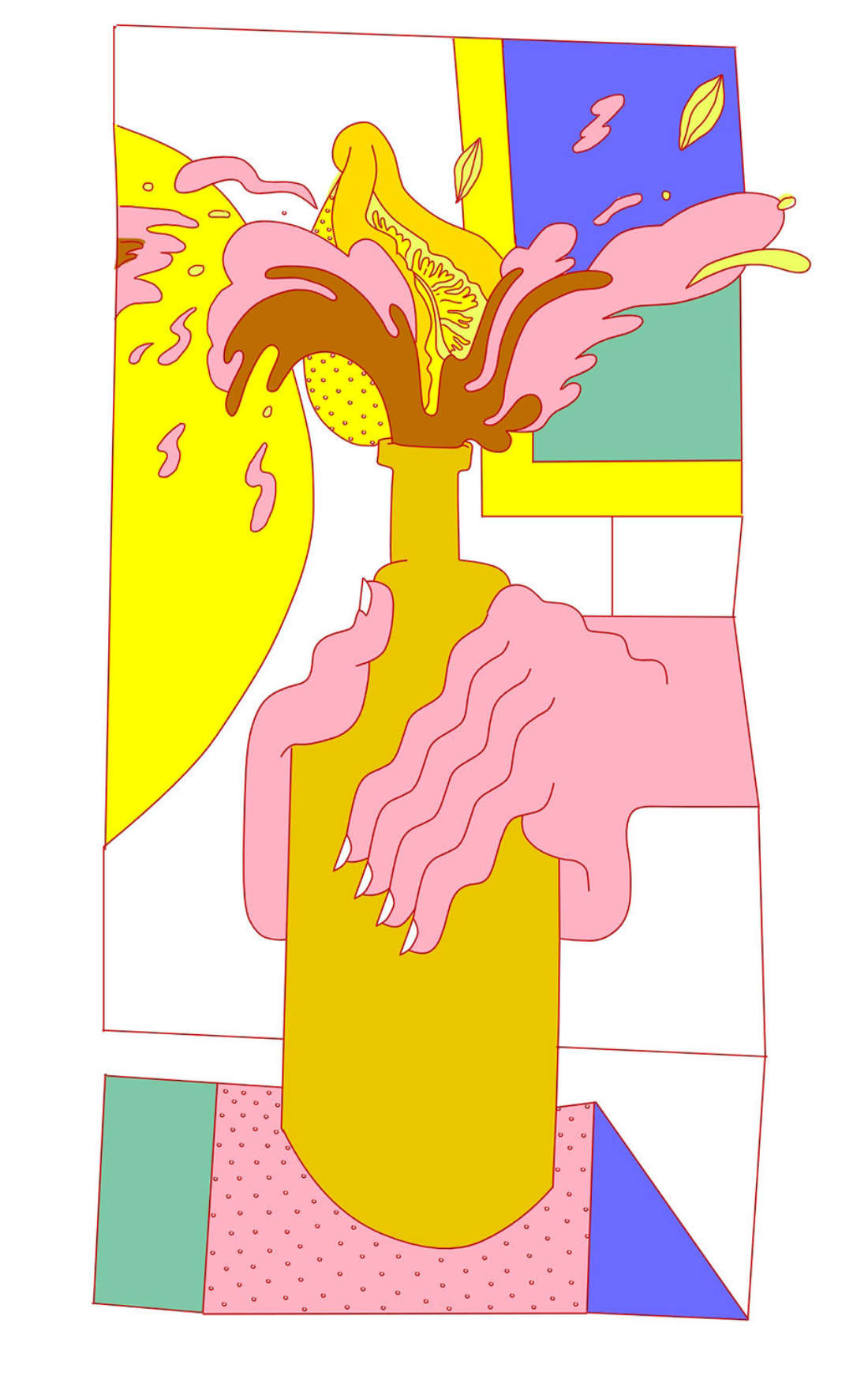 Alice Neville is a female human who likes to drink beer, and she’s just about had it up to here with your sexist shit.

‘Smash the beer patriarchy’ is a phrase I trot out good-naturedly whenever I encounter an example of everyday beer sexism — the likes of being immediately directed to the wine list at a dedicated craft beer bar, or when some bloke attempts to mansplain the IPA I’m drinking to me.

Some months ago (possibly after a few beers, rather than the patriarchy, had been smashed), I had a passionate conversation with Stone Soup’s Aaron McLean about this, which (allegedly) culminated in me promising to write something.

I figured he’d forget all about the conversation, but alas, he did not, so here I am.

My hesitance to tackle this issue stems from a fear of coming across as whiney, coupled with the niggling thought that writing about gender and beer might exacerbate the division by highlighting it — akin to how female chefs get justifiably annoyed when they’re given their own award category — with a bit of “it’s-a-big-issue-and-I-can’t-be-bothered” thrown in for good measure.

Yet, the fact is that by and large, beer is still seen as a beverage for blokes and the beer industry is dominated by males, and I’d be lying if I said that didn’t irk me.

For the most part, I’ve found the beer community in New Zealand welcoming and inclusive and as craft beer goes increasingly mainstream, more and more women are getting into it. In my friend circle, at least, I reckon more of the wimmin are into decent beer than the guys, many of whom seem content to chug upon green bottle after green bottle.

But I still feel like I’m in the minority as a girl beer drinker — particularly in Auckland, where I live, which lags behind my hometown Wellington when it comes to embracing the craft boom.

And surprisingly often, I’m still pointed straight to the wine list (even at a beer-focused place), or, if I’m studying the taps with a frown on my face, some well-meaning barman will presume I’m perturbed at the array of big-flavoured brews on offer, and suggest a nice light lager or perhaps a cider to appease my delicate taste buds.

The very idea of there being such a thing as a “girl’s beer” is, of course, ridiculous — and it pains me that this still needs to be pointed out — but the idea that females favour the sweet and bland over the hoppy and bitter persists.

In February 2017, the New Zealand Herald ran an article about DB and Lion launching flavoured beers to cash in on the growing numbers of female beer drinkers — who apparently like their beer to taste like lemon-scented dish-washing liquid. “We’re seeing women pick up a DB Export Citrus for example over a glass of wine, so that’s really opened things up as well — there’s so much more choice,” the story quoted Brodie Reid from ad agency Colenso BBDO as saying.

Don’t get me wrong, I have nothing against a shandy every now and then, but I’d have to be bloody thirsty to resort to a DB Export Citrus.

In a well-meaning but poorly executed marketing stunt earlier this year, Scottish brewing giant BrewDog attempted to send up lazy gendered marketing like this by releasing a pink IPA it satirically dubbed “beer for girls”. Problem is, it ended up looking like just as lazy a marketing stunt as what it was trying to send up, and they were ripped to shreds for it.

Sure, the craft scene is generally less blatant than “big beer” when it comes to sexism, but it’s still there. Take the Facebook group of beer subscription service Beer Jerk, of which I’m a member. I have no beef with Beer Jerk or the people behind it, who seem like decent folk, but a few months ago a member posted an extremely lame meme, along the lines of some guy saying: “Bud Light? You’ll find that in the tampon aisle.”

In my head I composed a comment — which I never actually posted — asking the guy to explain (or mansplain, as it were) the meme to me. “Hi Roger/Steve/Brendan (I forget his name and I can’t be bothered scrolling through Facebook to find the actual post). Sorry, I don’t really understand this meme, would you mind spelling it out for me?”

To which of course he would have to say Bud Light is a rubbish beer that only absolute pussies drink — the kind of people who might be found shopping in the tampon aisle. Like people who menstruate. Because, you know, if you have a vagina and sometimes blood comes out of it, you drink shit beer.

Of course he wouldn’t say that, but he’d be forced to think about why he found that meme funny, and I’d then get to say something about menstruation, which would make him feel uncomfortable. Win-win.

I don’t even think you can get Bud Light in New Zealand, of course, but I’ve never quite understood why it’s presumed that girls are the main consumers of tasteless beer. Anyone who’s been on Tinder will tell you that every second dude is grasping a green bottle in at least one of his pics, or — if he’s really feeling fancy — he might be swigging from that bastion of basicness, a Corona.

Men, of course, are largely the public face of craft beer, whether they be brewers, beer writers or bar owners. There are exceptions, of course — awesome women like beer writer Alice Galletly, Beervana boss Beth Brash and the ‘Beer Baroness’ Ava Wilson — but there ain’t many of them.

Perhaps it stems from the fact that men tend to be more confident in their abilities than women, who often doubt themselves more — the whole ‘imposter syndrome’ thing. As a food writer who’s fairly obsessed with a good brew, I have often fancied delving more into beer writing, but I’m held back by a fear I’d be sprung for not knowing what I’m on about.

On that note — and I should preface this by saying that I’ve worked with many male beer writers who are total GCs — over a period of several years, a prominent beer writer regularly emailed his column to me for editing. He repeatedly ignored my attempts at engaging in beer-related banter, so I gave up after a year or so. In one last-ditch attempt, however, I mentioned I was a big fan of the beer he was writing about, which resulted in a rare response: “Hi Alice, are you accidentally learning about beer from my column?”

And admittedly, all I know about beer comes from drinking a shitload of it, reading a few stories and dabbling in home brewing, but it’s just beer, right? A (male) journo friend of mine, who readily admits to knowing bugger all about beer, has a sweet gig reviewing it for a trade publication — the kind of confidence only a man could possess, surely.

Recently there’s been a lot of talk about saturation in the craft beer market and poor-quality beers flooding in. This may be a bold assertion, but I can’t help but think that that uniquely male brand of overconfidence might be partly to blame here — average home brewers who jump on the craft bandwagon and reckon they can make a buck with a shitty name, a tacky label and a whole heap of self-belief.

Speaking of shitty names and tacky labels, that’s another area where the beer patriarchy is in full force. In the US and the UK there have been campaigns against beers with names like Top Totty and Dizzy Blonde that feature big-breasted pin-up girls on the labels, and it’s had some effect, with brewers’ associations taking steps towards banning them from competitions and the like.

I’ve always thought we weren’t so bad here in little old NZ — the only beer labels that offend me are ones pedalling shoddy design and grammatical errors. Then again, maybe I’m a hypocrite. I’ve heard of some women taking issue with ParrotDog Bitter Bitch, which I have zero problem with — it’s one of my favourite beers. Ditto Liberty Sauvin Bomb. I should probably object to the scantily clad woman riding “a savage hop bomb”, as the Liberty website puts it, but it’s never even crossed my mind — probably because the beer is so damn good. And Liberty C!tra features a decidedly yonic (look it up) hop-covered lemon split in two, which is surely a pro-vag label if ever there was one.

In sum, I feel optimistic that although we might not be smashing the beer patriarchy as forcefully and spectacularly as I would like, we’re chipping away at it, slowly and subtly. It only takes a quick Google search to a find a wealth of stories that have emerged over the past few months from beer-loving women who have had enough of this shit — to start with, check out beerandsexism.com, where “women share their stories of mansplaining, misogyny and beer”.

Because talking about it, of course, is the first step, and the #metoo movement is inspiring women from all walks of life to challenge not only societies where sexual assault and harassment are normalised — obviously the biggest issue here — but the little things, too. Like being directed to the wine list.